First Norma Jean had surgery to remove a tumor from the side of her face. Then Sydney had her vet visit. I was surprised when Dr B reported that she was a good girl. She had surgery on her eyelid. Finally, yesterday was Mackey's turn to visit the vet. 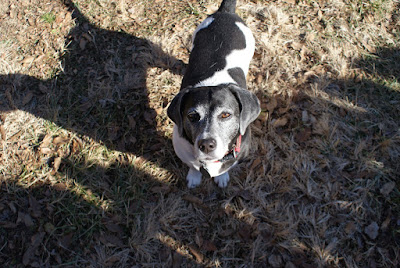 Mackey has been healthy except for her seizures and so far this year she's only had two. She needed some vaccines and an overall checkup. I pointed out a couple of small bumps, one on her side and one on her neck. 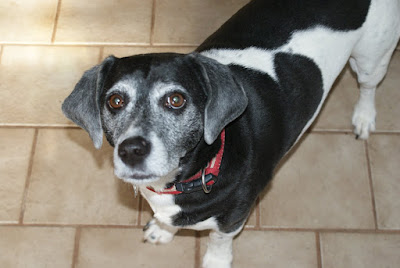 When Dr B brought her out to us he said she was quite wound up. That's vet speak for she acted like a crazy wild animal. His report wasn't what I was expecting. First I was sure he'd tell me to put her on a diet but he said her weight was ok. He said that since her seizures are infrequent that we won't do anything differently but still treat her with valium.

He said the bump on her side is a fatty tumor but he doesn't like the one on her neck and it needs to be removed. Also he managed to get a look at her teeth and she has cracked a molar. It's a bad crack and the tooth needs to come out. He'll do both surgeries at the same time. We're planning on doing it in September. 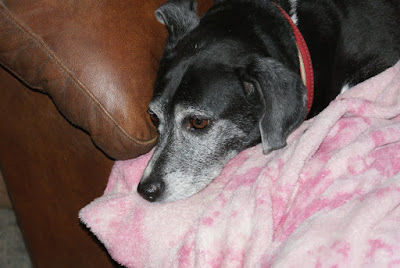 Mackey was very happy to get home and the vet techs were probably happy to see her go. This new system of letting the dogs go in without us is hard on everyone.
Posted by Sue at 8:24 PM

It sounds like an uneventful trip which is a very good thing.

Poor Mackey. Molly hasn't been to the vet since the pandemic started, thank goodness. I can't imagine sending her in without me but I know that it happens. Lots of AireZen and positive vibes are heading your way, Mackey!

Some good news, some more concerning. Hope the lump and the tooth can be taken care of without much ado. Misty never minded going to the vet, but with this new setup where they go in with a tech seems to make her more nervous. Or else it is her recent bad experiences:(

Gald it went fairly well. We have to take our wild one soon and I really don't know how they will handle him.

oh Macky, I feels ya my furiend. Let's see, I gots to gets a biopsy on a new lump, and the dogtor said I needs a toother cleaning! the nerves! I have NEVER needed a toother cleanin'! sigh. Wells, Ma said after almost 12 yrs, maybe it's time ☺
Anyhu, I gots my paws crossed real tight for you my pal, and sendin' lots of POTP and AireZens your way!
Kisses,
Ruby ♥

Thatcher had to go to the vet about 6 weeks ago, and he did not like being kidnapped from Patrick. He's an odd dog who doesn't like car rides, but he was in the car like a crazy dog when they brought him back out. I hope all goes well for Mackey in September.