It's still hot but everybody is getting bored, dogs and humans. During the afternoon I just had to get out of the house and walk around so we went to the library. I got to see different walls and move a little and it felt good.

When we got back the dogs were so antsy that I finally relented and we took them into the yard and turned on the hose. I don't like them to get wet late in the day because I don't want them going to sleep for the night while they're still damp. Norma Jean had trouble with hot spots last year and I think being damp contributes to the problem.

They couldn't wait any longer so I made an exception to the rule. Here are three different water play techniques they use.


This is the 'paddle splash' demonstrated by Norma Jean. This is a common technique used by many of them including Fudge and Noah.

Samba demonstrates the 'head fling'. This is a less often used technique but comes in handy for splashing Fudge in the face when he comes too close.

This is a combo of 'paddle splash' and 'full face' techniques. Samba and Tess favor the 'full face' approach, although the others try it occasionally.

Rob sprayed everyone except Bailey and Tsar who were too busy hunting for rabbits at the foot of the hill. They found no rabbits but didn't give up until I herded them inside.

Morgan decided after being sprayed that she should roll. Unfortunately she chose to roll in the dirt instead of the grass and wound up looking like this. 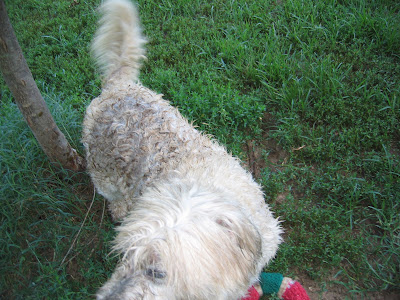 Due to the excessive amount of dirt clinging to her she had to remain behind and have a bath before coming inside with the others. 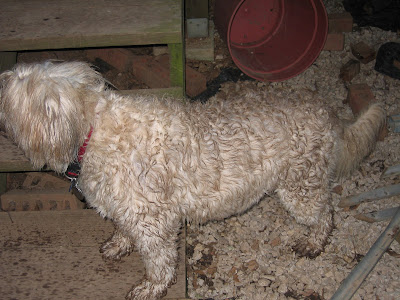 We drifted off to sleep last night to the aromatic scent of damp dog, but everyone was in much better spirits. There was a thunderstorm overnight, so we're hoping the temperatures come back into the normal range soon.
Posted by Sue at 11:25 AM

if you left them out in the heat longer they would go to bed dry. Just sayin'. So sorry to hear about Dakota. Hope the heat breaks for you soon. g

We aren't too far west of you so we totally understand about the heat. We had a big storm last night too but it is just glorious here today. We are headed out for a walk with Mom now. Nice pool techniques.

That is just to cute! Your dogs are having a great time in the water ♥ I loved seeing the videos.

Good water play techniques, Guys!
And that´s a great way to refresh and have fun!

It's so wonderful that I get to see them move! I love those little movies of them. They sure do love that water!
x

I love those curls. We're having great weather, and I truly feel guilty. It's here all week... load up and drive east.

That dirt sure does stick out on Morgan. I should go thank Marge for being born with minimal white on her... at least they all had fun!

That paddle splash is too funny! We watched the video 3 times!
You guys sure do love the water!