Every time we introduce something new into playtime, we get interesting reactions. Last week when we tied bandanas on the dogs was no exception. 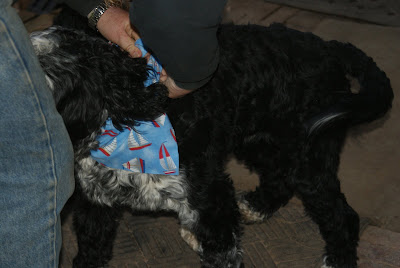 Tess getting her bandana tied on. 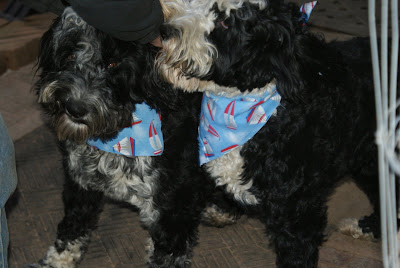 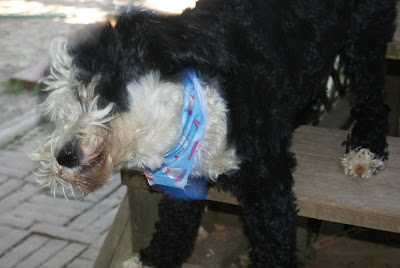 I guess she thought it felt strange. She had to shake her head and see if it was still attached. 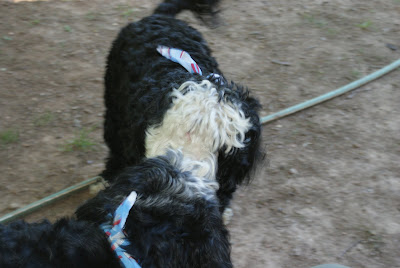 They had to check each other and see what these things were. 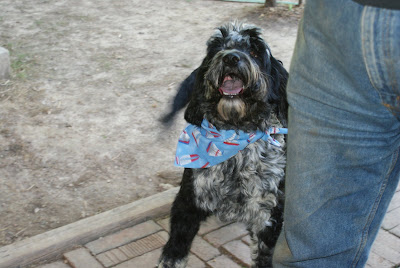 Tess decided she looked pretty good in a bandana. 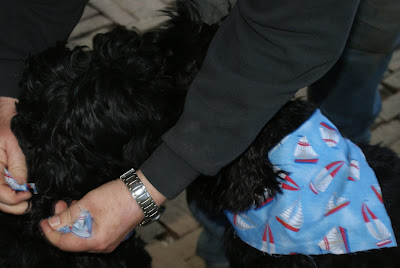 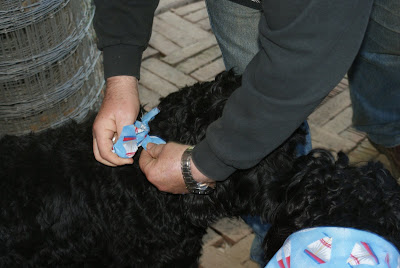 It's much easier to do without their help. 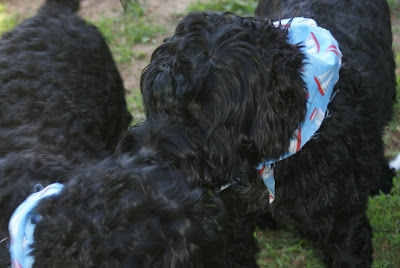 Again they each had to check out the other one. 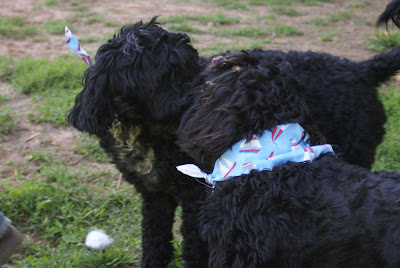 Without exception they seemed excited to be dressed up and were jumping around and showing off how pretty they looked. 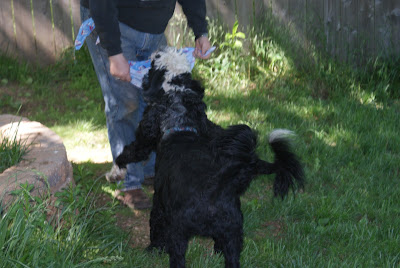 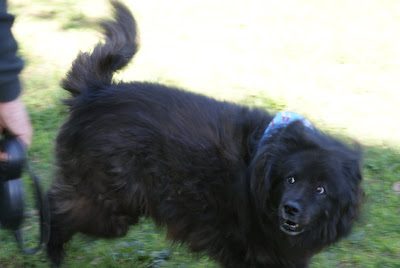 At first Tsar was wary. He was sure that wearing this thing was some sort of plot against him. 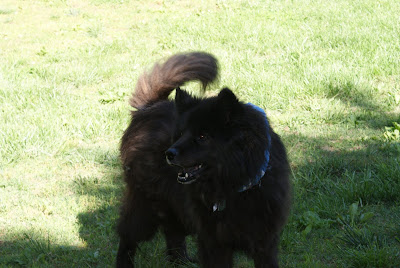 After receiving a lot of praise and being told how handsome he looked, he decided this was OK and maybe it was even a good thing. 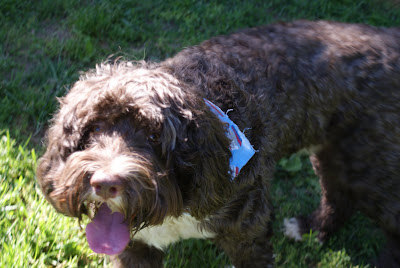 Fudge and Samba did their little happy dance, then settled down. Fudge always thinks he looks handsome, no matter what he's doing.

Please join us and our doggy friends on June 10. Just tie something blue, a bandana, a scarf, a ribbon, etc on your dog, snap a picture and email it to me. I'll post them all on my blog. We've gotten some great pictures in already. The more the better.

Don't forget to check out the other Dogs On Thursday. Be sure to leave them a comment and say 'Hi'.
Posted by Sue at 1:00 AM

i adore these -they all look fantastic, can't wait to see all the others.what a great idea, do some more please. happy doggie thrusday, i will post mine later, i am at school. hugs.

How fun! I love the photo essay :)

We emailed ours to you yesterday and the girls had a great time posing in their blue scarves.

Love it! Storms plot against us, and Gretchen refuses to wear a shop towel, but BB photos will come from our corner of the world.

Sissy loves to dress up. Gretchen is just going to have to learn...

How fun!!! Fuji always thinks I'm being so mean to her when I dress her!:( Happy DOT!!

I bought exactly the same fabric to tie on my dogs. Now to rip it into big triangles and tie them on! I can't imagine what photos you are going to have for next week as these leading up to it have been fabulous! g

They all look so pretty and handsome in their new attire!
x

How sweet they look with their little scarves. I will look for something blue for Charli. What fun ♥

I can't wait to see all the pictures and I hope you'll be posting all of yours, too, as a finished product!

I don't know why the blue, but I'll try to get Thor to participate! He's not big on dressup. Your pack always looks so happy and energetic!

I just love the doggy tie one on show!
Your packs antics always make me smile!

Elise and I will send you a picture of her in a blue something later today.
:)

It may have been tough to accomplish but the results were worth it! What cutees! Pretty soon they will come running when they see you get the bandanas out. Happy DOT's

Hi guys! Those bandanas look great on you! We are bandana fans too!
Kisses
Rufus and Indie

Mom just took a photo of us in our blue bandanas! She's going to email the picture to your mom asap!

Gotta find something blue to tie around their necks so we can join you.

....and you do the very best ten-pack :D
Love the bandana shots, they all look great- blue is definitely their colour- and i'm sure Fudge IS handsome whatever he's doing!
Can't wait to see the rest of the photos.
Slobbers xx

I always enjoy your photo essays of the kids, but these made me lol! They are so funny showing off their fancy outfits. Hugs to all the pretty pwd's!