I just received an email from my sister-in-law, Michele. She told me that they had to say goodbye to Bo. 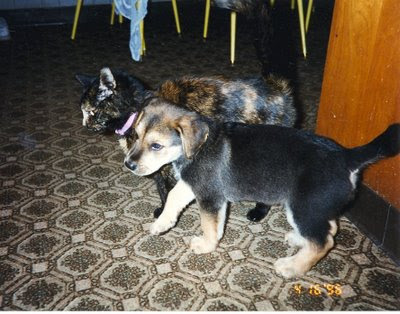 I'm not sure of Bo's dates, I'll get them later from Michele, but I believe he was about thirteen years old. He was part German Shepard and part Golden Retriever, a big boy. He was named for the Boston Red Sox, my brother's favorite team.

Michele and Dan adopted him shortly after my nephew was born and there could not have been a better dog with kids. He played with my niece and nephew as if he was their sibling. They used him as a pillow when they watched TV.

Bo had one bad habit. He liked to escape from his yard and go see his dog friends in the neighborhood. I remember a couple times during visits to their house when we all set out to wander the neighborhood with a leash in hand looking for Bo. When we found him, he didn't run. He was happy to see us and let himself be escorted home. He was an easy dog to walk, never tried to pull you off your feet, just strolled along next to you.

I'm sure my niece and nephew will miss him terribly, he's always been there, a part of the family.
He had gotten to the point where he was having trouble standing and walking and life wasn't so much fun anymore. 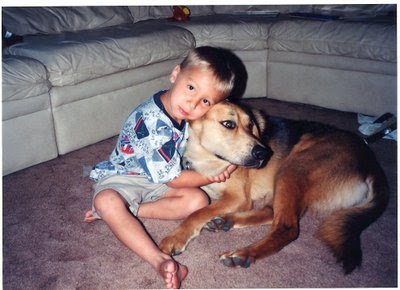 Bo knows... Wasn't that a string of commercials or something, featuring on Bo's namesake?

He was clearly well-loved, and that means he is sorely missed. I'm so sorry for their loss. It's never easy to say good-bye to our noble companions.

The saddest of days. Rest in peace, sweet Bo.

Rest in peace Bo... a very handsome man you are!

Very sorry to hear about the loss of a beloved friend. Godspeed, pup.

Sincerest condolences on Bo's passing. So sad to lose such a wonderful member of the family. Hugs!

Bo does know. I have a really hard time with anyone named Bo passing (even if it is spelled wrong.)

So sorry to hear about Bo.
Rest in peace, Bo.

We're so sorry to hear about Bo! He's going to be missed. Our thoughts and prayers go out to his family.

Aww! So sorry for your loss. Thinking of everyone who loved and misses Bo.