We had a very nice holiday yesterday. Rob and I stayed home all day with the dogs and it was very relaxing. Of course, we went outside every couple hours as usual, but in between outings I managed to get some cross stitching done. 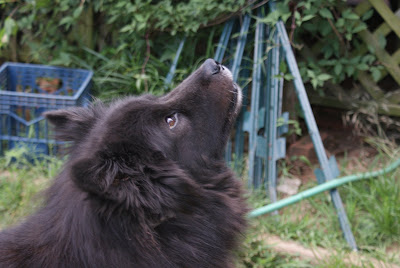 Tsar noticed it first. Is that rain? Yes, it rained off and on all day yesterday. It was a gentle rain with no thunder. We all went outside in the rain and it felt pretty good after the heat we've been enduring. 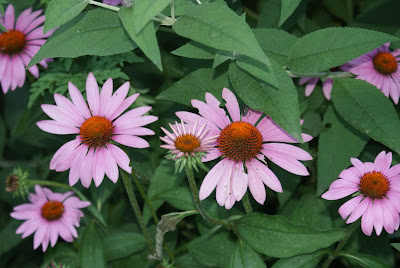 The rain was most welcome to my poor garden. We have soaker hoses buried in the gardens and we used to turn them on regularly, but my Water Dogs discovered them (I think they can smell water) and try to dig them up. This year I have used them sparingly and hoped that the plants can adjust. When the dogs play in their pool, I use an old mop bucket to bail the water out and use it on the plants in the garden. Why waste all that muddy brown water? 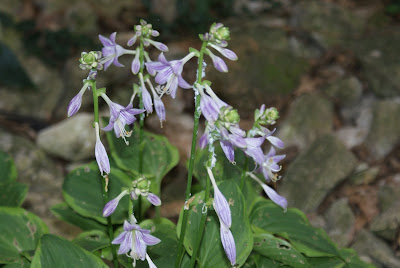 The flowers are showing the effects of the recent heat, but now that cooler temps are here I'm hoping they'll recover. 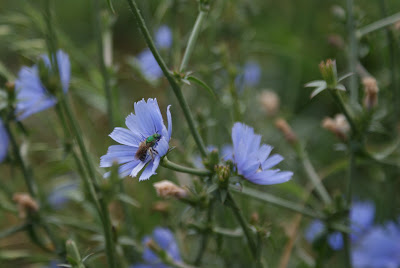 See the firefly on this flower? 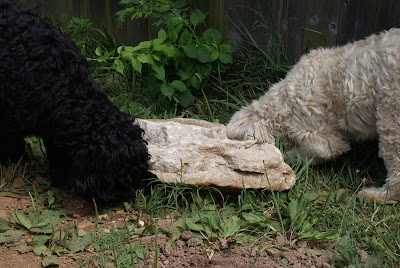 This is a rock that Rob removed from the pond site. Morgan saw a lizard go under it. She tried to stretch her paw in after it, but couldn't quite reach it. She and Bailey wanted to catch that lizard. 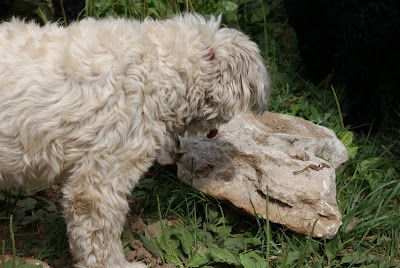 Morgan wouldn't leave the rock. She knew there was a lizard there and she wanted it. 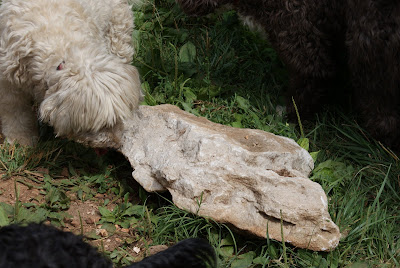 She believes that sooner or later it has to come out and she'll be there to catch it. Finally, Rob lifted the rock and sure enough there was a lizard. It made a run for the fence and because Morgan's eyesight isn't so good any more she didn't see it in time. It ran under the fence and is safe for another day.

I broiled steak yesterday and we had it with shrimp and some macaroni salad and fruit. Yum. The day before Rob ate barbecued ribs at Ziggies and he brought home a box of rib meat removed from the bone and mixed with rice. For their holiday meal the dogs had rib meat and shrimp tails on their kibble, or as we call it 'surf and sty'. It may not sound good to you, but they thought it was great. No complaints.

When the neighborhood started shooting off fireworks last night there were few problems. Morgan refused to go outside and Rob had to leash her and drag her into the yard to pee before bed. The only other one to pay any attention to the noise was Noah who would run to the door barking, then come back wagging his tail to let us know he was on guard duty.

The rain continues today and that's fine with us.
Posted by Sue at 11:55 AM

I'm glad the rain showed up to break the heat and water your pretty flowers.

My girls go on lizard patrols too. Gretchen is probably quick enough to catch one if ever she sees it soon enough!

What good gaurd dogs you have. I'm glad Noah was on Duty for you. My guys handled it ok - which is good because it's (fireworks)been going on for a week and will last for another. g

yes, we had some rain too, broke this terrible heat, whew. poor snuffs, she doesn't do thunder/lightning or fireworks. she gets demented and we have to close all the curtains, even in the middle of the day, and put the radio up loud, and cuddle her all day long. i think they feel the drop in barometric pressure. lizards, no, but the cat next door, oh you bet!

Glad you finally got the rain that you needed... and guess what? We finally got some SUN! It won't last for long... rain coming back soon, but still...

Awww, steak?! Shrimp?! Macaroni salad?! Why didn't you tell me - Marge and I would have been out there in a hurry to dig in. Those are some of my favorite foods.

Your garden is beautiful - I'm sure the lizard liked it too up until the Portis scared him away! And I'm glad you got some much-needed rain.

It sounds like you had a wonderful weekend. I think your flowers are beautiful ♥ It looks like everyone had a great fourth ♥

Such pretty flowers. We see a lizard running by us on our walks but have never caught one. Mom worries about the snakes she sees in the yard every once in a while but they are usually harmless ones.

Cute flower pictures! I love when it rains. Too much sun can be so exhausting.

Glad you got some rain. We saw you on Mitch & Maggie's blog. Thought we'd drop in and visit. Enjoyed the pictures. We like to stalk and chase things too. Drop by and visit us sometime when you get the chance.
Wags
Ernie & Sasha

We actually had 2 days sun with no rain. The rain is back today. Thor will gladly share his rain with your pack. I just found your previous post about the self serve sushi bar, too. I believe Thor might like that. He's never had shrimp tails, but after this post, I may toss him a few!

Your flowers are just beautiful! We had no idea what a firefly looks like up close and personal! We only see them lighting up at night when we go out to peepee before bed! See, we learned something new today!
We're so glad you got your much needed rain!