Those short haircuts that we had such a short time ago have really grown out. Here is Fudge recently. You can't see his eyes and his ears are way too long. I'd really like to cart them all off to the spa and let C handle the mess, but I'm trying to cut costs a little, so I'll take you on a tour of my at home doggy torture chamber. 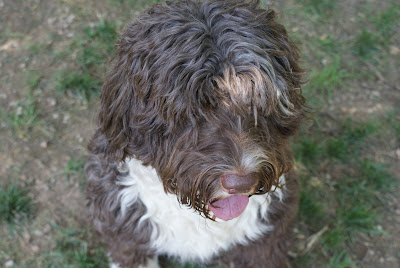 The tour starts in the garage. 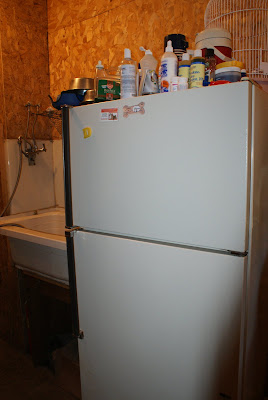 Here we have the refrigerator, one of dog's best friends. It holds our supply of yogurt and green beans and in the top freezer part there is a stash of Frosty Paws waiting for a party. Sometimes there are carrots, apples or even watermelon waiting in there. Lola and Bailey have figured out how to open the door, but they know they aren't to touch anything. Still when I open that door, I suddenly have everyone's attention. 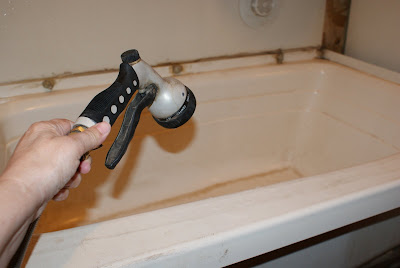 As you can see in the picture above, next to the refrigerator is the doggy bathtub. This is also where the bowls get rinsed out after breakfast and the water bucket gets filled. Sometimes it actually gets used as a bathtub. None of them especially enjoy baths. They do tolerate them. The tub gets used more for rinsing off dirty feet than for anything else. If someone rolls in something unacceptable, they are immediately escorted to the tub. Sometimes it just occurs to us that they need a bath. Fudge sometimes starts to smell a little gamey and is taken to the tub. 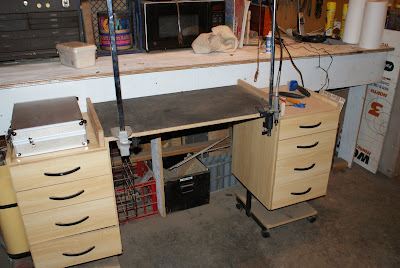 Here is the worst part of the torture chamber. The dreaded grooming table. It's actually Rob's art table serving double duty. I need a good grooming table and this isn't it, but until one comes along, it'll do. The unhappy dog is placed in the center and there is a noose for those who get squirmy. The other shiny pole in the picture is the stand for the dremel tool, used on nails. Yes, that's a microwave in the background. If I need to heat something for a special diet, it comes in handy. 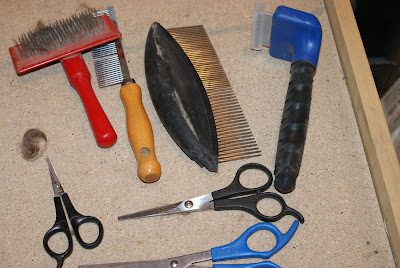 Here are some of the torture tools. All the dogs like to be massaged and even brushed. What they don't like is having to stand still for long periods of time. Some, Fudge, Morgan, Sky and Norma Jean stand very nicely. The others squirm and want to change positions or twist around to see what I'm doing. It can be a challenge. 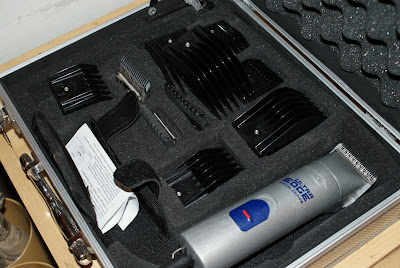 Here is the doggy hair stripper, also known as the clippers. They are all used to the sound of the clippers, so that isn't a problem. The problem is with me. I have had so many hand and wrist injuries and surgeries that I don't have a lot of strength in my hands anymore. It's hard for me to handle some of these tools and I can't do a whole dog. I prefer not to have them running around half shaved, so I just do minor trimming and let the professionals handle the rest.

Today my plan was to trim faces and tails and and give them a quick once over. Fudge was my first victim. Here is the after shot. Rob says I took too much hair off, but I wanted to see his eyes and now I can. He was a good boy and stood still for me and got several treats during the ordeal. He doesn't look too happy about his haircut, does he?
Posted by Sue at 12:58 PM

no he doesn't, but he does look so handsome now...gotta love his expression. hey your torture chamber is so well organised, which i guess you gotts be with such a big gang. ours is:
1) find snuffles
2) i hold her while hubby strips to his underwear
3.) snuffs on his lap, looking very woebegone
4.) all done, lotsa treats and praise...
can't imagine that over and over
you are a star!!!

He does look like he's frowning, but it's hair - it'll grow. And for the record, you said Fudge is one of the good boys who stands still :) g

My goodness I am away for a few days and my favorite doggies are getting up to all kinds of stuff. I think Fudge looks very handsome with his new haircut. It's nice to know he survived the "torture chamber"!
x

While you guys look fantabulous (and I do love the curly hair. It is like my ma ape's), I am glad I do not need to visit the Torture Chamber. I don't even like being brushed.

ps. Thank you for visiting my blog!

I think he looks adorable! Your so lucky to have a gooming station! I can only do so much tackling in the floor (ha).

Today is my grooming day, Fudge, and I'm sure happy about it! I love short fur and staying cool!
We think your mom did a great trim job on you!

After seeing this post, Marge has decided she is never coming to your house! She HATES baths. She does like to be rubbed with the curry comb, though.

Fudge looks very handsome after his grooming. I would want to see those pretty eyes, too.

You're adorable, Fudge. I think it's wonderful that you stand still for your beauty session!

I groom all my dogs also. It's interesting to see someone else's little space.
I have to tell you that the "Paws" tool for their nails? I saved myself a bundle by going to my local hardware store and getting a little hand held circular grinder with sandpaper on the tip.
It worlds like a charm, and no body ran away. No cutting, no bleeding, no fear.
Let me know if you know what I'm talking about. I can get you the proper name of the tool. I LOVE IT!
Happy Weekend
Love Claudie
xo

Mom would love a big tub like that, but we don't - that would mean more baths for us. And that torture chamber is scary too. We just go to the groomer and bear with it. But at least we don't have to go too often.

He does look a lot nicer now that we can see his lovely eyes.

I think Fudge looks very handsome in a disapproving way!

I think Fudge looks very handsome with his new 'do.