It's All Good News

Samba has had some changes lately in her treatment and in her condition. So far it's all been good. 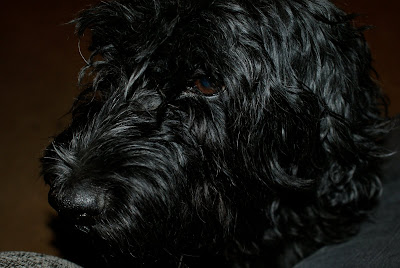 First, her left eye is much improved. She can now blink and as you can see above, it looks almost normal. The right eye is wide open. She can't blink and it doesn't even close fully when she sleeps. I'm still putting ointment in both eyes a couple times a day to keep them moist and I've kept her bangs long to provide some protection from the sun. 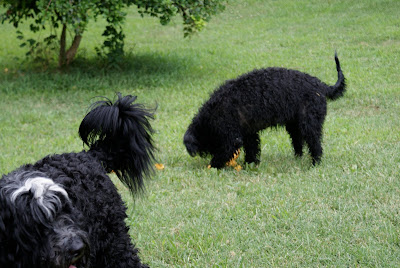 Although she still doesn't have feeling in her lips, she enjoys playing with the other dogs and here she's ripping up a paper airplane that she caught in mid-flight. The lips cause some problems still when she eats, but she's doing better and drops less food than she used to. 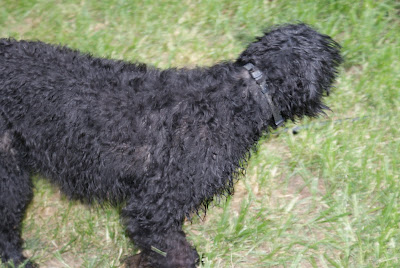 She's on thyroid medicine and her hair has grown in to cover her body. Her legs and tail are no longer naked, but as you can see, her hair is still very thin. Dr B increased her thyroid dosage and a blood test taken a couple weeks ago shows that her thyroid level is now perfect. He says we should see big improvement in her coat over the next three or four months. 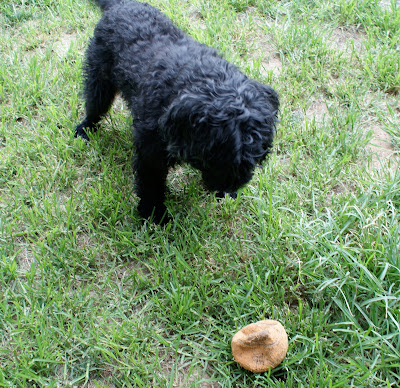 As for the MMM, she has been showing no signs of a relapse. The other muscles in her head are taking over the job of the destroyed jaw muscles and the dents in her head are more shallow because of it. She can yawn and move her jaw almost normally. 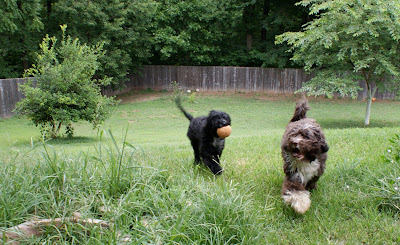 A couple times each day I have to apply pressure to the points where the muscle is damaged and watch for any sign of pain. Then we have to throw her ball and make sure she can pick it up and carry it back to us. We also try to get her to gently tug on a toy. Samba has never been much of a tugger dog, so that one is hard to do. So far she's doing well. 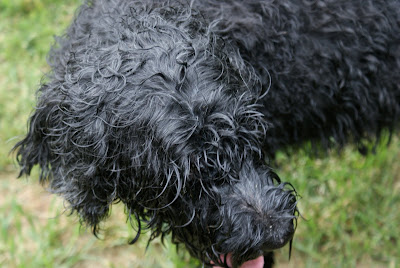 Our eventual goal is to get her to 20mg of Prednisone every other day for maintenance. We're in the home stretch and this is the dangerous point where the disease sometimes flares up. I have to watch her closely now. With hot weather here, Samba would like to go swimming. I'm concerned about her compromised immune system and discussed it with Dr B. He says she can swim in the lake, but not in any still water such as a pond. We were both happy to hear that and now we're planning a trip to the lake for her to get wet.
Posted by Sue at 12:05 PM

Samba, I sure hope you continue to get better. I hope you enjoy your swim. You deserve the best!

I'm glad Samba's improving. I've been thinking of her and will keep my fingers crossed that you have more and more progress in the coming months. She's a very strong little gal.

Good news is always the best kind! Have fun Simba!

That is good news I am pleased for Samba. Putting drops in her eyes dose not sound like an easy task, I know Bonnie would not do to well having that. best wishes Julie.C

Good luck with the prednisone reduction. Dogs can be even more stressing than kids, because at least kids will holler! I'm thinking of Samba.

Oops, my mom typed Simba instead of Samba :( she is all thumbs today.
Maggie Mae

P.S.: I like to rip up paper airplanes, too - but don't think I could catch them mid-flight!

Oh, more commenting problems! Grrr! I just wanted to say how glad I am that the news is good so far and I've got paws crossed that it continues to be all good.

We're happy to hear of Samba's improvement....all the medication and therapy appear to be paying off. Hopefully, she'll get better. The swimming sounds fun.

This is good news, Sue, and I know how attentive you have been to Samba during this problem. It all sounds good to me and I know you will remain vigilant! Go Samba!

oh we're so happy to hear that Samba is doing well. we would jump for joy if we weren't so tired from playing at the dog park. we will cross all of our paws that the reduced meds continue to work well for her and her ugly mean disease doesn't return. swimming sure would be fun.

What wonderful news for Samba! I know it's scary changing medicine regimens but we're all pulling for Samba!!

Glad to know Samba is doing so well!
A trip to the lake sounds pawesome!
Happy Sunday!
Kisses and hugs
Lorenza

We will keep our fingers crossed! It is good to hear she is making progress.

Enjoy your swim in the lake! We are glad to hear that you are feeling much better!

Six thumbs, six claws, and any number of fins up on this end. Hooray for the good news!

Hi Samba - I'm sorry to hear about your sickies but I'm glad that you're getting better now! You looked like you were having a great time in those photos! I hope you do get to have your swim soon - do you have any "canine hydrotherapy" places near you? My humans took me to that last year - the water was warm and cleaned all the time by special machines - and it was very good for doggies with sickies (although I just went for fun and to learn to swim coz I'm a wimp and won't go in cold water!)

ANyway, hope you continue to get better!

That sounds like great news and we hope Samba continues to get much better! A nice swim sounds great! Lots of love, Debbie and Holly

Samba,
I'm so glad to hear you're getting better! Have a great time at the lake.

Samba I hope you continue to improve. What a sweetheart you are. I hope you have a wonderful summer.
Hugs.
x

All of your dogs are so blessed to have you. You take wonderful care of them. I hope you have a great week.

So glad Samba is doing well, long may it continue!!!!!

Oh I'm thrilled for you! g