The whole world has been watching the soccer (football) arenas of South Africa for the past month as teams from all over the world gathered to compete for this trophy. 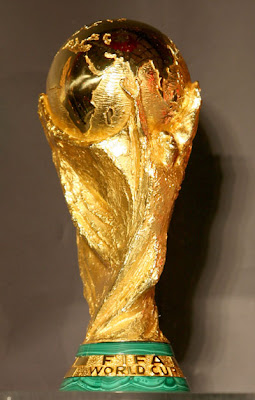 This is the World Cup and on Sunday it will go home to either Spain or The Netherlands. 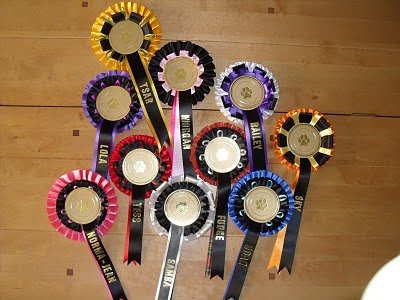 The World Cup is nice and would look good on the mantle, but we have some prizes that we like even better. 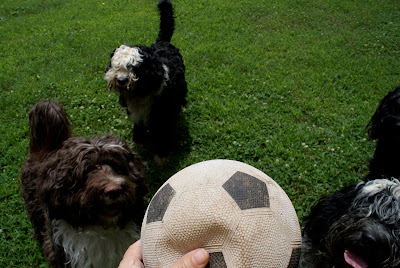 Remember a couple weeks ago when a tough match was played here in Missouri? 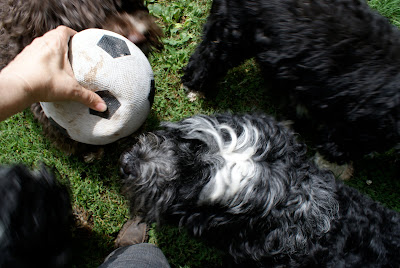 The players put as much energy into this game as any team in South Africa. 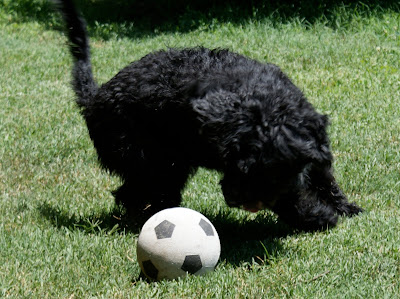 They played hard and now they have been rewarded. 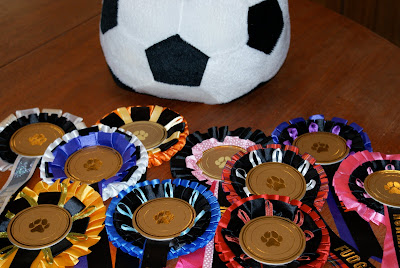 Look what arrived in the mail, all the way from Scotland. 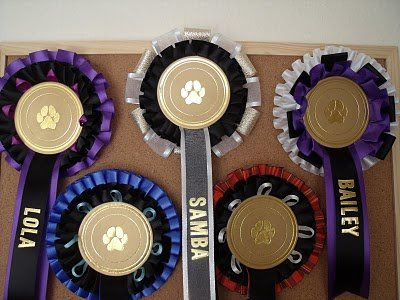 These beautiful rosettes were hand made by our friend Nicky. 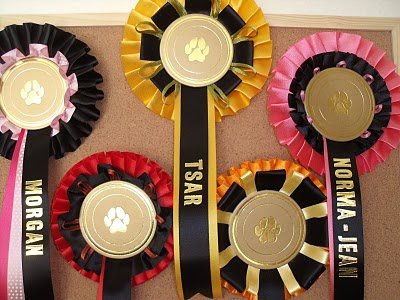 There is one for each dog, even Morgan and Tsar. Thank you to our Dughallmor Beagle buddies. We're as happy with these ribbons as the other team will be with the shiny trophy.
Posted by Sue at 2:12 PM

Congratulations! Those are pawesome awards!

Wow! Those are pretty darn special! I'd be pleased as punch with them!

Congratulations!!! Those are wonderful awards!!! Lots of love, Debbie and Holly

WoW! How cool is this. Of course they are very well deserved too!
x

Congrats.... Your awards are beautiful. Have a great weekend.

oh what grand rosettes for some grand doggies. much better than the world cup any day.

Congratulations - those are beautiful ribbons. g

What gorgeous ribbons and how nice of a friend to make them for you. I'd be so proud to display them.

Congrats on your pretty awards!

Wow! Those are beeyootiful! You should totally be proud of those!
The Road Dogs

How wonderful! That is very nice of your friend Nicky to do such a thing!

Thank you for coming to Simbas blog. We always enjoy making new friends. The probiotics have helped ALOT. Simba has Corn, Wheat, Milk, and other allergies and he was sick nonstop for 2 months (yeah, My lawn was a MESS). I was so thankful when Sugar the Golden Retriever sent us those. I've been using them since. He actually has gained 10 of the pounds back, and looks SO much better.
So, I definetly feel ya when it comes to Doggie Sick Tummys! My vet bill was higher than the house payment! LOL!

Licks of Love,
Paige and Simba

Oh my dog
Those wibbons awe magnificent..I think I like them even mowe than the wowld cup and it's vewy fitting, cause I think you awe fantaboolous playews!!
I woot fow youw team
smoochie kisses
ASTA
CONGWATULATIONS!!!!!!

What great ribbons. You are all winners. They really are furry, furry nice.

wow! you kiddos ARE winners! you have the ribbons to prove it. you play a tough soccer game. we would love to play with you. we all cheat. haha!