The Day The Snow Came

On Tuesday when we let the dogs out in the morning, they were delighted to see the snow. This was possibly the most snow they've ever seen and they had a lot of fun chasing each other around thru the drifts. 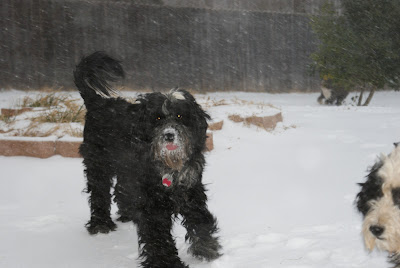 Noah seemed pleased and somewhat surprised that he could catch the snow on his tongue. 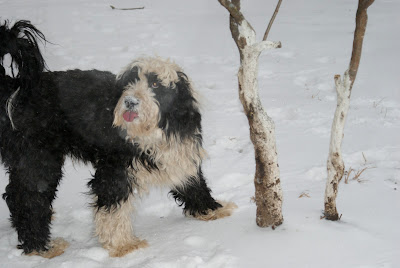 Norma Jean found a ball and decided to play with it. 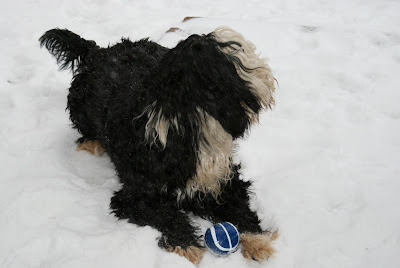 They seemed a little confused, mainly because the wind was so strong and the snow was blowing around. 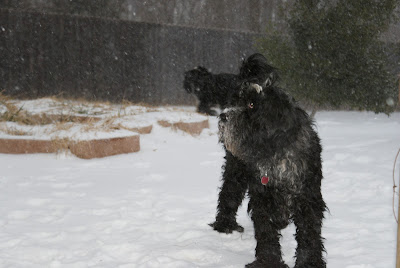 After chasing each other around for a while, they came to see what we were doing. 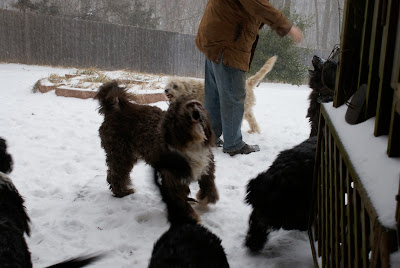 Fudge let us all know that he approved of the snow. 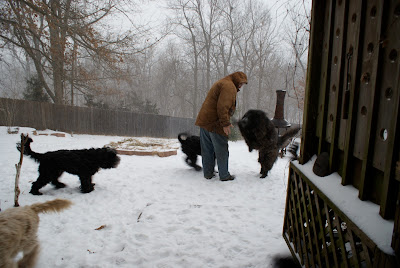 Tsar tried to tell Rob how happy he was with the situation. 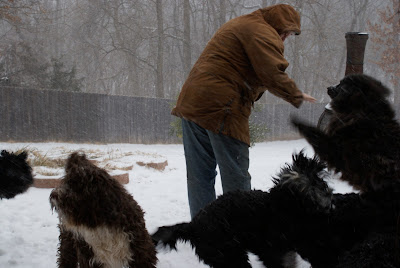 He wanted to play, but the others were ready to go inside and warm up. 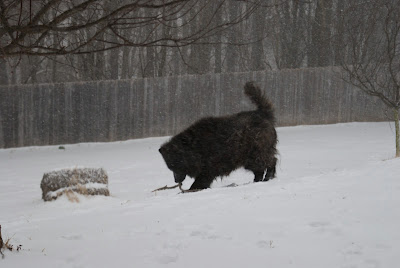 He was the only one left outside, but he wouldn't respond to our calls. Instead he found a stick to fight with. 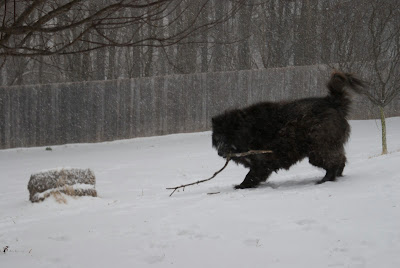 He jumped around and swung the stick in the air. He'd let it go, then pounce on it. 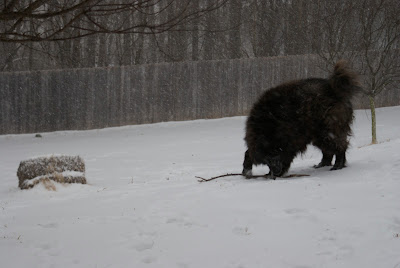 This stick needed to be subdued and he couldn't come in until he had it under control. 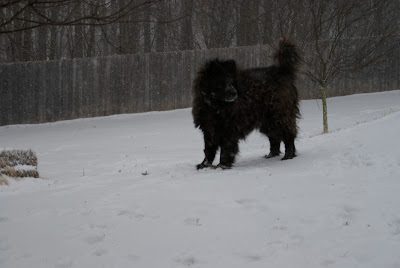 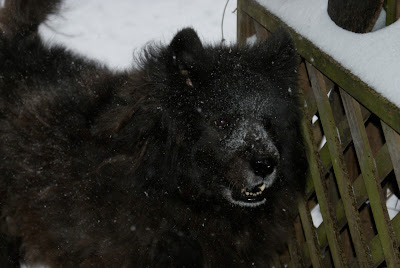 Today is a different story altogether. The temperature this morning was 0 degrees and although I told them to hurry, they went out the door expecting to play in the snow. Immediately their feet started hurting from the cold. Some came limping back to the house, a couple sat down or dropped down to the ground to protect their feet. I had to race around escorting them back to the garage. They're now all warming themselves in front of the fire. Our outings today will be few and quick.
Posted by Sue at 11:54 AM

Great snow photos!!! I need to get all of our major January blizzard photos downloaded...... what a task, after all, it seems to snow EVERY day now!

Wonderful, happy dog photos! I'm still waiting for one, deep snow here, but I'm also willing to wait for another winter for it. I won't be upset if spring comes early.

What fun!! We got the temperature drop and wind, but no snow.

Great photos again today! You can tell that the dogs are having a blast, and you're so right, the blast of cold air doesn't seem to really bother them, does it?

Fudge is adorable (all your dogs are). Our Chows never wanted to come in when it snowed.

Looks like you guys are having FUN! Mom says those first four pics should be made into postcards or greeting cards. Too adorable!

The fiwst day looked like tons of fun, but when it get yucky and icy, it's bettew to come in and stay cozy..I did love Tsaw's westle wif that stick hehe
smoochie kisses
ASTA

Wonderful snow pic's again Sue. My goodness that is cold. Kind of reminds me of the time when we used to live in Chicago.
x

Ummmm, excuse me, but I think you have our weather and uh, we have yours. If you have zero and we have 21 degrees F, its mighty strange to me. So, uh, how do we make the switch? (Not that we really want to, but it seems a mistake has been made and in all fairness should be corrected.!)

I am relieved that Tsar got that stick under control. I had heard that there was a gang of wild sticks roaming Missouri, and was fearful that one would find its way to you. Fortunately, Tsar was on the job!

I hate that it's painfully cold, because they do look to be enjoying themselves. g

We love seeing every dog having fun in the snow! Thor looks like he is really in his element! Too bad it was so cold the next day. Maybe tomorrow will be better.

Fun snow play pictures! 0 degrees has to be better than the -16 yesterday!

Poor babies. Snow is fun but you gotta protect those feets
Benny & Lily

We just love that picture of you catching snowflakes on your tongue, Noah!
Stay safe and warm, guys. Zero is much too cold! brrrrrr

I've been reading about all the snow storms in the news, hope you are all staying nice and warm. The pictures of your cousins home are incredible!

They look like they are having fun! There poor paws, xoxo

Brrrrrr, makes me cold jsut looking at the snow. Stay in and stay warm!

If it's too cold for Tsar then it is just plain too cold.