Guess Who Came To our House

There is an alphabet written about Portuguese Water Dogs. Each letter lists several words that describe Porties and gives their definitions as they pertain to Porties.

For example under the letter A is the is the word Alpha - dubious and comical term for PWD owner. Typically a short lived expression. 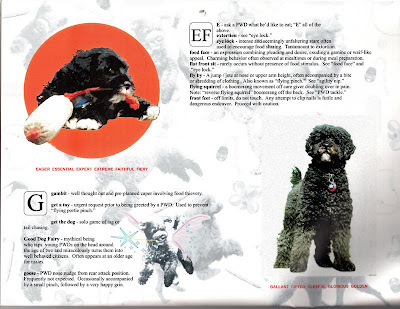 I have the entire alphabet and under the letter G is this:
Good Dog Fairy - mythical being who taps young PWDs on the head around the age of two and miraculously turns them into well behaved citizens. Often appears at an older age for males.

On Fudge's second birthday we hoped for an appearance by the Good Dog Fairy. She didn't come.  Again on his third birthday we waited up for her. She never showed.  Last year, after his fifth birthday, we decided that she was boycotting our house.

Then last night, guess who came to our house. The Good Dog Fairy came and touched Fudge on the head. He is acting like a big boy and being so good. I was resting with a migraine all day yesterday and he stayed quietly by my side. Today he's been doing everything I tell him, and he's not teasing Noah. He still spins and sings and does Fudge like things, but there's a difference. He's acting like a good boy. 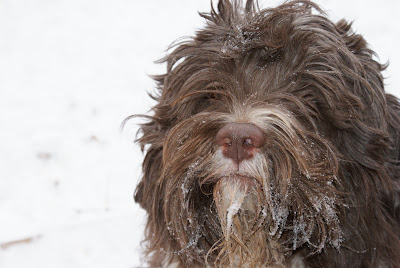 What a happy present for all of us.
Posted by Sue at 2:56 PM

How sweet! We hope the migraine is better. And TD wonders when that good fairy can be expected to tap Ciara on the head or maybe even whop her a good one:)

I remember when the Good Dog fairy visited my female PWD on her 2nd birthday. That's why we got another one 6 months later. I have a feeling that my male (15 mos old) won't get his fairy visit until he is well beyond 2 yrs old. I love him to death anyway :-)

Fudge - sometimes it just takes some dogs longer than others to grow up. I'm glad you are still very 'Fudge-like'. You keep takin' care of your momma - K? She needs you to be good. g

I am finally catching up on blogs, and LOVE all of the pics of your gang in the snow. You have so much fun at your house!

Have Samba's bloodwork results come back yet? We are all sending good vibes her way, hoping for a simple infection and not the MMM. It's a good thing you are on top of things. Lots of dog moms might have dismissed the symptoms, or been in denial, but you're a great mom to have taken action.

I hope you're feeling better, too. Migraines are no fun. None at all! Big hugs to you and your whole gang.

Aw, Fudgie! What a good boy you are! Happy 6th birthday, big guy!

Aw Fudge, that is just so sweet. You might remember though that people tend to recall the Fudge that Was, but thats OK, don't pay them any mind at all!

Whoa... I guess he just needed a Bad Sport title of some sort to have something to retire from? Sissy's been almost good the last 24 hours too, but I think it's because of the shots they both got at the vet, not the good fairy.

Oh, if Good Dog Fairy is done there can you send her over here for Franklin. Mostly for the kitties's sakes, really.

The Good Dog Fairy is a powerful fairy, it seems. Good job, Fudge!

Aww.. I bet Fudge knew you needed him to be a good boy! I hope your nasty headache is long gone!

Fudge is having too much fun to be err.. good :) But i am sure he is a good dog most of the time. Fudge will be Fudge. Comical and fun. That is why we love him most.

Hope you are feeling much better Sue.

We all need a caretaker every once in awhile, don't we? I personally think that the 4 legged ones are the best!!

I do hope you've had a good evening--Anything back on Samba yet?

We just love the Good Dog Fairy, it can be a furry good help!
We hopes the migraine is feeling better, real soon!

The Good Dog Fairy always pays a visit when the hoomans need it most, but it doesn't seem to have an effect on me. I hope the migraine got better!

that is so nice! I wonder if they have that for shih tzus....

Wow! Fudge has finally grown up!It took a while but I am sure it was worth the wait.
x

Better late than never!!! I wonder if the GDF visits scotties.

Sorry we've been absent lately. Our mom has been busy, and something she calls "over-whelmed" whatever THAT is. We missed Fudges birtday, and his big win at MangoMinster, too....Congrats! Though...now that the Fairy came, does he still count as a Bad Boy?