Later today we'll continue our Mango Minster coverage with the info on Best In Show, but this morning we have something more serious to report. 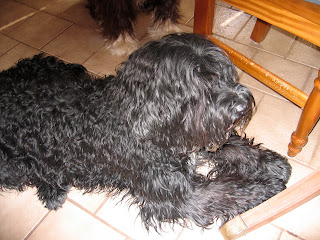 For the last few days I've noticed some troubling things going on with Samba. There was nothing major I could point to, but a feeling that something wasn't right. First I noticed that it was taking her longer to eat than normal. Usually she's the first one finished, but lately she's been one of the last.

Her right eye didn't seem to be blinking the way it should. It seemed slow to respond. The thing that bothered me most was a certain movement she made with her lower jaw. It almost looked like her teeth were chattering. At first when I noticed it, I thought it was excitement, but it's been happening more and more.

None of these things seem terribly important by themselves, but given the disease we've been dealing with, I had a nagging little voice in my head saying "Check it out". I put it off for a few days, but then decided that I'd rather have Dr B laugh at me and tell me I was seeing things, then to miss an early sign of trouble and regret it later.

This morning we paid a visit to Dr B. I felt a little silly describing the signs that were bothering me. First he looked at Samba's eyes. The left one looks pretty normal now, but the right one was doing something strange. The lower lid blinks normally, but the upper lid doesn't blink at all. The eye is moist, but we're going to start using the ointment again to keep it moist. He thinks it will come around in time.

Then Dr B examined Samba's jaw and mouth. The top jaw is doing really well, no pain and it works almost normally. The lower jaw is a different story. It's painful and the chattering is a sign of pain and weakness.

First he took blood for a CBC. We're hoping that we might be dealing with an infection and a course of antibiotics could take care of it. If her blood count is normal, then we know she's having a flare up of the MMM. For the time being we're increasing her Prednisone to get it under  control. It's not a full blown relapse because the upper jaw is still fine, but we'll have to adjust her medications and begin the decrease again. We're also looking into changing her diet, radically increasing her Omega 3s in the hopes of helping her body fight off the disease.

We knew this was a chronic disease and there might be setbacks, but so far she's responded so well that we were hoping it would continue. Aside from the paralysis, this is our first major setback and I have to admit, I 'm pretty bummed about it. I'm very glad I decided to share my concerns with Dr B. He told me to trust my instincts, that what I saw was real, and we're still ahead of the disease.

We need the Power of the Paw today. Keep Samba in your thoughts this weekend as we fight to get this awful disease under control again.

We are sending love and positive vibes your way!

We have you all in our thoughts and prayers. Nothing like a very observant Mom to notice these little changes. We hope the adjustments in the meds will help and that the tests show something not too difficult to deal with. Poor Samba has already been through so much.

Paws crossed here for you, Samba! Good thing you have a very devoted, observant mom and a great vet.

We are sending our love and our most powerful positive thoughts that Samba will soon be well. We're hoping the med adjustment and oils will help her.

With your Mom's great track record with this disease, I am astounded she waited any time at all.

Its my hope it is something easily treatable, but either way, you all have experience with MMM so down you just have to hunker down and start fighting it again.

I will keep you all in my prayers that you might get this quickly solved!

You got it! We are sending our love your way!

Ohh no poor Samba! We will all be crossing our paws that everything will be okay!

We are sending pawerful prayers your way!

Oh Sue, I am totally keeping Samba in my prayers...good for you for trusting your instincts where our babies are concerned.
Take good care and thoughts are in your behalf...

I read about your MMM post along time ago and remember a lot about it and I am sorry that Samba is showing signs of the disease returning! How awful for her! I will keep her and her family in my thoughts!

Hugs to poor Samba! You are in our thoughts.

Fur sure I am sending puppy prayers to my furiend Samba!

We all hope Samba improves. Thank goodness you are watchful.

Oh Dear. I'm so sorry. Holding you and Samba in our prayers.

Lucy's jaw chatters occassionally - I'll have to ask the vet about it. g

Our paws are crossed and we are sending you lots of AireZen, Samba!

I'm so sorry that I've not been able to visit your blog the last several days--Life has really gotten in the way. I'm just sorry to read that I've returned to Samba not being well. Please know that we'll keep her in our prayers that this passes very quickly!

Hi Samba, I saw on Team BeagleBratz blog that you aren't feeling well, and thought I'd drop by to send some Mal-Vibes and to tell you you're in my thoughts and I'm keeping my paws crossed fur you!

It's nice to meet you, although it isn't under the best circumstances.

OMD, so scary! Power of the paw comin' at you! she's so cute. you know... better to be a hypochondriate and laughed at than to miss something early that can be easily fixed.

I'm sorry to hear about this setback but it's great that you were so alert to early symptoms. I'm thinking of you all.

We're got to get in and read your blog archives. We're not familiar with Samba's medical history, but we're sure sorry to read about this flare up. We have our paws crossed, our healing vibes winging their way west, and will be saying our puppy prayers for a speedy and long lasting remission. And if there's anything mama's learned from over half a century of Great Danes [and other breeds, like us], it's to ALWAYS trust your instincts and don't take no for an answer. Hugs!

Hoping and praying for Samba! What a cutie!

We're keeping Samba in our thoughts! I'm like you and willing to take Darwin in for anything, just to be safe. She is my first dog so I'm probably just a paranoid overprotective mom, but I can't help it.
Sending big hugs and giant Dane kisses from Seattle!