My last few posts have brought in a lot of comments and emails with questions and suggestions. I feel I should answer some of the questions and give some updates. 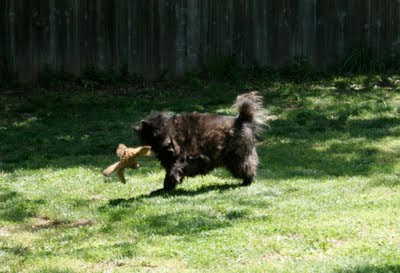 Tsar has always been a very solitary dog. He needs his space and doesn't want anyone, human or canine invading it. In the house, if another dog gets too close, he'll make high pitched squeaky sounds to let the intruder know that they're getting too close. 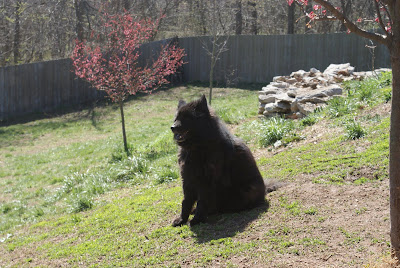 Everyone respects his need for privacy and Bailey was definitely invading it by putting Monkey next to him. He has watched Monkey before without incident, but this time I guess Bailey took him for granted. 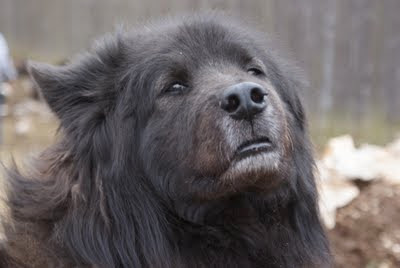 This face is unusual. Tsar has never been aggressive toward another dog or a person, but here he was letting us know that he did not appreciate Bailey and Monkey getting in his space. 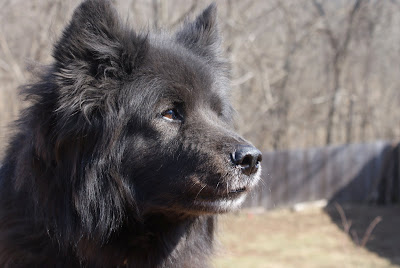 This is the happy face we're all more accustomed to. I rescued Monkey before Bailey became aware of the attack. I don't know what would have happened if she'd tried to rescue her friend. Bailey has a temper and I wanted to diffuse the situation before it got out of hand. That's my job.

Our next adventure was rolling on dead creatures, in this case a snake. 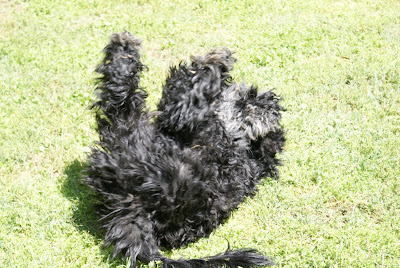 We don't know if the snake was dead when they found it, but we think it was. We don't usually see single baby snakes in the yard. Generally you find a lot of them together. This time it was a single snake so we assume a bird dropped it. It was probably already dead, but one of the dogs may have pawed at it, causing it's fatal injury.

As for the doggy perfume, that's what garden hoses are for. Everyone got a chance to get sprayed, so it was a good day for them.

Finally, Samba. This is a tough one for me. Samba is ill. Her MMM requires that she take prednisone for the rest of her life. The common dosage of pred is 5mg, but Samba is taking 20mg and that's down from 60mg originally. Any dog on 5mg shows an increased desire for food and water, but Samba's hunger is off the charts. I don't want her gaining a lot of weight, so she has to remain hungry most of the time. It's hard for both of us. 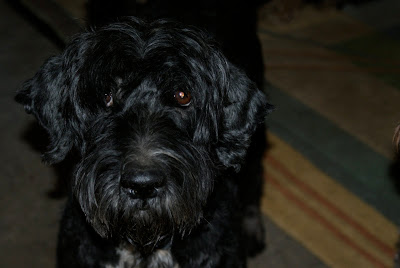 Several readers have asked why I don't just crate her when I have to leave the house. It's a great question. Fudge was the first dog I ever crate trained. I taught the pups to go into their crates because with eight of them I needed to confine them on occasion. Morgan, Tsar and Samba have never been crated.

Because of her illness, trying to start crating her now would be way too stressful. The steroids have made her anxious and she overreacts to situations that she would at one time have accepted. I need to find creative ways to deal with her problems. Keeping food out of reach is one way to help her. I've also started giving her a small snack before I leave her. That seems to have helped.

All Porties are vocal, but Samba is especially so. She talks to me all the time, so answering back when I reprimanded her isn't unusual. We have conversations and although there is a language barrier, it's pretty amazing how well we can understand each other. 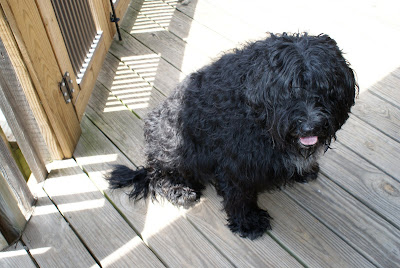 I know that I won't have Samba with me as long as I'd like. Her illness has made her frail and she hasn't recovered from the recent flare up as well as I would have liked. She's nervous, has a tremor and just isn't the strong robust dog she once was. Our time together is limited and I intend to make it as full and happy as I possibly can.  I won't get upset over a damaged plant or stolen dog treats. We have more important things to concentrate on, like frisbee games, swimming at the lake, snuggling together on the sofa and sitting together on the deck. Building memories together.

Happy Mother's Day to those of you with two or four footed children.
Posted by Sue at 1:13 PM

Thank you for that post, Sue. And a happy Mothers Day to you and to Samba.

Gretchen says sometimes we all get caught up in the moment, and she's sure Bailey didn't mean to disrespect Tsar's space. Pretty insightful for a wee one I accuse of having no boundaries... ;)

Great post. Tsar and Phantom are a lot the same. Phantom is basically a loner, but as he is aging, it seems he doesn't mind the closeness that Ciara insists on. She has a way of getting what she wants:)

We are in total agreement with your methods with Samba. You are finding a happy medium between keeping her healthy and keeping her happy. Kudos to you for that. You are a great Mom.

Well said! Samba reminds us so much of our friend, Sunshade. She's hungry all the time too but the girls have very different medical issues. We want you to be a happy girl and live forevery, Samba!
Happy mother's day, Sue!

Happy Mother's Day to ou, Sue. Hugs and kisses to the pack!!

We're with you! Bella and Kendra have only just been crated at night because of the pooing. Otherwise they're free range. Dogs damage things at times....and they're just things. Annoying, but the dog is more important.

Daisy is our talker, and lets everyone know if standards have slipped.

We thought the Monkey attack was funny.

Very good letter, Sue. We have talked about these things but not all at the same time and your letter made them clearer.

You ARE a great Mom to your pack!

What a lovely post. I'm sure nobody was judging you - just commenting on the photos and text. You write a lovely blog with photos to demonstrate any situation. Thank you. Happy Mother's Day. Enjoy every moment with Samba - I know you will. g

I wouldn't really mind broken plants and stolen food with an old friend or furry too... She has given the better years of her life with you... its wonderful that you are still making sweet memories with her.

Happy Mother's Day to you Sue. Hope you have had a great one with your furries.

This was such an interesting post. Now we must make mommy go back and read some of your previous ones! Hope you had a great Mother's Day!
Smooches from pooches,
BabyRD & Hootie

I do love reading all your posts (as you know by now),and this one was no exception. You are the very BEST mom to your babes and they are so lucky to have a mom like you (and not to forget their dad either!)

Great post and great insight! All dogs have their own personalities and quirks....... :)

Tsar's just doing what he does. Sometimes a guy just has to defend his territory, even if it is from his friend's toy.

I think of Samba often, and understand exactly why you give her leeway that the others wouldn't get. You really do need to enjoy all the time you have with her, as long as she's safe and healthy. And, for the record, I don't fuss over dirt and such. That's why Herbert Hoover invented the vacuum cleaner (or so one of my sons said way back when he was in 3rd grade). Life is short, and the dust and fingerprints or pawprints will continue on!

Hi Sue. I was thinking about Samba and her need for extra chew stuff. I've been taking Bart to the "holistic" vet for acupuncture... Anyway, they have some "healthy" treats there, one of which is called "Big Boyz Sweet Potato Dog Chews." They are BIG rounds of dried sweet potato. The good news is that they take even the rotties a while to polish one off. If you're interested, or can't find them near you I'd be happy to pick up a bag for you... Just a thought.

A belated Happy Mother's Day to you!!

I totally agree with your methods of taking care of Samba. She's lucky to have you for a Mom.

I'm so sorry you have to deal with Samba's illness. Wishing you many happy days with her. Happy belated Mothers Day!