Yesterday we went to an agility trial hosted by our dog training club. Our friend Dr Nicki was running two of her dogs. I have some pictures, but I'll post them later.

As most of you probably know Joplin, Missouri was hit by a tornado last evening. Joplin is about an hour southwest of us here in Springfield. 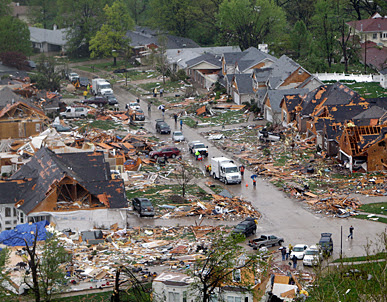 Reports say the tornado was about 3/4 of a mile wide and destroyed about 30% of the city. 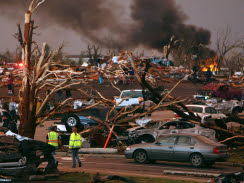 So far there are 89 confirmed dead, though that figure will undoubtedly go higher. 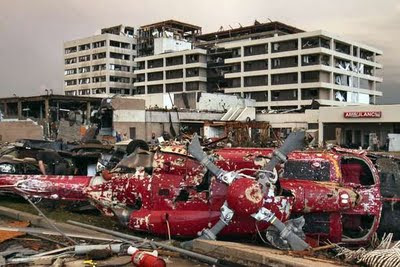 The hospital was hit and this helicopter was destroyed. 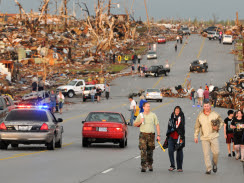 Although emergency workers from here are in Joplin helping, everyone else is being told to stay away. 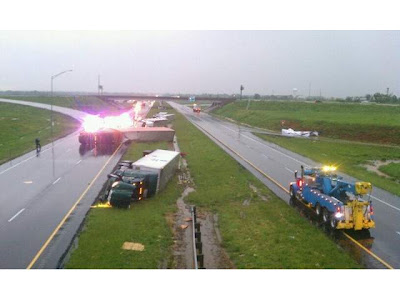 Highways are closed because of debris.

There is debris falling all over the area. Homes near us have reported medical files and xrays landing in their yards. So far, we've had none.

Last evening we had high winds, rain and thunder and lightening.It calmed down and was quiet overnight. Today, it's very dark, as if it were late night, and we've had a number of thunderstorms go thru. The wind picks up and a storm comes with thunder and rain, then it calms for a while, then the next wave starts.

As you can imagine, I'm trying to get dogs out and back in during the lulls. Morgan has been hiding all day and Noah sits by the door barking at the thunder.  The others just follow me around and have trouble settling down. It's going to be a rough few days as this is forecast to go on until Thursday.

Sending lots of good vibes your way. Tornados freak me out as much as fire. Hugs to all... and may peace be found in Joplin.

We hope the darkness only brings rain and t-storms with none of the devastation. Paws crossed for you for the rest of this crazy season. The Momster is worried here too.

Paws crossed that there are no more tornados for any of us. Gretchen did really well last night with the thunder. She sat up, I told her it was okay, then she relaxed and went back to sleep.

I hope none of it comes your way. Be safe.

As we watched that on the morning news, it made us so very aware of how fragile life really is. Hope those tornadoes stay away from you.

Thor tries to hide under people's feet and chairs during thunder storms. I can't imagine having 10 of them bothered by the weather. Paws crossed for all of you.

Paws crossed and prayers going up that the rest of the forecast is just rain for you and no more horrific weather. We're so thankful you were all safe last night.

Stay safe. We've been watching the coverage on the news this morning.

We saw the rescue dogs being brought in.

Stay safe. Our paws are crossed...

Our hearts go out to those poor people. It is unimaginable. Hope that you and your crew just get a little wet and nothing more.

You are in our thoughts! Stay safe!

I thought about you with these storms, and have seen the devastation on the news. It's very sad, and we keep them all in our prayers and you as well that all continue to be safe!! Take care!!

I'm very glad you were an hour away! I'm also very, very glad my eldest son, who works in Joplin and was there at the time....and my in-laws who live mere minutes from Joplin...were all safe. Enough already with the tornados this year!

Our thoughts and prayers go out to all the victims, their friends and families.

Did you take the pictures? They are awesome and really capture the destruction and heartbreak, really good photos!
- Rei G

Happy to hear that you and the Porties are safe and well! What terriying pictures!

We have been having rain and thunder boomers, today was as odd a day as I can imagine. Started out Sunny, the turned very dark for a while, then back to sunny. This continued all day long, but no bad stuff.

We are thinking of you!

Paws crossed for all of you. Stay safe.

This is just so sad. Our thoughts and prayers go out to the people of Joplin.
Stay safe, guys.

We're holding all of MO close to our ♥s in prayer. So happy to know that you and yours are doing OK.

The devastation is unreal... I can't imagine.