Humans are so predictable, we complain in the winter that it's too cold, then summer comes and it's too hot. In the spring we had weeks of rain and complained about it. Now it's dry and we're complaining that we need rain. We're just never satisfied. 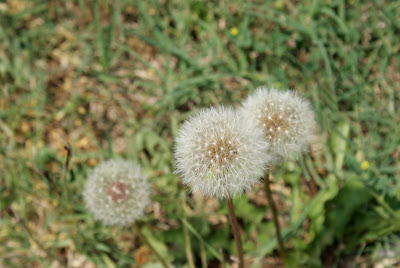 Dogs, on the other hand just take whatever weather comes along and make the best of it. Sure, some dogs are afraid of thunder and go a little crazy and in the very hot weather my dogs don't want to spend as much time outside as they do on cooler days, but overall they enjoy going out to play in all sorts of weather conditions. 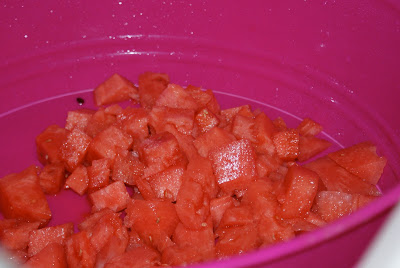 Since it's been unseasonably warm lately, we decided to surprise them with one of their favorite treats, icy cold watermelon. 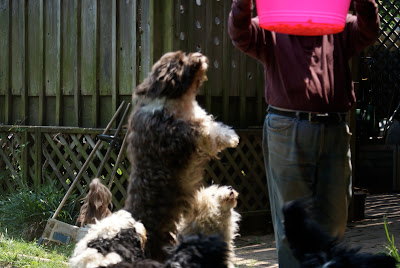 This seemed to be a very popular decision, but I had forgotten a very important fact. 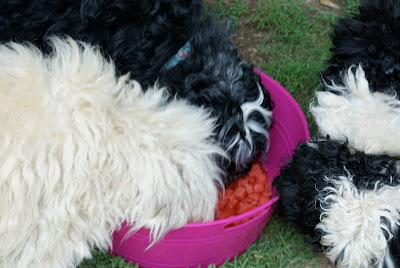 Samba believes that she's starving, so seeing a large tub of watermelon was too much for her and she jumped into the tub and stood in the watermelon, gobbling it as fast as she could swallow. I had to lift her out of the tub and put her in the house while the others shared nicely. 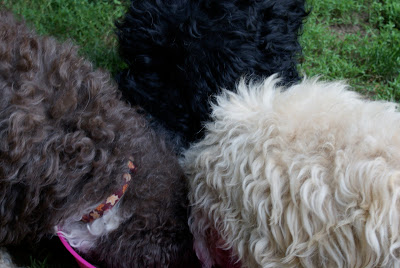 We divided the pack into two groups because only four or five heads fit in the tub  together. This group of Morgan, Sky, Fudge, Noah and Tsar did well once Samba was removed. 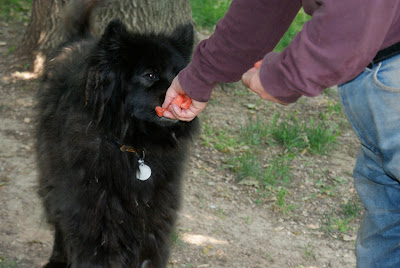 Tsar, of course, is far too dignified to stick his head in a tub of watermelon with all those other dogs, so he took his share from Rob by hand. 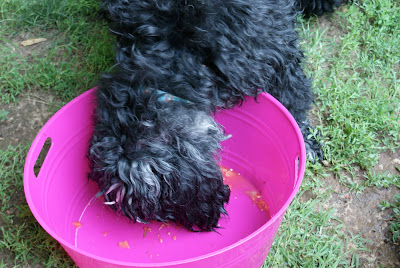 Sky was cleaning up the last few pieces. 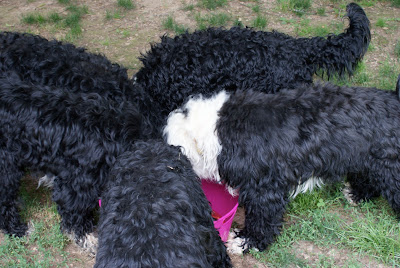 Then it was the turn of the next group, Tess, Lola, Bailey, Norma Jean and Noah. Yes, Noah got in on both groups. 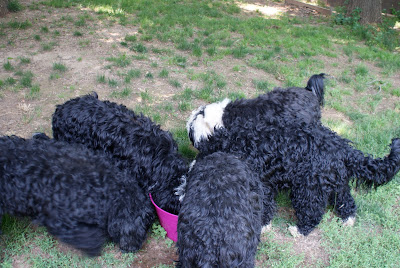 Cold watermelon on a hot day is just the best. 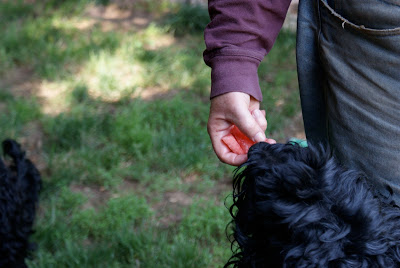 Getting all five heads in the tub at once isn't easy, so Rob handed out some extra pieces. 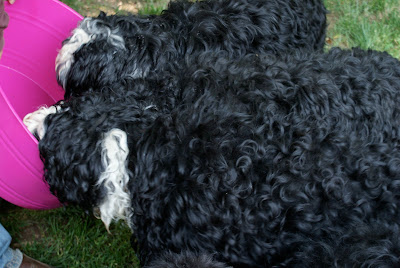 It was good right down to the very last piece.
Posted by Sue at 1:12 PM

What a great treat on a hot day!!! If Phantom would eat watermelon, we just know he would do the same as Tsar:) TD and Ciara LOVE watermelon.

Have a great weekend.

What a great idea I would never have thought of. My dogs thank you.

Sounds refreshing! We fed Oscar watermelon for the first time last week - he loved it!

That looks nice and tasty!!! Humans are very predictable....everyone including myself complains about the weather...too hot, too cold, too rainy, too dry, too windy, too humid and the list goes on. Dogs just seem happy with everything. We need to follow the road they are on!! Lots of love, Debbie & Holly

I'm afraid there might have been a bit of snarling around here. We take food very seriously.

Looks like everyone enjoyed that lovely treat. We had our first watermelon yesterday, and it didn't last long!

The watewmelon looks fantastic and I will be sending Mom to the stowe!

I forgot to tell you we tried this the other night. Sissy said "Brain freeze!" and backed off. Gretchen went gobble-slurp-gone, Samba-style.

You and Rob are so good to your pups!

Me, I don't care much for watermelly, but I am glad your dogs do. Do you plant your own?

YUM!! We've gotta give that a try!

We do the same thing with ice cubes, but I think watermelon would really be a bigger hit!!

I hope you're all staying cool and having a good weekend!!

You have us drooling! Watermelon is the perfect treat for a hot day! yummmmmmm

Gosh, I can't even be sure how many doggies I see around the Wally Melon bowl. Just a mass of curly fur.

I heard recently from a Chinese Medicine practitioner that watermelon, being red, is considered a high-value food for humans, so I see that it might be good also for dogs. I've never fed it to Penny, but I think I'll try it next summer - winter here at the moment - do you take the seeds out? I thought it looked as if you had done so.

Look at those yummies and all the fun!

woah! A giant tub of watermelon! What a great treat!