People who say animals have no feelings annoy me. They more than annoy me, I think they have no brains. I'd like to take a few of them and lock them in a small room with a grieving Cockatiel that has just lost her best bird friend and make them listen to her mournful screeching for hours on end. 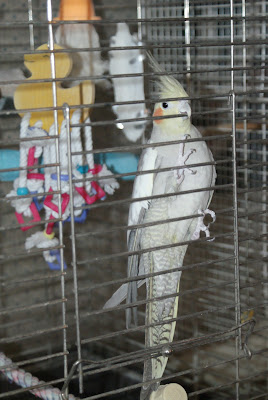 Holly continued to scream Thursday afternoon after seeing Cloud die. Finally I covered her and she quieted, but not before getting Samba very upset. Samba paced and whimpered and even peed on the carpet. It was much harder to calm her.

Rob and I discussed what our next move should be. We were concerned that when we uncovered Holly in the morning, she'd start screaming again when her friend wasn't in the cage next door to hers. Finally around 7 PM we drove to the pet shop. 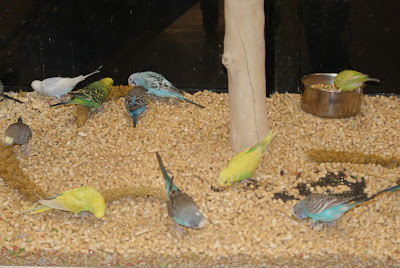 Holly is too old now to put a young bird in with her, so we decided to get her a new parakeet friend and hope that they could bond. When we uncovered her cage Friday morning she immediately went over and looked at the floor of the cage where she'd last seen Cloud. Instead she saw the Blues Brothers. 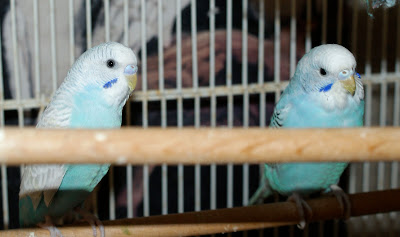 All day Holly sat in the corner of her cage all puffed up. She refused to eat and didn't make a sound. I was getting concerned about her, but at bedtime she finally said 'hello' to me and I knew we were past the crisis. This morning she again hurried over and looked to where she'd last seen Cloud, but now she's starting to show some interest in the new birds. They're young and active and noisy and I'm sure they'll keep her entertained. Any ideas on names?
Posted by Sue at 11:51 AM

Those two-leggers more than annoys us too!! I'm so sad for Holly but I do hope she quickly grows to enjoy her new friends! How is Samba now that Holly is a little calmer?

awww poor Holly. How can animals not have feelings? I always think about a documentary about elephants I watched and when one of their herd dies, they all mourn for it. so sad.
No name ideas, but they are really cute!

What about Jake and Elwood? I hope your pretty bird settles down with her new friends, soon...

We feel so horrible for poor Holly. We hope the new Blues Brothers make her feel better.

Jake and Elwood is just too obvious, isn't it? They're really cute.

Shannon has had parakeets, always 2 and for a time she had 3. She always gets a new friend for the survivor when one dies. Currently she has a yellow parakeet who's sort of cranky, and a white one who is blind in one eye and, um, intellectually challenged. He's very happy all the time, and the cranky one sometimes scolds him for being too happy. I think the Blues Brothers will help poor little Holly.

I'm so sorry to hear about Cloud.

People that think animals have no feelings know nothing about animals!!

I think Dancer and Prancer would be good names for the Blues Brothers -they just look so carefree!!

Have a great weekend.

Wow! They are beautiful!

Of course animals have feelings. Poor Holly. I hope she'll come to like Aqua and Cyan. (Okay, I really do like Jake & Elwood better, John & Dan, Belushi & Aykroyd...)

Hello Everybuddy, we are glad poor Holly is feeling a little better. Birds are just as affectionate as any other animal and grieve too. We send Holly gentle puppy hugs and a little healing slobber from Rory.

We love your two new friends. We think they should be called Bluey and Curly. Hope all is well soon. No worries (especially for Holly) and love, Stella and Rory

Poor Holly. Hope the new boys help her over her grief.

We sometimes see flocks of cockatiels and parakeets (called budgerigars here) in the wild.

The Blues Brothers are beautiful. We hope Holly had a good day today. We aren't very good at names ( hence, Lightning). But Jake and Elwood seem like the natural choice.

I'm so sorry about the loss of Cloud. I remember several years ago when my Mom's cockatiel lost her companion and went through the same thing. It was heartbreaking to hear, but a broken heart does mend...eventually. I'm glad you found new neighbors for Holly.

Oh I hope you were able to calm Samba. Of course animals have feelings. Still feel horrible for Holly - and how about going with the Blue Brothers - Jake and Elwood? g

They are very pretty and remind me of a pair my mother had years ago.

I hate to say it but I like Jake and Elwood too!

Birds do TOO have feelings. We like Jake and Elwood too! Hope poor Holly feels better soon.
xoxo Chloe and LadyBug

Poor Holly, I hope her new neighbors will help ease her pain. I like Jake and Elwood..more creative than the names of the birds I had years ago, they were Pete and Repeat.