It's a new month and a new season and it's time to get started on new projects. First I thought I'd catch you up on some things I left hanging. 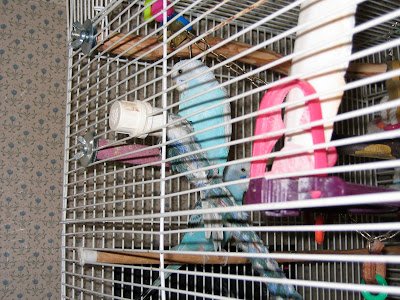 First, the Blues Brothers are settling in well. They eat a lot and play with the cage toys and make a lot of noise. As soon as I started calling them that, the names were obvious. The darker, noisier one, in the back, is Elwood and the lighter quieter one is Jake. They just polished off a bowl of diced apple, pumpkin and banana without throwing it to the dogs. 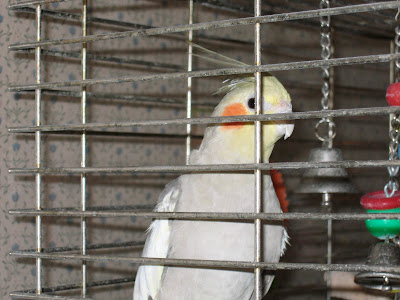 Holly is doing much better. She's come out of the corner, is eating and spends most of her time watching and hissing at the new noisy neighbors. 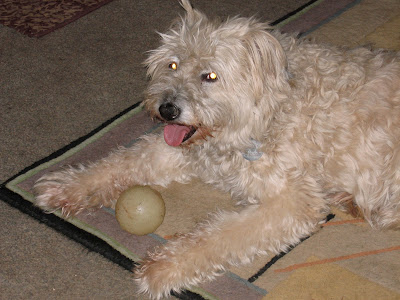 Morgan is just the sweetest little dog. Today she brought her ball to me and stood wagging her tail. How do I explain that it's going to be a long time till we can play ball again? Her leg seems to be healing pretty well. I've been able to cut back on her pain meds and she's walking now putting a little weight on the injured leg. She hates being carried and tries to beat me to the steps, but so far I've been able to grab her and lift her up the stairs.

Dr B thinks she's on schedule and this weekend we can start her physical therapy which consists of walking up and down the hill on leash. Going down is no problem, but walking uphill forces her to stretch out the muscles and work the leg a little.

Finally, my girl Samba. The MMM is currently under control and we've cut her prednisone back to a maintenance dose. She's using her jaw almost normally.

We've been unable to get rid of the kidney infection. I was given an option of using an injectable drug that would probably wipe out the infection, but I couldn't accept the side effects which include possible kidney damage and deafness. For now we'll continue to test regularly and possibly repeat the antibiotics.

As if all that wasn't enough, I discovered a large swelling on the tip of Samba's tail. At first I thought it might be a spider bite, but it didn't go away. I took her by the clinic and one of the techs thought the tail was fractured, but Dr B says it's scar tissue from an injury. Samba loves to bang her tail against doors and furniture and anything that makes a loud noise. Over the past few days the swelling seems to have come down a little and we're left with a crooked tail with a bump in it. We can live with that. As you can see in the short video above, Samba never stops wagging that tail.

So, on to a new month and we're going to try not to get any new injuries or illnesses.
Posted by Sue at 5:37 PM

jake and elwood rock...I know I was jake for halloween once many many years ago.
glad all is well in your house this week.

We hope this month treats you much better - after all, it is the month for Thanksgiving:)

Glad to hear all the birds are doing well, especially Holly. Good news on Samba, except for the tail and the kidney infection. Hope it doesn't get any worse and miraculously cures itself.

Now take a deep breath and enjoy this month:)

I'm glad the Blues Brothers are adjusting and Holly isn't so sad. It's hard to be inactive, isn't it Morgan? Sending good vibes Samba's way, and yours.

Gosh, it's always something...
Hope the next few months are carefree for you and your pack.

Thats nice, everybody is doing quite well, including Jake and Elwood. You have provided me with some funny memories (re the Budgies) that my Mom used to have.
Some other dog on this list used to pound her tail until she was injured. . .was that Lorenza?

Cheers and hugs all around,
Jo, Stella and Zkhat who would love a blues brother to play with!

Mama is falling down on the job again, so we're just catching up with all your news. We're so sorry to read about Cloud passing; do birds fly over the Rainbow Bridge? We choose to think so. We're so sorry for Holly's grief, and hope the Blues Brothers will give her some companionship and comfort. Do parakeets and cockatoos co-exist in the wild?

Glad Morgan is feeling better; hope the rehab goes well. And glad Samba is feeling better. Is there any way to culture the kidney infection to find the optimum antibiotic? We wonder because Jed's terrible leg infection turned out to be resistant to the newer, broader spectrum antibiotics he was on for 3 months and we didn't find out until a culture showed an older antibiotic was the only one that was effective against his 3 strains; it took 2 courses over 6 weeks, but using the correct antibiotic is what finally cleared the infection so his leg could start to heal. And Samba, stop banging your tail! That's a common problem with Danes and can lead to amputation if the damage is severe.

Glad to hear Jake and Elwood have settled in well. Hope all the other injuries/sickies get better real soon. Take care all. No worries, and love, Stella and Rory

Elwood and Jake are cute names!
We hope November is the perfect month for all of you!

so glad your pack is healing, healthy and otherwise doing well.

I found out last week at the twin physical - that Lucy is perfect (of course!) but my boy has some issues and I'm having a hard time. :) Take care of you. g

It will be a much better month
Benny & Lily

I'm glad that Jake and Elwood are settling in (and glad those names stuck, because that was what immediately occurred to me when you dubbed them The Blues Brothers).

Can you gently roll the ball to Morgan, so she thinks she's playing without actually racing around? The poor little girl looks so hopeful.

Hope this is a healthy month for all of you!