It's been six weeks since Morgan tore the ligaments in her knee. We've tried to keep her very quiet during that time and we carry her up steps. She's had a reduction in her food to try to drop a few pounds. A lighter body means less stress on the joints.  She's been doing well and I've been able to cut her pain medication in half.

Yesterday I took her to the clinic to have Dr B assess her progress. He was pleased with what he saw. She's putting about 75% of her weight on her leg again when she walks. He examined her and when he stretched out her leg then bent it, I winced, but Morgan showed no overt signs of pain. 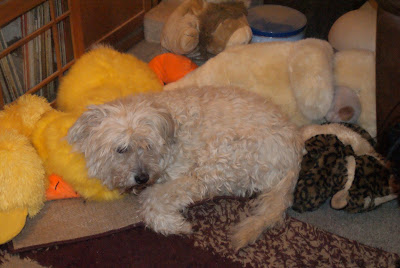 We'll be starting therapy now and she'll only take pain medication at night to ease her sleep. As I've stated many times, Morgan is a tough little girl. Here she is resting among her stuffed animal friends.
Posted by Sue at 5:34 PM

Oh that all sounds good!

Stop on by for a visit!
Kari
dogisgodinreverse.com/

Oh Morgan we didn't know about your poor knee. We are glad all is going so well for you. Take care sweetie. No worries, and love, Stella and Rory

oh Morgan, I hope he's doing great even he had a hard time, but we're praying for his recovery! Your very lucky morgan, your mom was very caring!

Wonderful news. And yes, she is a good fighter, but she has a great nurse too:)

yea Morgan! I know PT will be hard work, but Mom will make it as easy as she can. g

Good for you Morgan. PT can be very exhausting...so we are wishing you luck and hope you are pain free very soon!! xoxo Chloe and LadyBug

Good news! Morgan, you'll be back with the pack very soon.

What great news to wake up to! We are so happy for you, Morgan!

Hooray Morgan!! Keep being a good girl and don't rush too quickly back to full-speed.

Glad to hear things are doing good; best of luck to Morgan with her therapy!

Keep up the good work, Morgan. I think you will enjoy therapy... lots of touching and attention and maybe even some (low fat) noms.

Glad to hear that Morgan is on the mend. I can't wait to hear about her Physical Therapy.. bet it will help tons.

She looks just like a stuffed animal! Great news on the injury front

We're so happy Morgan is doing so well! Good luck with that therapy stuff, Morgan. What a lot of stuffies you have!

Great to hear this Sue.
Weight can be the means of a slippery slope for so many doggie ills... KEEP IT UP MORGAN, well done mum :-) X X X