Too Good To Believe

Today was an important vet visit. The three oldest dogs, Morgan, Tsar and Samba get a check up and bloodwork every six months to stay on top of all health issues. Lately we've had some serious problems and I was anxious about today's visit. 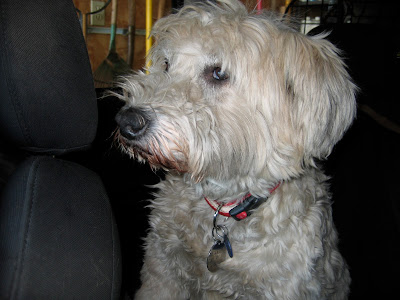 I woke myself at 4AM to give Samba her thyroid tablet. She was having a thyroid test done this morning and needs to have taken the pill 4 to 5 hours prior to having her blood drawn. I slept badly the rest of the night and was up at first light to get urine samples from all three. They all cooperated nicely and we arrived at the clinic for our appointment in pretty good spirits. 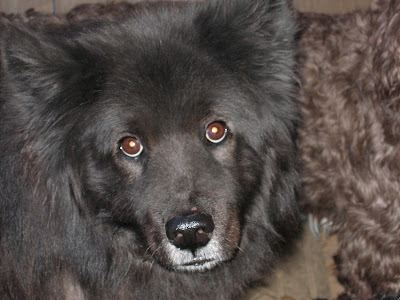 Tsar went first. His checkup was great, he stood still for the blood draw and Dr B was very pleased with him. His weight is good and all systems seemed to be working well. We've been treating his arthritis for six months now and he's like a new dog. The first thing I noticed a few months ago was that he lifts his leg again to pee. He also does a playbow and he and Fudge run around the yard together playing almost every day. He comes when I call him, often running to me and he's even eating more regularly I guess he just feels better, period. His urinalysis was perfect and we'll have his lab results back tomorrow. 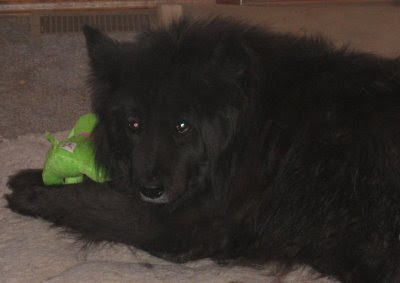 Morgan is using her leg about 80% of the time and sometimes her limp is barely noticeable. Her eyes are a little worse than last time, but don't seem to be bothering her.  Her urinalysis was the same as last time which was good and the only new problem was some pain in her wrist from arthritis. Dr B was pleased with her progress, but she's gained two pounds from inactivity during her knee recovery. She'll be dieting for  a while starting tonight. 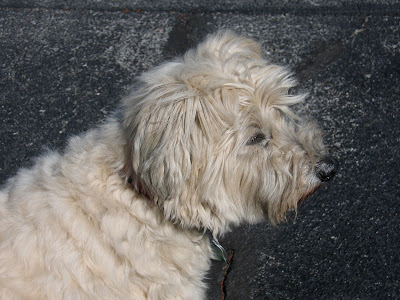 Then it was Samba's turn. Samba had been busy getting into things in the office while waiting. At one point she stepped on the pedal that controls the table and Morgan started dropping fast. Dr B and I both grabbed Morgan while our tech, Melissa, grabbed Samba. She had been trying to reach the treats by herself. 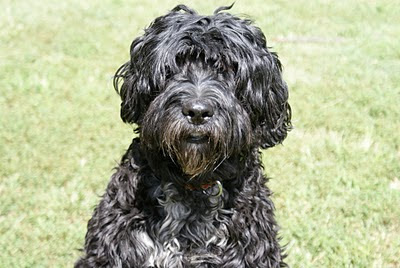 Samba has a lot going on, but we were amazed at what's happening. She's getting new muscle in the head area where the MMM destroyed her jaw muscle. The other muscles are bigger and stronger and although she's head-shy and  won't let us open her mouth, she can open it quite wide by herself as she demonstrated. Her eyes, though a little slow, have good blink reflexes.

She has injured her foot and cried out when it was examined. We'll watch it and maybe do an x-ray if it doesn't improve by itself. Her injured tail has improved. The inflammation is gone, but she has lost some of the movement in the very end of the tail. 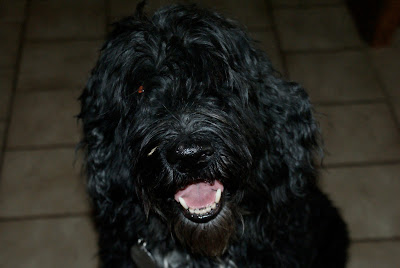 Then we checked the  urinalysis. We've been trying for months to get a kidney infection under control and although the antibiotics have helped, they haven't killed the infection completely. Last month Dr B and I discussed the option of injections of a strong antibiotic that could kill the infection, but could have very severe side effects. I decided not to use it. Today the test showed that there is no longer blood in her urine. Her body is fighting it off. Her poor damaged immune system is trying to kill the infection and is succeeding. Dr B and I were both jubilant. We'll repeat the test in a month to be sure it's still improving.

This was a most wonderful vet visit. We'll have the blood results on everyone back tomorrow and that will tell us if anything else is going on, but for today, I'm doing a happy dance.
Posted by Sue at 3:27 PM

Our paws are crossed every buddy's blood is good
Benny & Lily

Fabulous news all around! I laughed out loud at the thought of Samba lowering the table while Morgan was on it! I'm so happy the kids are doing well.

We cheered Samba's antics, I'm afraid. A curious, albeit naughty dog is ALWAYS a good sign we say. ;)

Glad to hear the good reports all around!

Happy dance on your behalf! Good news for all 3! Samba's antics were pretty funny.

What great news!
Bummer about the diet, Morgan.

How wonderful. Paws crossed that the blood results are all good too.

Hurray! I am doing the yorkie happy dance. Hope the blood work results are perfect!

So far, so good, hope the rest of the results are good for all. You are a wonderful caregiver.

Happy Dance, Happy Dance! It's always great when their labs come back perfect - isn't it? Hope you had a lovely holiday and are doing well. g

Hi Everybuddy we are glad you are all going ok and the vet visit went well. Sorry about the diet. Take care all. No worries, and love, Stella and Rory

Yay, Samba! She's a gal after our own hearts. After all, the Lord helps those who help themselves. We're big on self-help when it comes to treats.

Glad for all the positive reports. Paws crossed that which needs improving continues to improve.

Three cheers for Morgan , Samba and my BFF, Tsar! And a special cheer for their Mom Sue who takes such wonderful care of her pack.

May everything stay well and healthy and the rest of the pack do well too.

What a wonderful for all three oldies!!!!

Good for Samba for misbehaving!!! Sometimes you have to serve yourself if others are too slow.

This brought immediate tears to my eyes! What a thrilling visit and you can both have a cheery pat on the back for all your wonderful care and attention of your family. How do you put Morgan on a diet when everyone is getting treats? That must be so hard. Pop over to my etsy shop Sue, to see some reduced prices till the end of 2011.

Well done. GOLD STARS GUYS... GOLD STARS ALL AROUND, one for mom too for being such a star at looking after you all.
:-) X X X

Oh that is just wonderful all the way around!

We will join you all for the Happy Dance!!! Yay!!! xoxo Chloe and LadyBug

You are very brave to take 3 at a time to the vet. So far the most we have take is 2. Sounds like a good check up so far. wishing good news on the rest of the tests.
Ernie still taking it easy. Thought he was doing better and then Emma one of our fosters wanted to play and there he went!!! Thought he was feeling better -- then he started limping again. Nest step probably xrays and hopefully no surgery needed
Mom Barb of the pack.