Last night I was looking at some photos of the pups the day Rob brought them home. 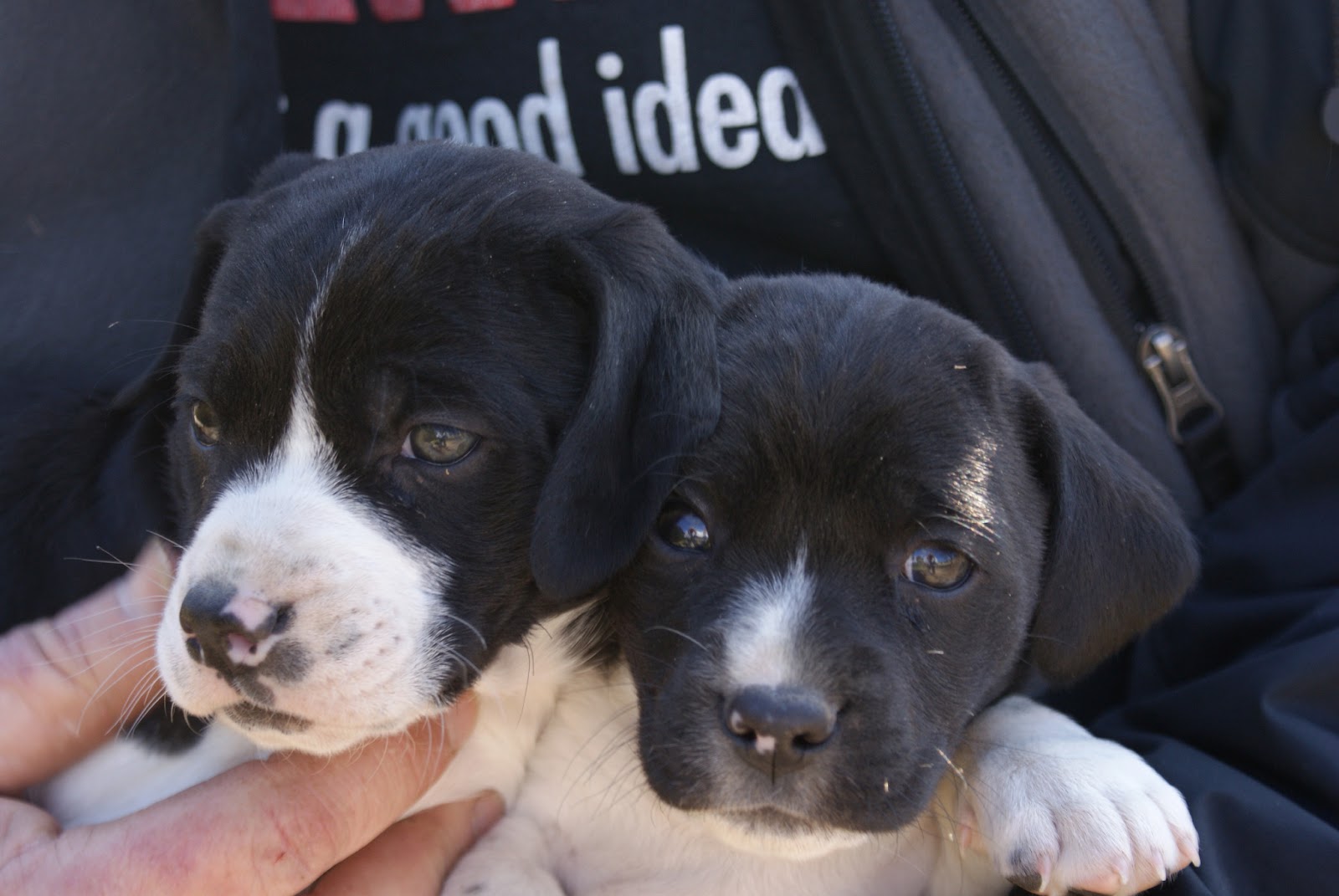 They were so small and plump with short little legs. 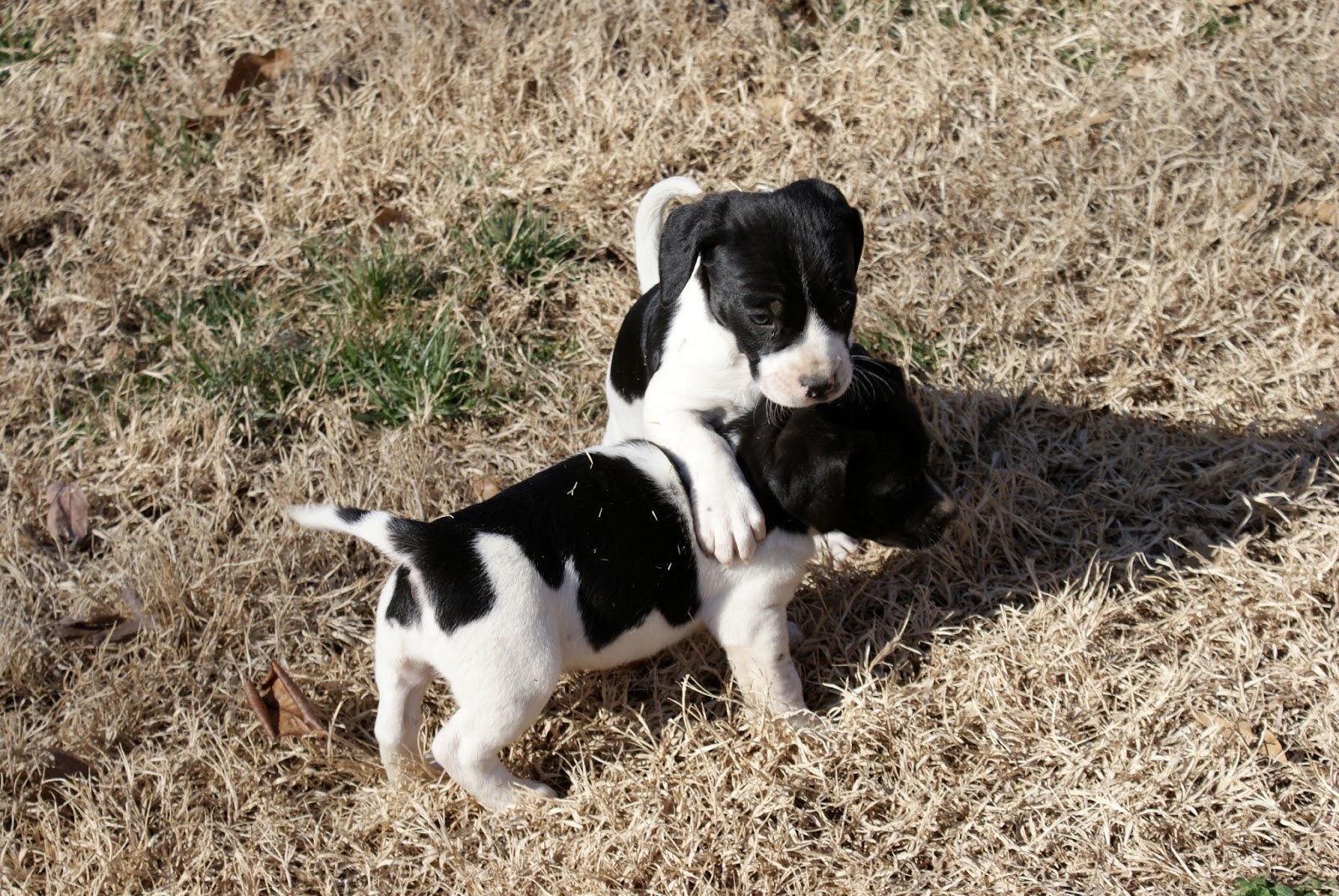 They're still small dogs and probably will stay that way, but they've grown and changed a lot. Now they look like small dogs, not young puppies. But their favorite activity is still wrestling. 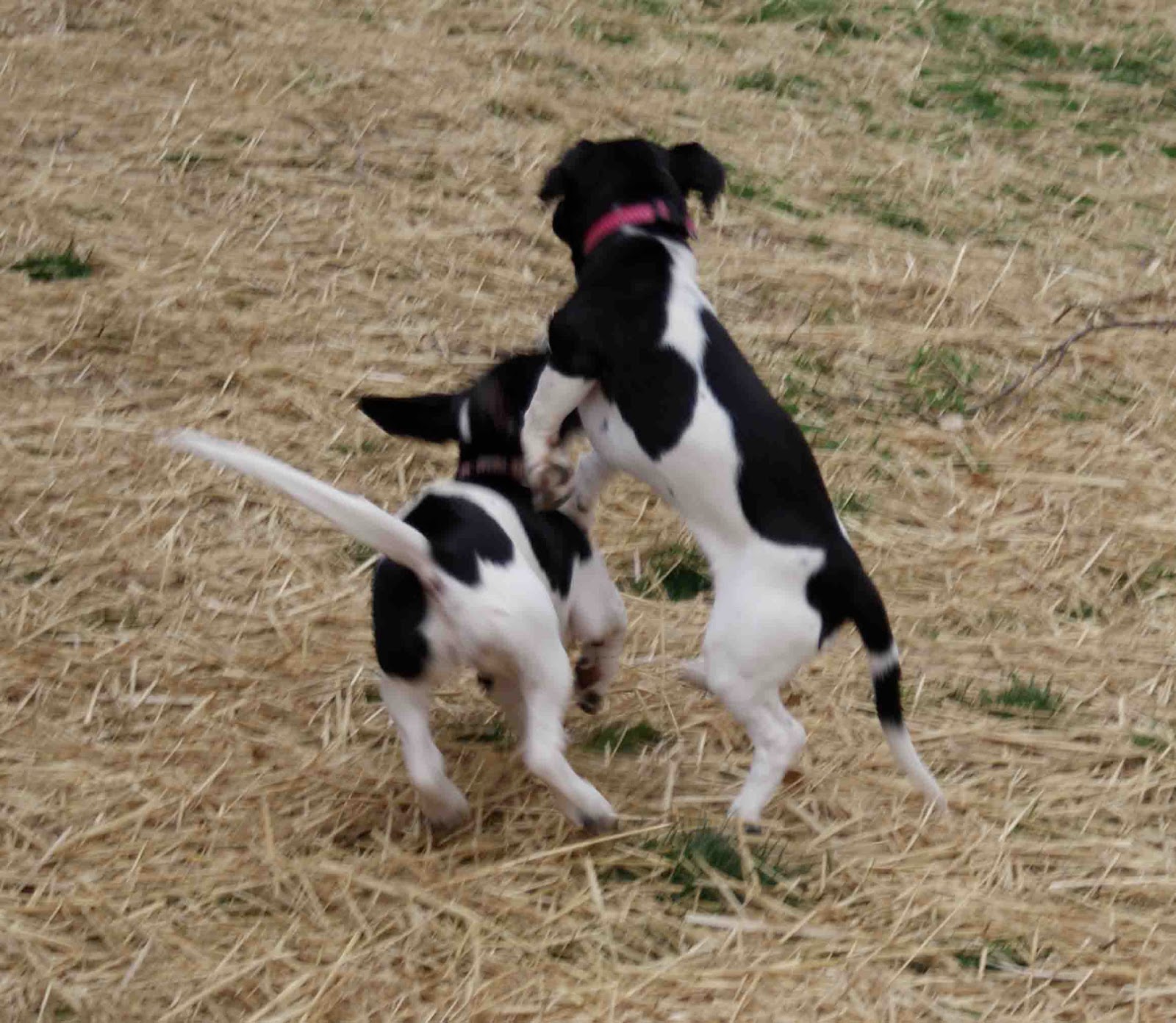 Sydney is the larger and calmer dog. She's longer and taller than Mackenzie and outweighs her by three pounds. She's an easier dog than Mac. She loves attention and tries to please. I'm her chosen person and I think we'll make a good team. 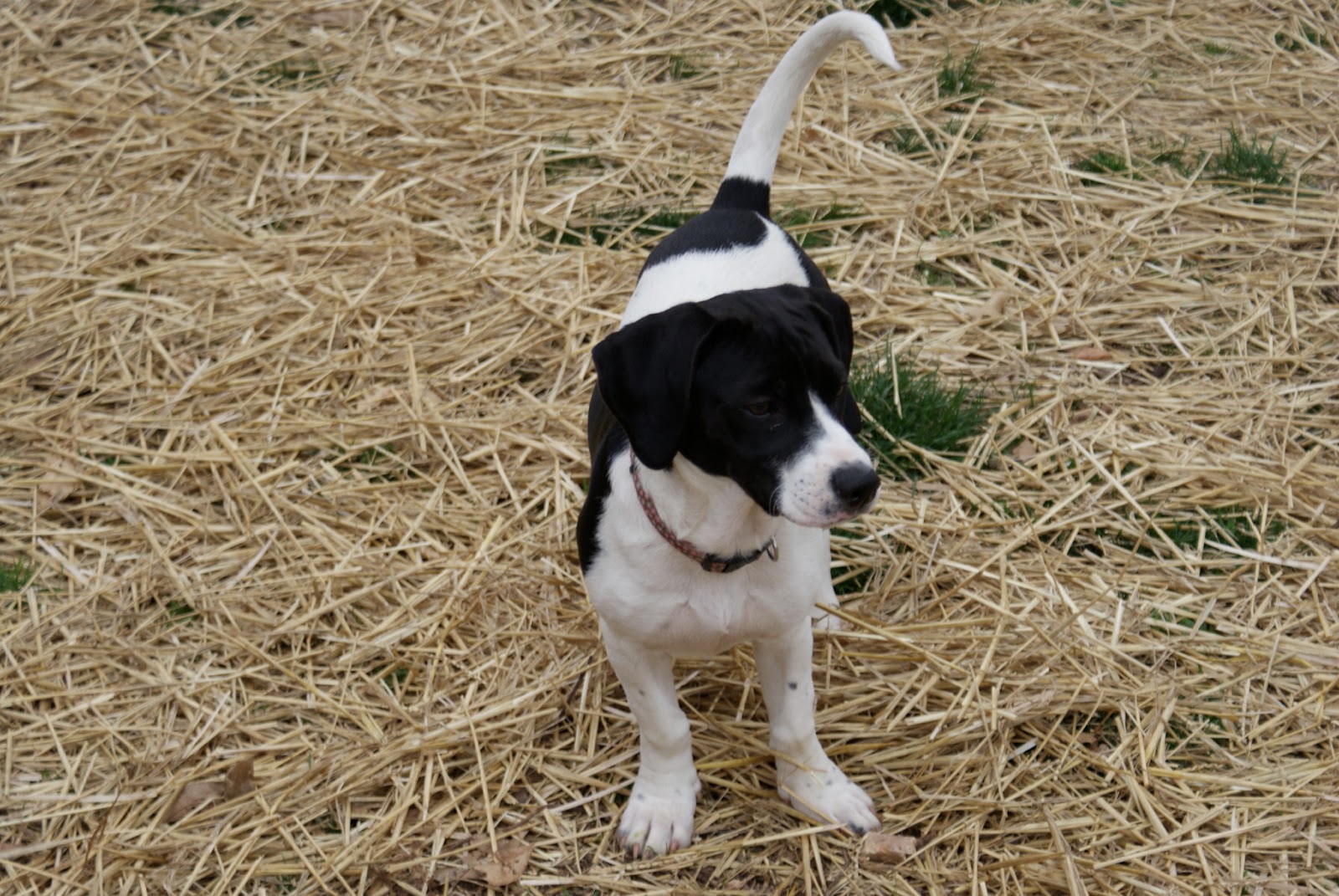 Mackenzie, on the other hand, gets lots of attention, but it's not always of the positive kind. Mac likes to investigate everything and is usually in trouble. She does not like to cuddle or even to be held. She wants her freedom, but doesn't use it wisely. She's often in attack mode against Syd and loves to drag her around by her ears. She clamps onto Syd's neck, good thing there's a lot of loose skin there, and we've seen her with Syd's entire foot in her mouth. 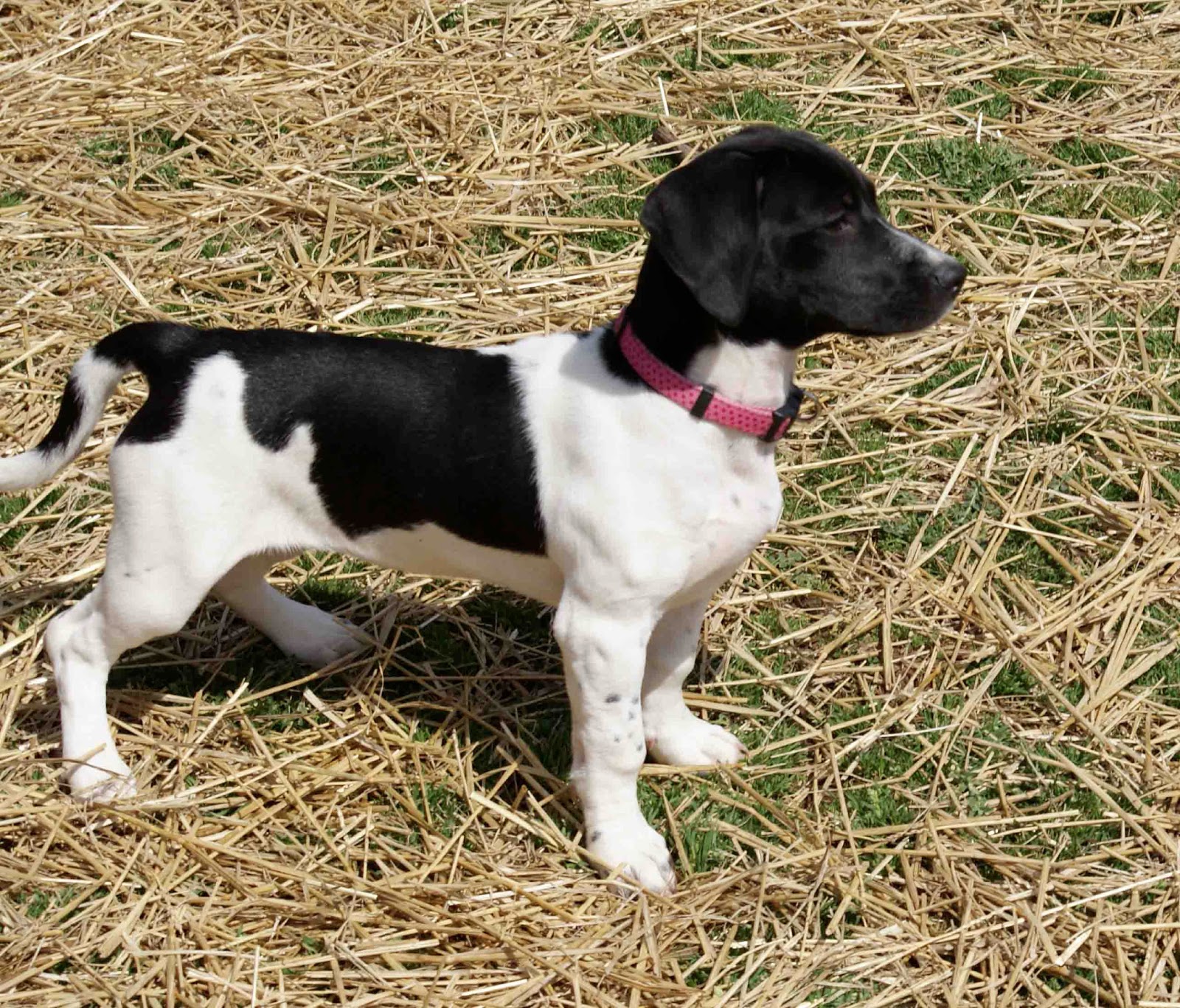 They do occasionally work together as a team, but more often one is chasing the other to grab a toy away. 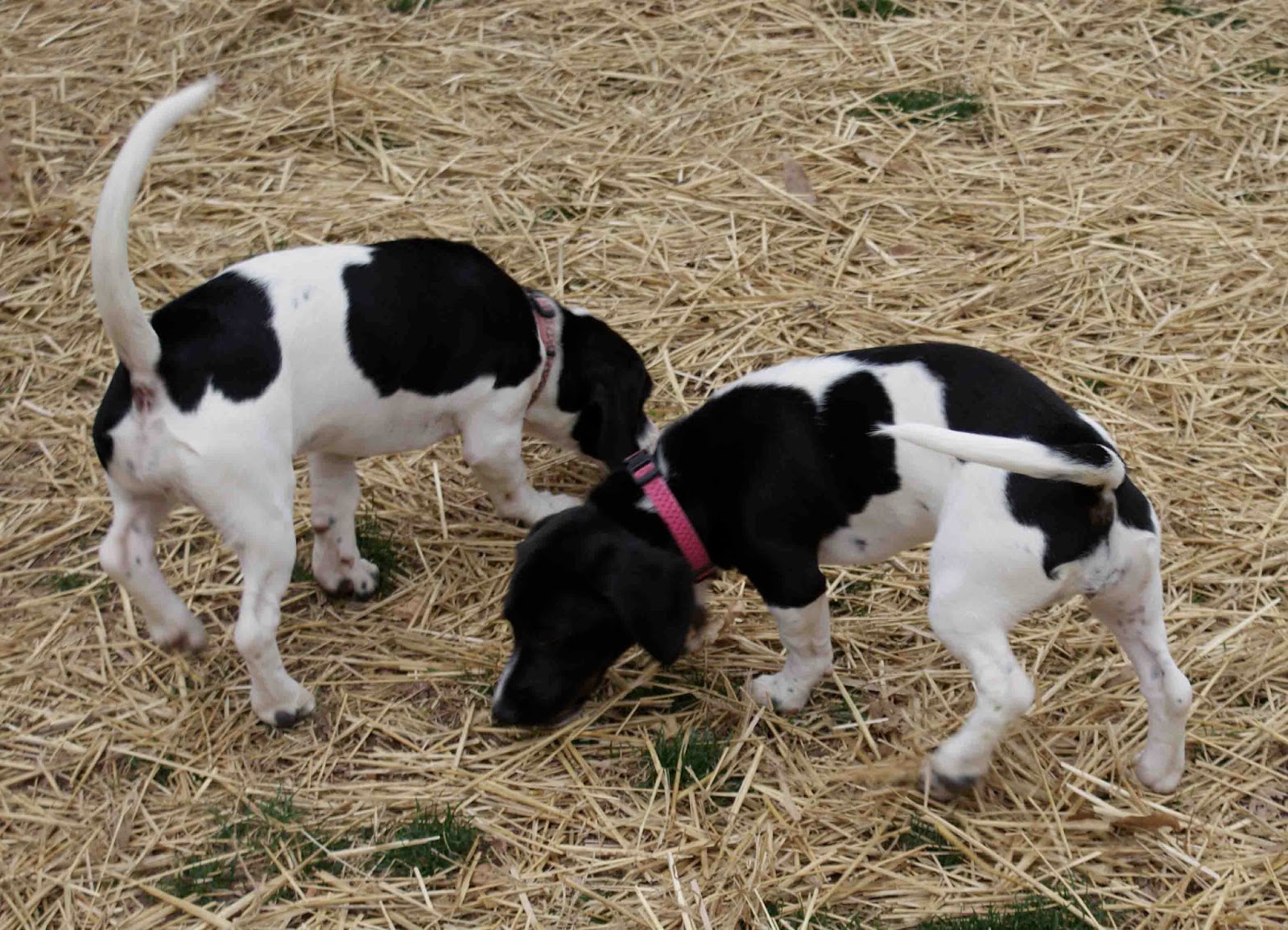 While Syd loves to be held and cuddled, Mac's favorite thing is to roll. 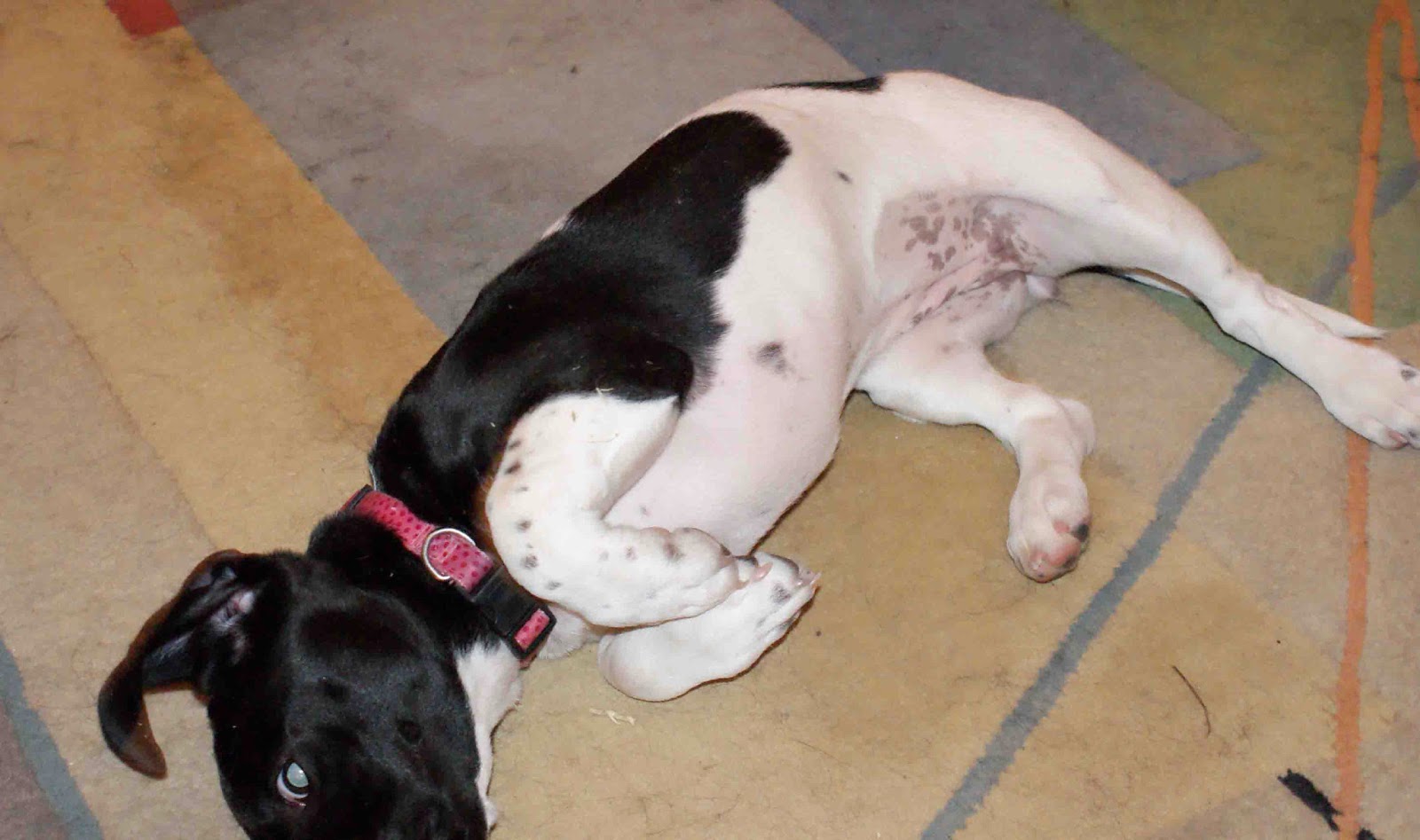 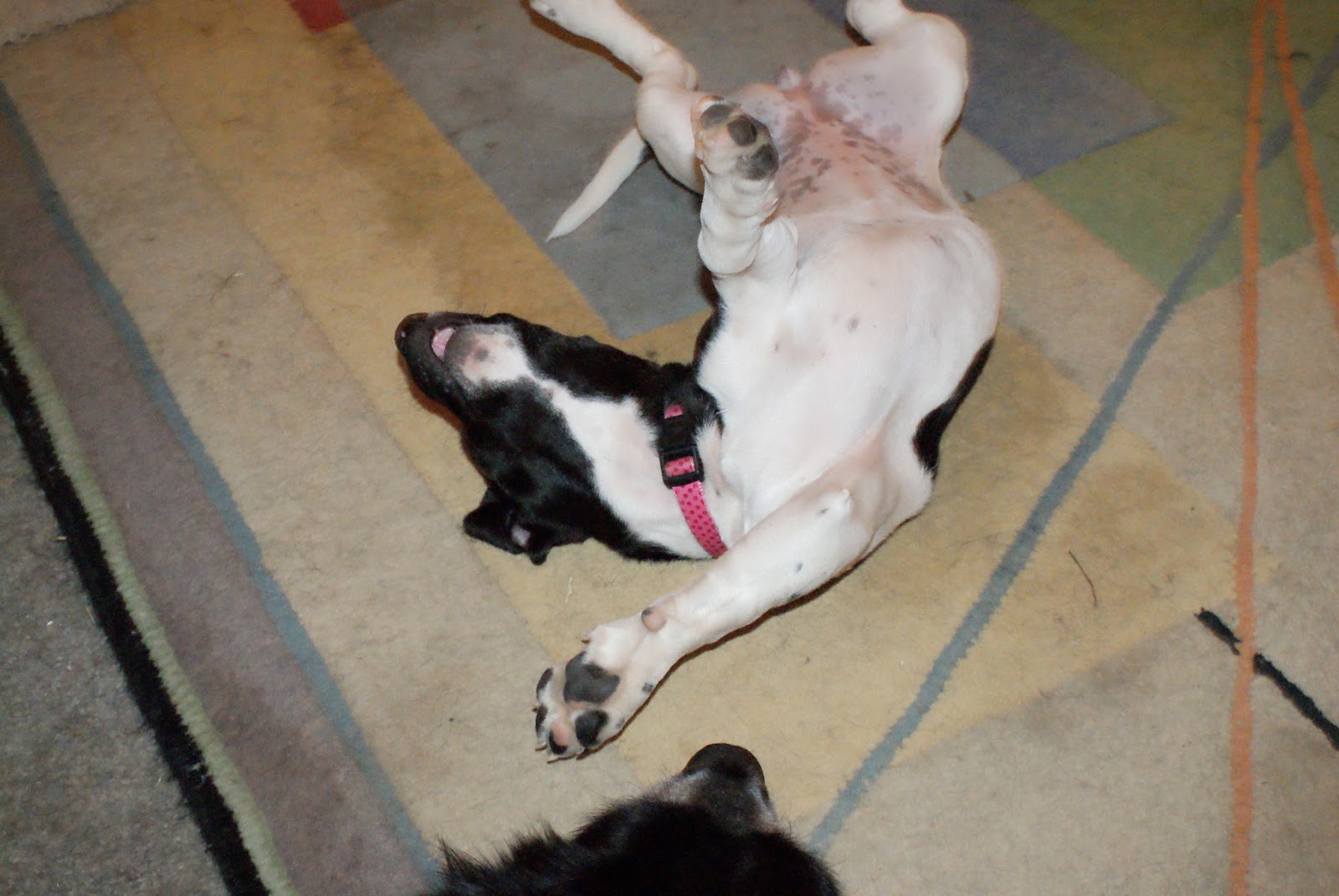 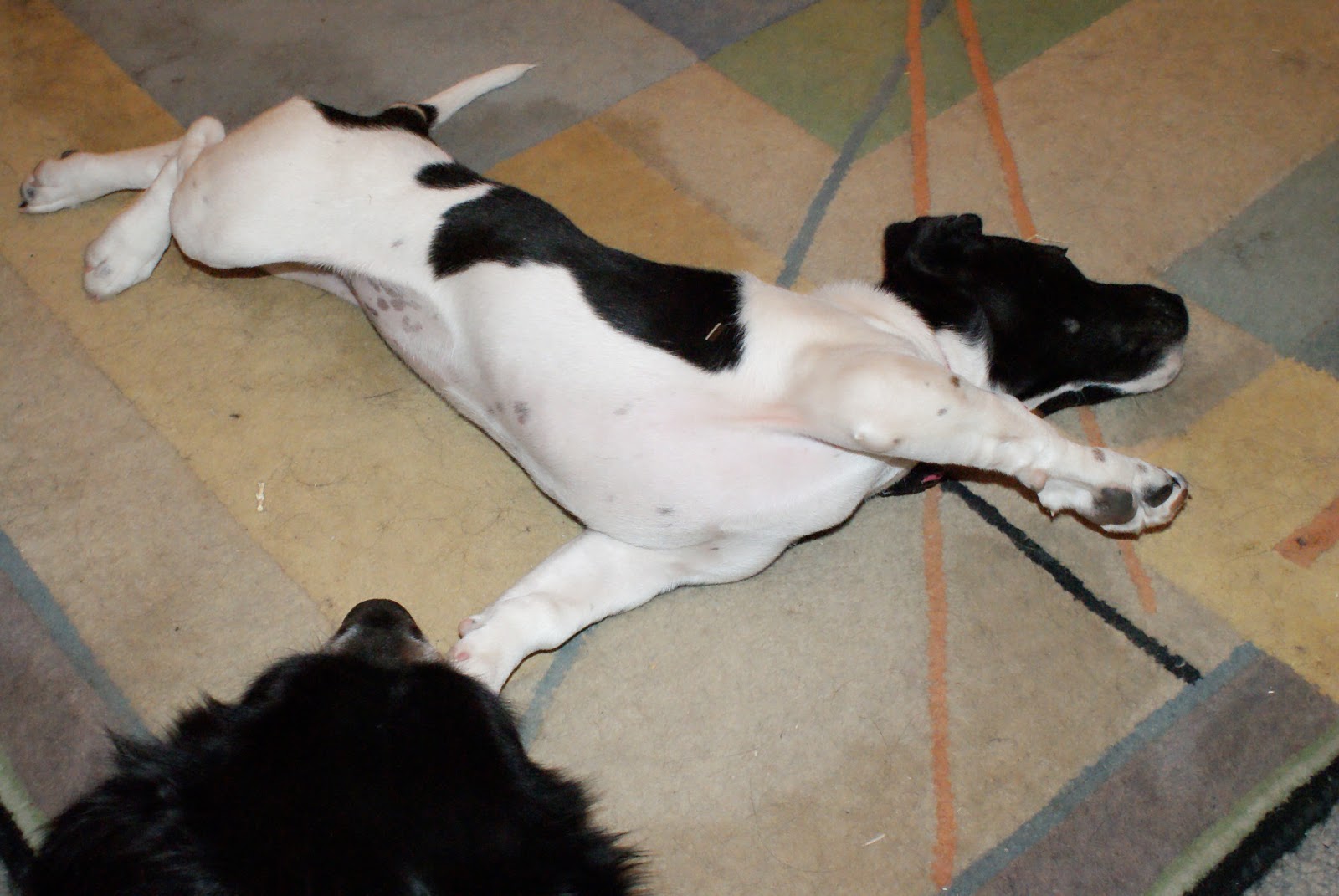 Inside or out, nothing beats rolling in Mac's book. 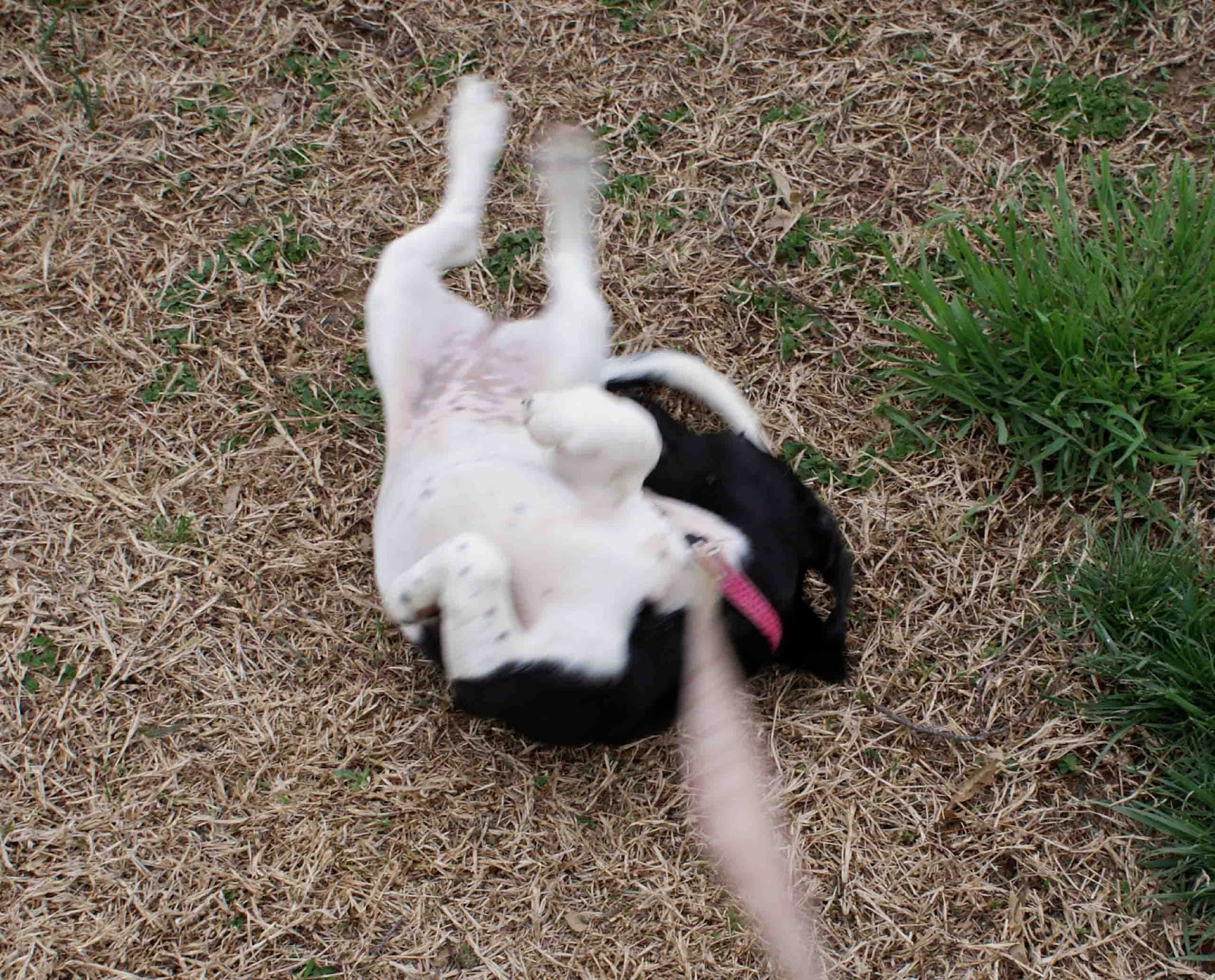 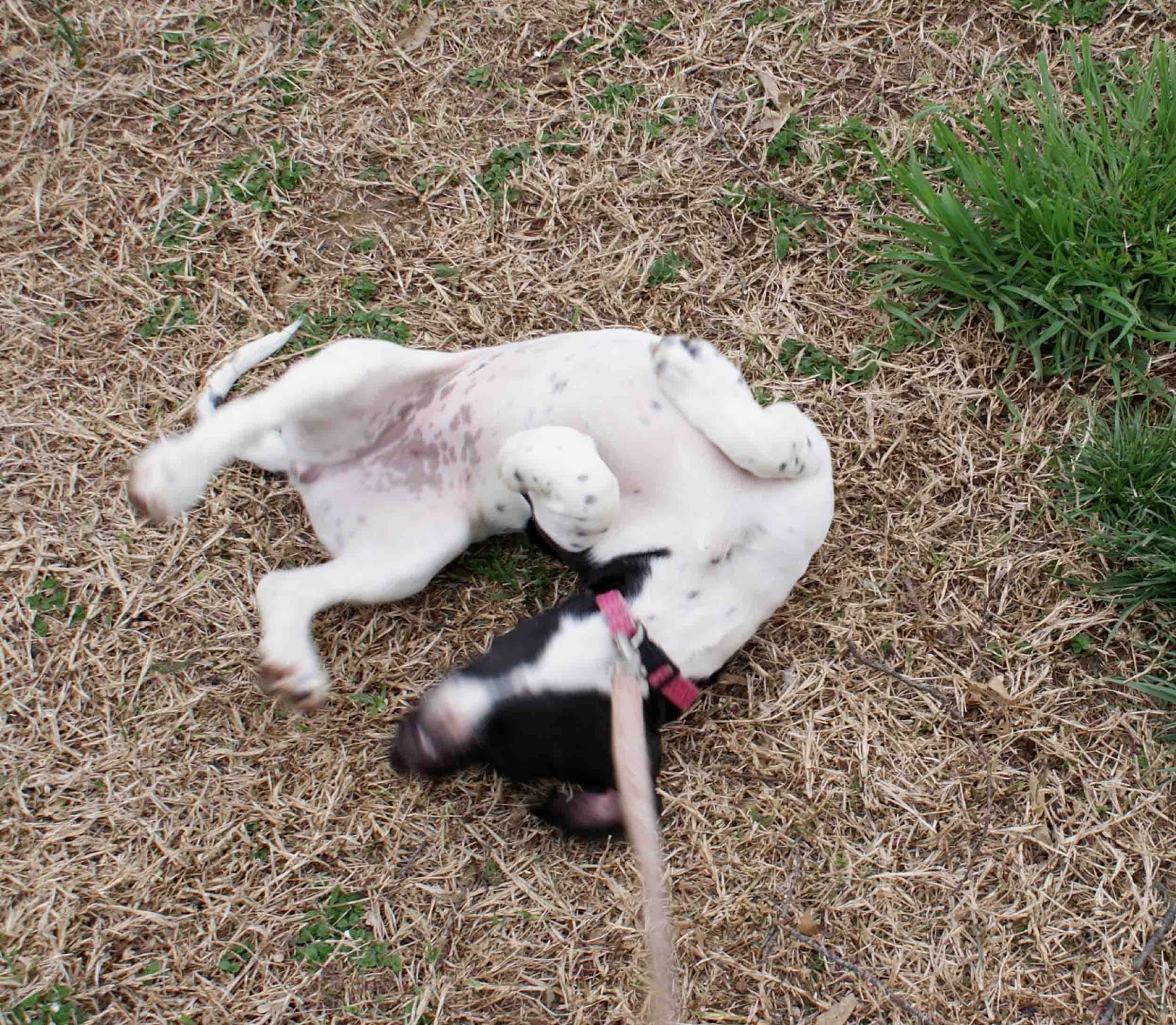 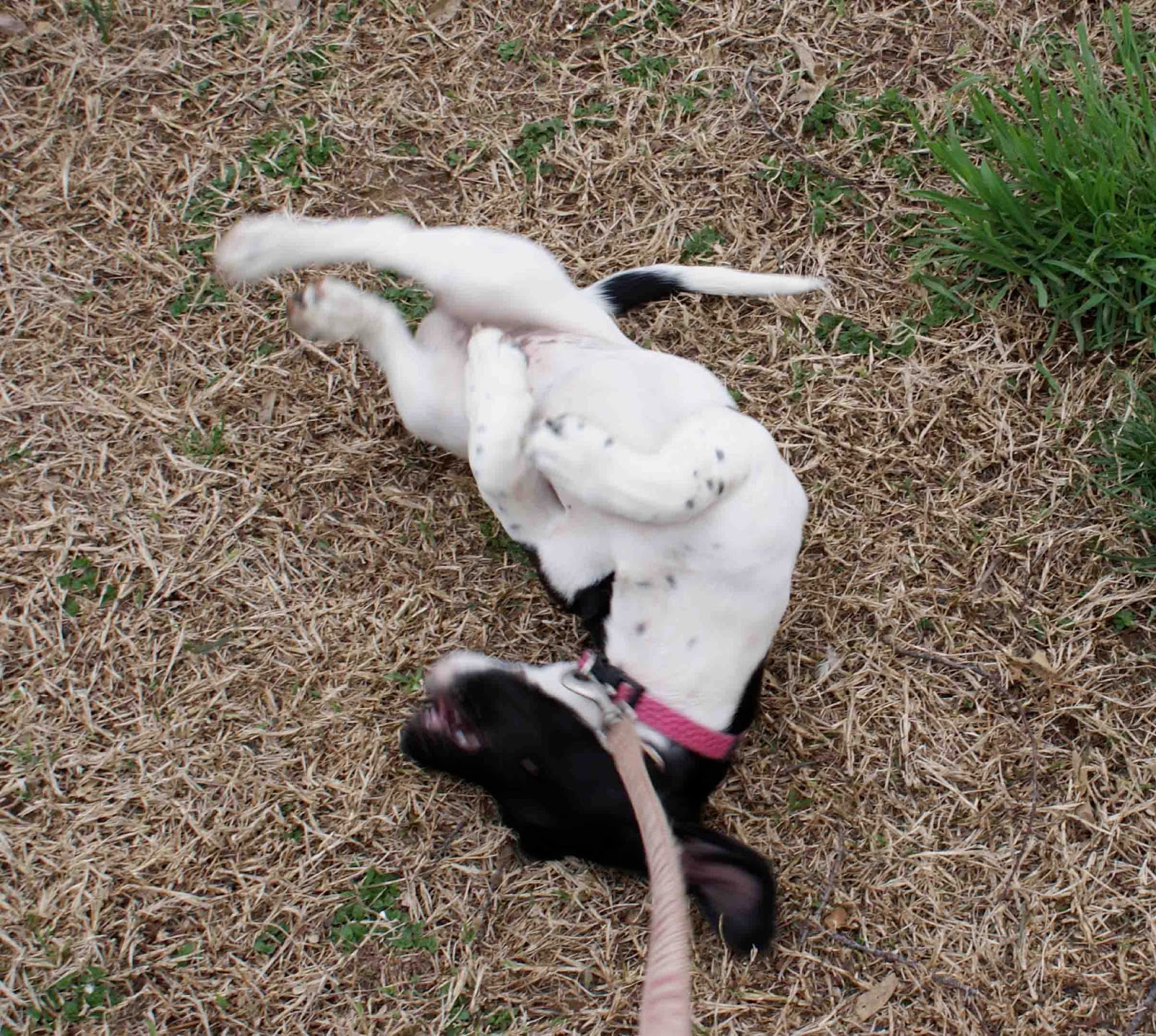 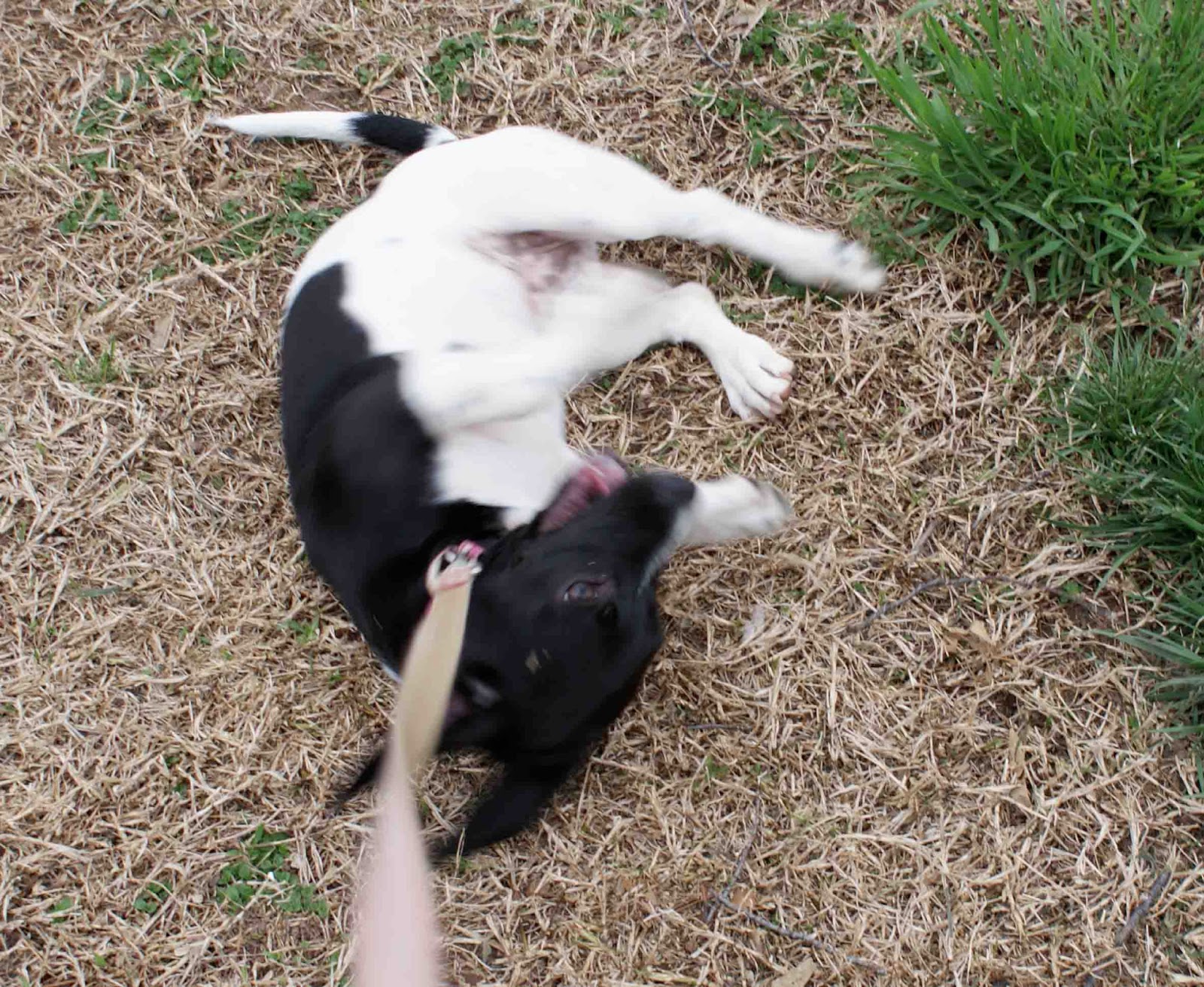 Don't forget about our giveaway. Leave a comment and you're entered. You get a number each time you comment and we'll pick the winning number on our 1000th post coming soon.
Posted by Sue at 11:26 AM

I know they're growing...but they're still puppies and SO cute. It's great you have a pack to teach them the way to behave. And that you put so much time and energy into training them. We've worked so hard with our Holly. And now that she's 1 1/2 we've mostly got the obedience things down. We're working on her still obeying even when there's a SQUIRREL!

Gosh they're cute. Reminds me that there's a litter of JRTs close by, and a basset litter within striking distance, not that I'm tempted...

Gg is still a BRAT when they play, and Sis simply won't discipline her. She'll bat the biter away, but gently, so clearly aware that her paw is about half the size of "the baby's" head...

My goodness how those two have grown. They definitely look more like little dogs than puppies now. But inside I'm sure they are still pure puppy. Having raised two sisters here as well, it has been an interesting experience. Totally different personalities, but both can be love bugs. Minty is a very dominate personality and blames her sister Carly for everything and can be a bully. Carly thankfully is very passive and couldn't give a hoot, so so far no big ugly fights. However I think of Carly as more high strung (read drama queen). It's fun.

I'm also glad to see Sebastian has decided to make your house his home and adopt a new person. It is so hard when they are looking for 'that person'. Heartbreaking really. I think some dogs will adapt quicker, but some never do. Just like people I guess.

Sounds like Mac wants to be the boss:) They are both still as cute as can be - and variety is the spice of life:)

Yep not much beats a good roll, especially in the grass, looks like they stiil enjoy each others company!

They're so cute and with such different personalities. They must be so fun to watch.

Both of you girls are just so adorable! Maybe your mom can turn rolling into a trick and you can get a treat for it, Mac!

They are just too precious! adorable shots!

They are getting so big!

Pups just grow up too fast. They sure are adorable! And you always have one picking on the other. It's the same way here with our two 1-year-old Chinese Cresteds. One is ALWAYS in trouble.

They are getting so big! I'm glad only Mac is a major mischief maker. I'm sure you have your hands full raising two puppies at the same time. Their contrasting personalities will keep you entertained (and on your toes). :-)

Man, they're cute! So glad they're at your house, though...

they are both growing up beautifully... such fiesty lil girls.. esp Mac but i am sure they are a lot of fun. They are so so so adorable when they are tiny with short legs.

They grow so fast right before our eyes. So adorable
Benny & Lily

It's amazing how fast they grow!

Mac is a lot like my sissy Cinderella. She likes nothing better than to roll around on her back -- unless it's rolling around and then getting a tummy rub!

OMD! They have gotten soooo big! They are just adorables....Ma says 'awwwwwwe' everytimes she sees em'! She also says Mac sounds like ME! What?! Okays, maybe a little...I do likes to get into troubles, I do like to boss everyone arounds, and I am not really a 'cuddler', I really don't like to be held...okays, maybe I'm ALOT like Mac!! BOL
I thinks Mac ROCKS!! hehehe
Kisses,
Ruby

Those are some adorable baby pictures, and they are growing up nicely. I'm still glad that Rob was not allowed to name Syd "Fat-ass." It might have harmed her self-esteem.

And I think Syd has chosen a perfect person for herself. A cuddler is just what you like, I think.

Wow, I think that my dad wants to go get some more dogs, maybe Portuguese water dogs. There was one in my agility class a long time ago. We really liked him. Thanks for visiting my blog.

They're growing fast, alright. How do they get on with the Portie girls? Can't imagine the Portie girls will tolerate any delusions Mac may have of being the alpha female :)