I'm back! I was finally able to convince Fudge to let me do a post. He's quite into his storytelling these days and is pleased that he can share his slightly confused stories with you. I told him I had some important things to write about so he's taking some time off. First I have a story with a happy ending to share.

Remember back in July when this thin, tired and dirty dog showed up? This was Sebastian the day he arrived. He was in dire need of some TLC. 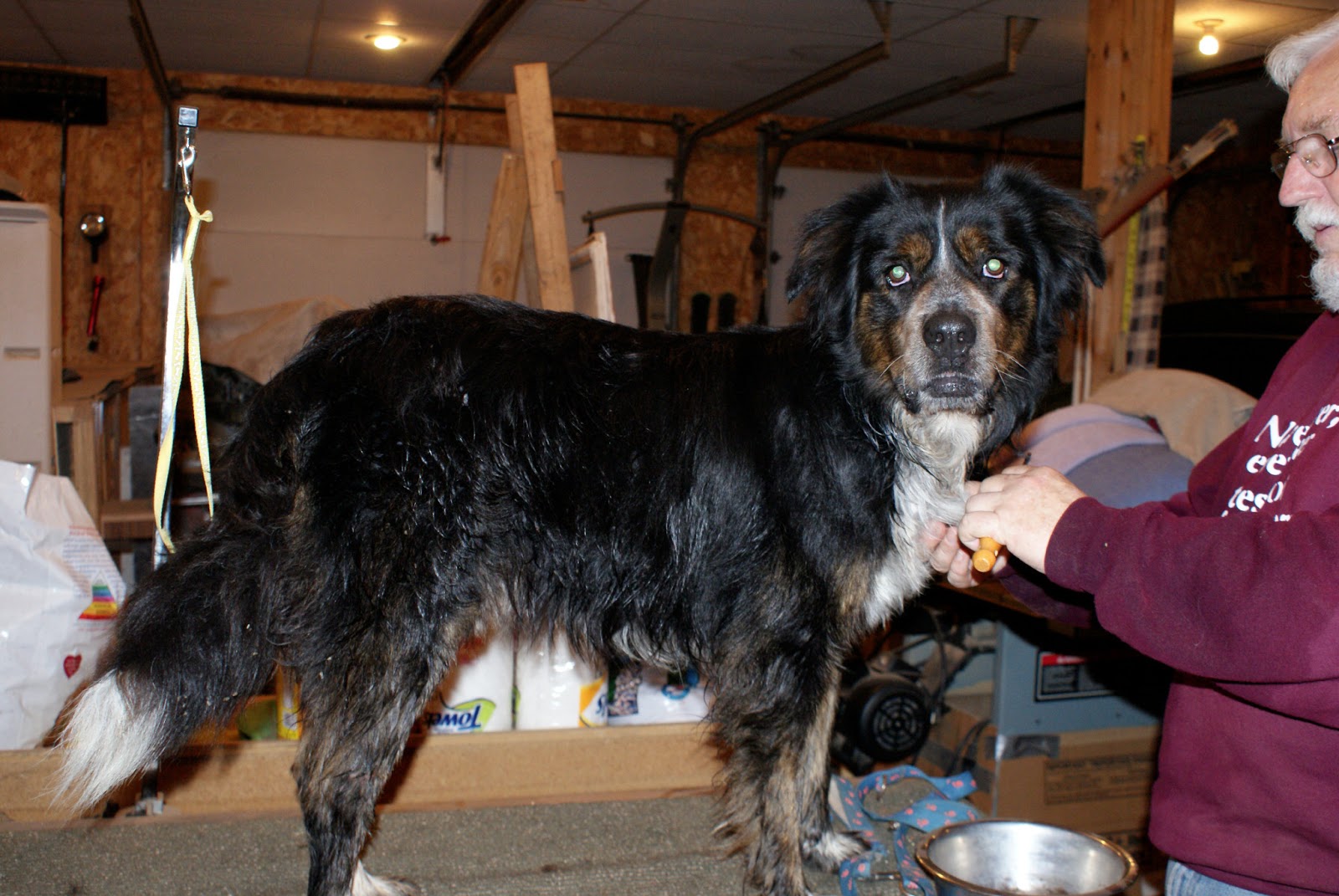 Well, as you all know, Sebastian became part of our pack and fit in very easily. He gets along well with all the other dogs and he's gained back the weight he had lost plus a few extra pounds that we're working hard to lose again. 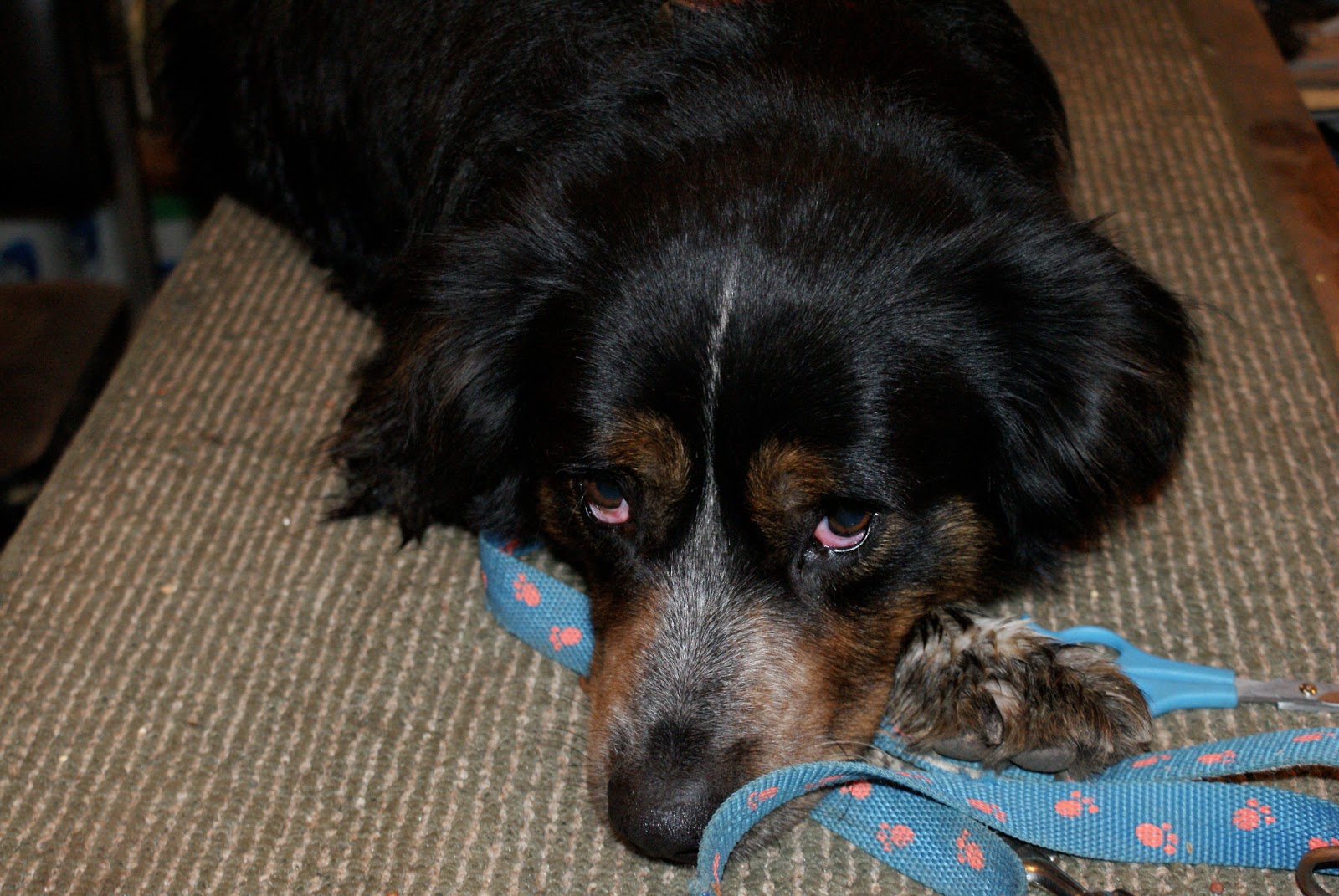 Over the last few months we've made some discoveries, some good, some not. For instance, we've learned that at an early age he had some sort of accident that left a lot of scar tissue in his hip and leg. We'll never know exactly what caused the injury, but he shows no fear of other dogs or cars. The recent surgery in that area has healed nicely and we're hoping that's the end of the problem.

We have learned that Sebastian is afraid of thunder and other loud noises and refuses to go outside in the rain. He does love the snow and would spend all day playing in it. He also likes to sunbathe till he's hot to the touch.

We believe that Sebastian was well cared for and his master worked with him. He has excellent manners, knows some basic commands, does not get in any trouble in the house and he can catch like a pro. I learned this by accident one day when I tossed a treat to him and he caught it midair. He loves to ride and settles right down in the car.

We don't know why he became homeless, but our best guess is that he may have belonged to someone who went into the military service and whoever was left with the care of his dog, didn't care enough to take good care of him. Another possibility is that his owner died and whoever inherited the dog didn't want him. Whatever happened, it was very sad for Sebastian. For months Sebastian has been looking for the person he lost. When he met someone on the street he would run up to him to see if it's his special person. He watched every car that went by to see if his person was in it and when we took him into the yard he stared up the street as if looking for someone. It was sad to watch.

Now the happy ending that I promised. A few weeks ago Sebastian seemed to make a decision. He has decided that this is is home and he has his very own special person again. 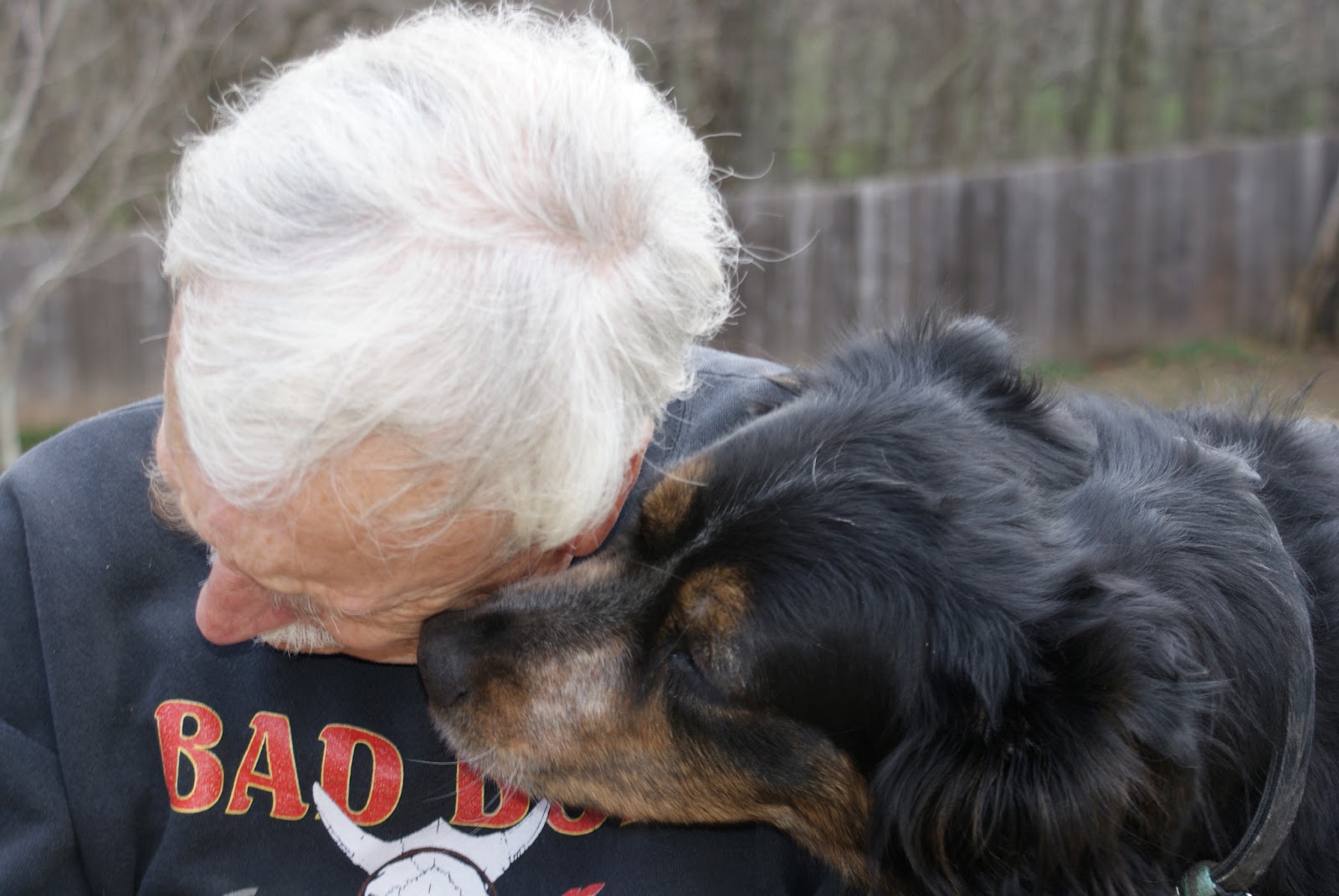 He's more relaxed and just seems happier, but he does want to be with Rob every minute of every day. If Rob has to go out without him, he sticks close to me, but it's obvious that I'm his second choice. We're both glad that he's happier. 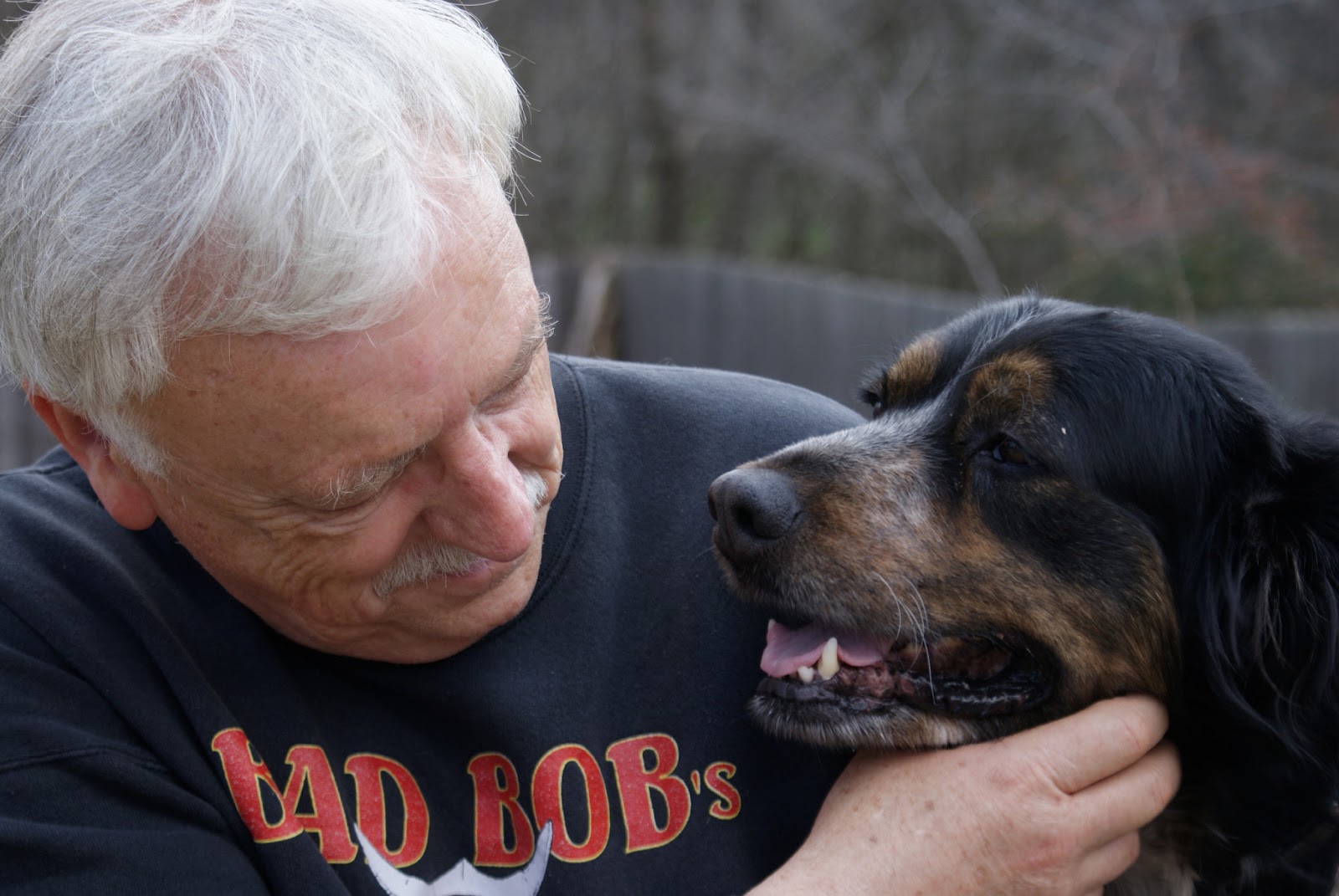 This afternoon Rob and Sebastian and I will pay Dr B a visit to check on our boy's latest lab tests and set up a program to help him lose weight and sooth his sore tummy at the same time. We want to keep him around and happy for a long time. 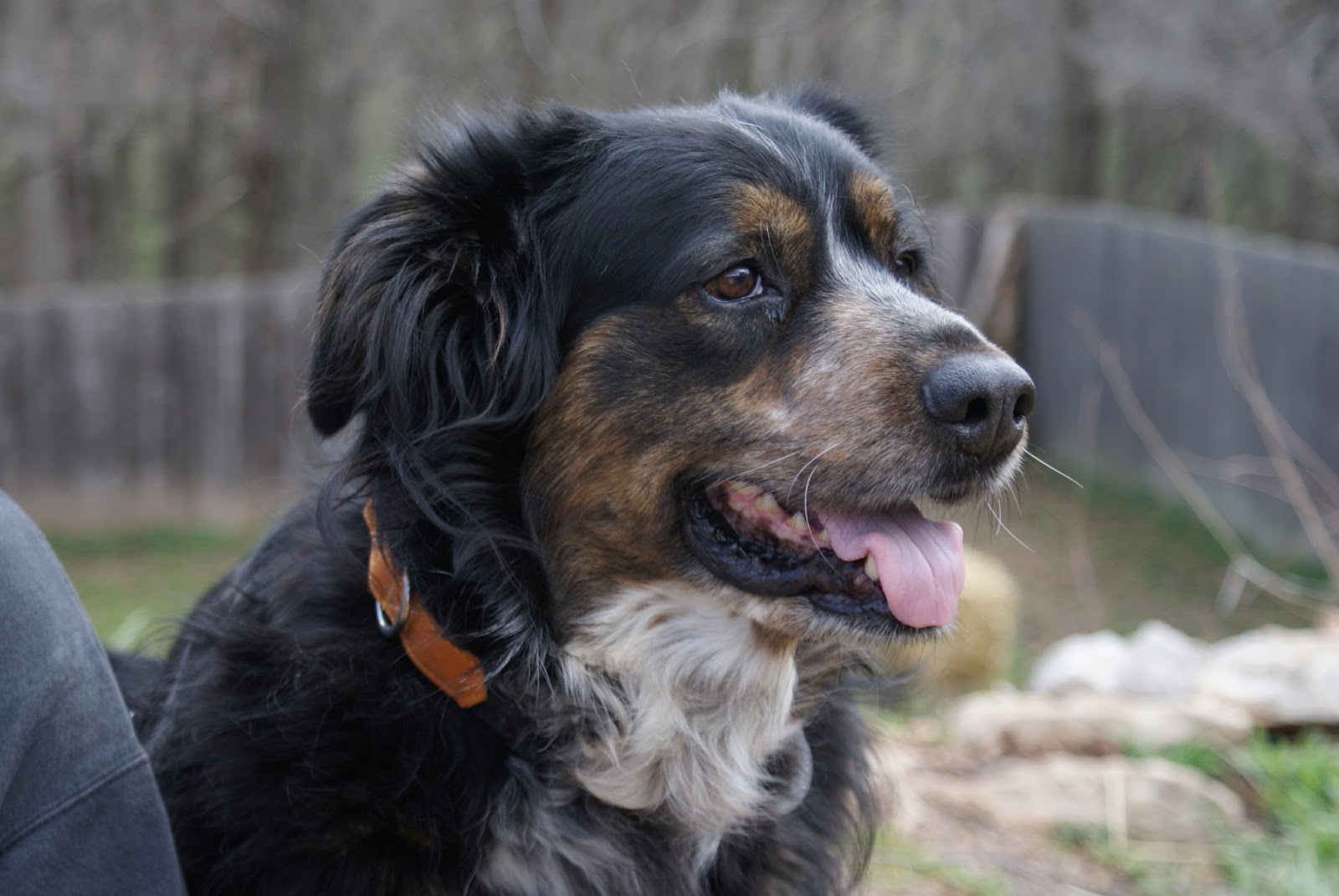 Now, one more item if you're still reading. This is blog post # 995. We'll soon be hitting a big milestone at the Portie Blog and we want to share it with our readers. Everyone who leaves a comment on today's post or any of the next four posts will be entered for a giveaway. When we post our 1000th post we'll pick a winner and send a gift from all of us. Please join us for this big event.
Posted by Sue at 12:02 PM

How exciting! Congrats on both the blogging milestone and on Sebastian's adoption - of you. He chose well, even if it did take him a while to reach his decision.

O.G. (short for Old Guy), the dog we had before Wrigs, was a deaf, geriatric dog that I adopted from the shelter. He was probably about 13 when we got him and he only lived for about two more years. He always seemed to be watching/waiting for his person. It was so sad. I never felt that he completely bonded with us.

I'm so happy for Sebastian that he has decided Rob is his person. I hope his lab work looks good and you figure out a good diet plan for him!

That makes me so sad...Sebastian looking for his person. But, I'm so glad that he's found his home with you. We adopted our Holly when she was 8 weeks old, but she has some strange fears. She HATES rap music. Something with a deep base sends her running for her crate. Now that's not the music we normally listen to, so mostly she's ok. But, if a song happens on a station, that sends her into a fit. And then this spring as my hubby has been doing yard work we've discovered that she's afraid of his yard work gloves. She loves M. But she'll run and hide from him if he's wearing those gloves. Sometimes it's hard to wonder about a pet's past life, but I try to just think about the future.

It's so nice that Sebastian is devoted to Rob. It's sad that he kept looking for his person for so long, and wonderful that he has found a new person to adore. He knows that so many of the others are devoted to you, I'm sure. He's a handsome boy, and I'm delighted that he found such wonderful people and pack mates.

You have our mom smiling through tears. We are so happy that Sebastian truly loves his dad and mom and his furfamily!
Congratulations on almost 1,000 posts!

So glad that Sebastian has decided that he has found his forever home and Him and Rob and budds, cause now life is fun again. You gonna let Fudge do the 1000th post, cause we know that would be special, Barharhar!

Your Pals
The Mad Scots

You know when you read those stories about owners who die and the dog waits and waits for him/her to return for the longest time. The one in Japan who sat at a rail station every day for years and finally had a statue erected to him, Sebastian is only following that way, but I am so happy he has found his home now (I felt he had when he was teaching the puppies to be good!) He is really a beautiful dog and deserves your kind of home.

We think Tsar knew that Sebastian might not find his former owner and just knew his forever family had to to at your place. All paws crossed for a good medical report.

This is such a nice story with a very happy ending. Sebastian knows exactly where he belongs.

Oh Sue, this is such amazing news. I do wish dogs could talk because it would nice to hear from Sebastian what happened, but I'm so glad to hear that he adopted Rob. g

Sebastian is such a handsome fellow. I'm so glad he decided to stay with you and call your little bit of heaven home!

What a happy story. it makes us feel good that Sebastian has settled down and feels safe and loved.

And congratulations on your 1000th post. We're quite a ways off that....

I felt so sad reading Sebastian's longing for his old human. It's great to think he's made a decision to move on. I guess it's like we have to do. We grieve for as long as we need and then we have to start living again.

BTW, don't enter me in your competition, because I'm too far away. (Australia)

Oh Sebastian, I'm so bummed you were lost and sad, butts I am REALLY happy you found such a great pack to lives with furever!
You do look like a happy dude. {{hugs}}
Wows! 1000 posties??! Congrats!!
I thinks maybe YOU should be gettin' the prize! hehehehe
Kisses,
Ruby

Now how can you not leave a comment after that post. Shaggy dog story that has a happy ending.

Luvs to that beautifully restored boy. Happy up and coming post too.
Luvs Freya Rose Blossom and her second best :-) x x x

Wonderful post! So happy to hear that Sebastian has truly found his home and special people now! YAY for love!

Howdy Mates, we're so glad Sebastian has realised he is in his forever home and he has a family who will love him always. We're wagging extra hard that he has decided Dad is the cream on top of the cake hehe. If you remember our Sissy adopted a senior doggie (a friend's dog who was moving interstate and could not take her). The other day they met her previous owner and Jinx was happy to see her but raced back to the car with our sissy when it was time to leave and it made our sissy feel wonderful. Your post has made us feel wonderful too. No worries, and love, Stella and Rory

Sebastian, we're so happy you feel like you've found your forever home at last. It's good to know you were loved so much before. Even though it was hard to make the switch to a new home, you're one very lucky doggie to have found such a great one the second time around.

He looks so happy

I do remember your first post about Sebastian and I'm so glad to read about the happy ending especially! How heartwarming that Sebastian finally decided that Rob was his new special person! It was sad to read that Sebastian kept looking for his previous owner; how painful that must've been to watch!
Congrats on your upcoming 1000th post!