We've been missing in action all week with an emphasis on action. Sydney and Mackenzie have recovered from their operations and now that they are officially big girls we decided it was time for some serious lessons on manners. I think the big dogs wanted to leave home when they realized what we were all going to go thru this week.

Having one puppy in the house isn't too bad, but two has been a real challenge. I even found it easier to train when I had eight pups because if I was working with one, the others all had each other for company. But if I take one of these two with me, the other screams for her sister. 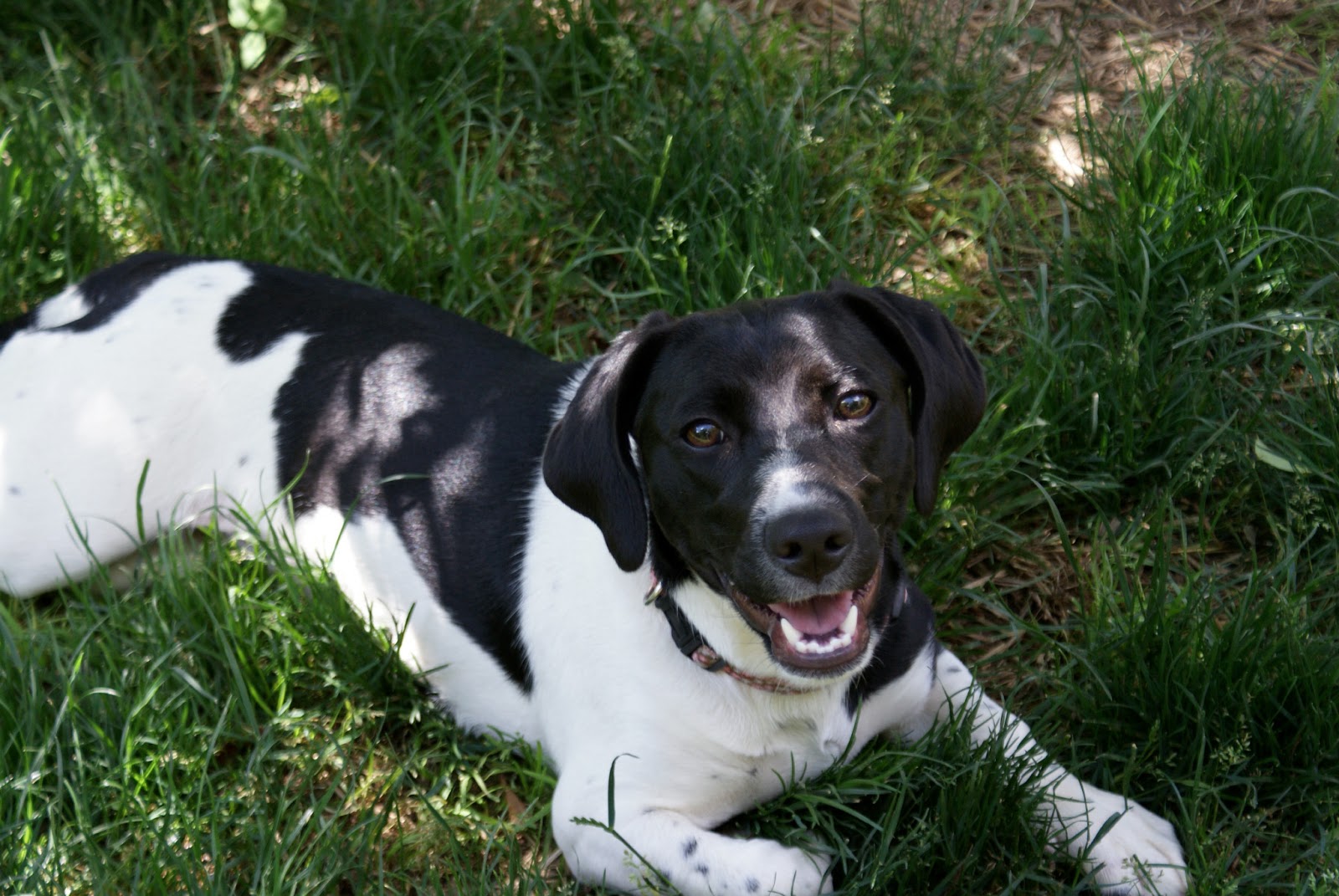 Our training tools this week were a couple of leashes, some treats, a spray bottle filled with water, a couple of crates, and a kitchen chair. I know you're asking yourself about the kitchen chair and I'll explain in a bit. 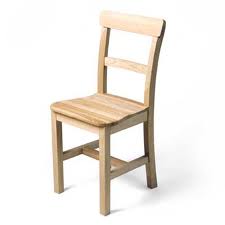 At first both  girls were on leashes and the leashes were attached to Rob and me at all times. I usually had Syd and she accompanied me everywhere I went and I do mean everywhere. At times the two were permitted to play together but all the while with leashes attached so we could grab them if they got too rowdy. After a couple days one was allowed to wander around, leash on but not being held by anyone. The other was still attached to one of us. We alternated so that each pup got some free time. They were rewarded for good behavior such as not attacking each other or the other dogs or not chewing things that weren't theirs etc. The were sprayed with water if they had barking contests or attacked each other. This does not work with Porties who love being sprayed and will keep coming back for more. 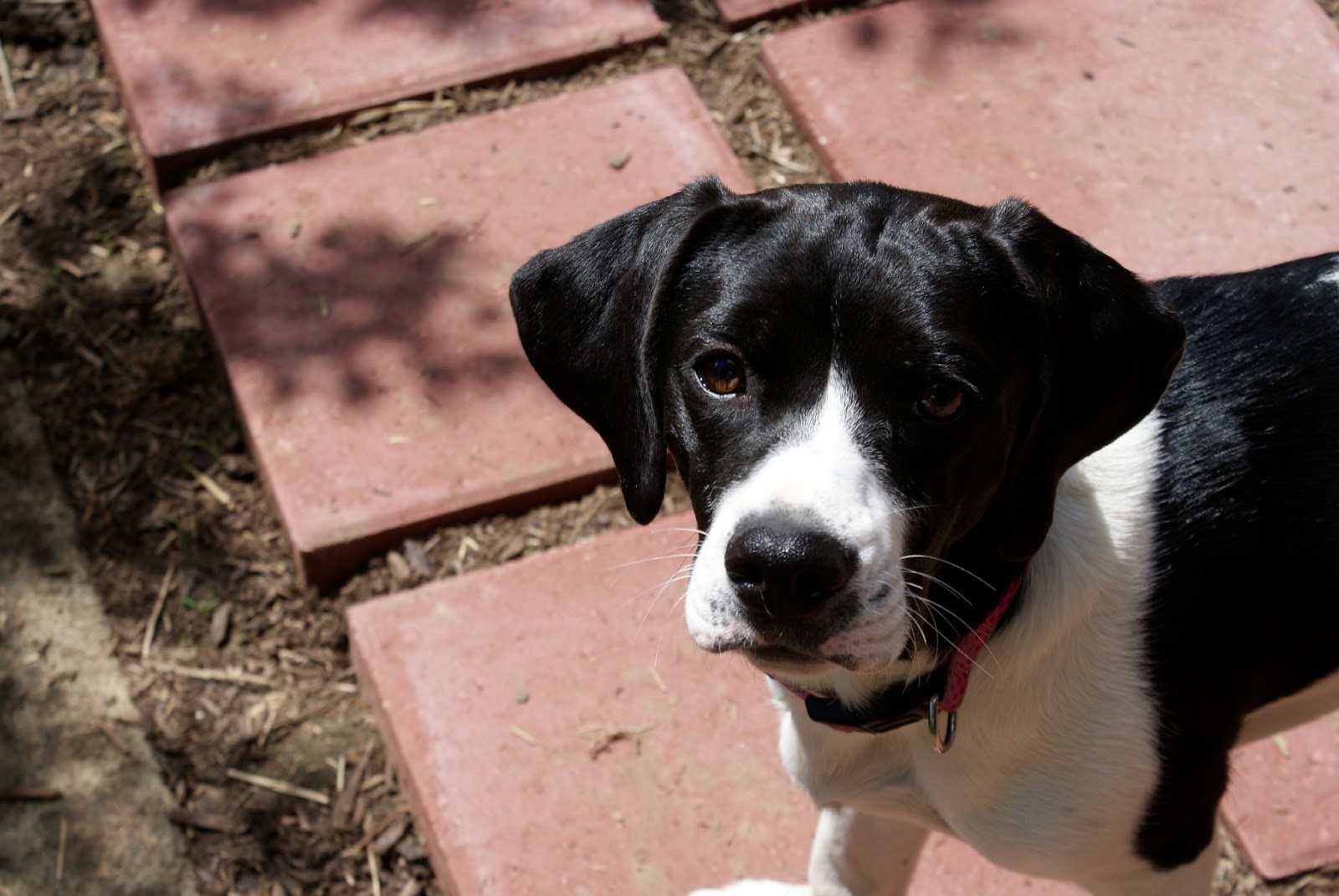 They were occasionally put in their crates for naps or quiet times and had to be quiet  in order to be released. They were fed separately from their own bowls and if they didn't eat, they were put into their crates with their bowls. Dinner is not play time. 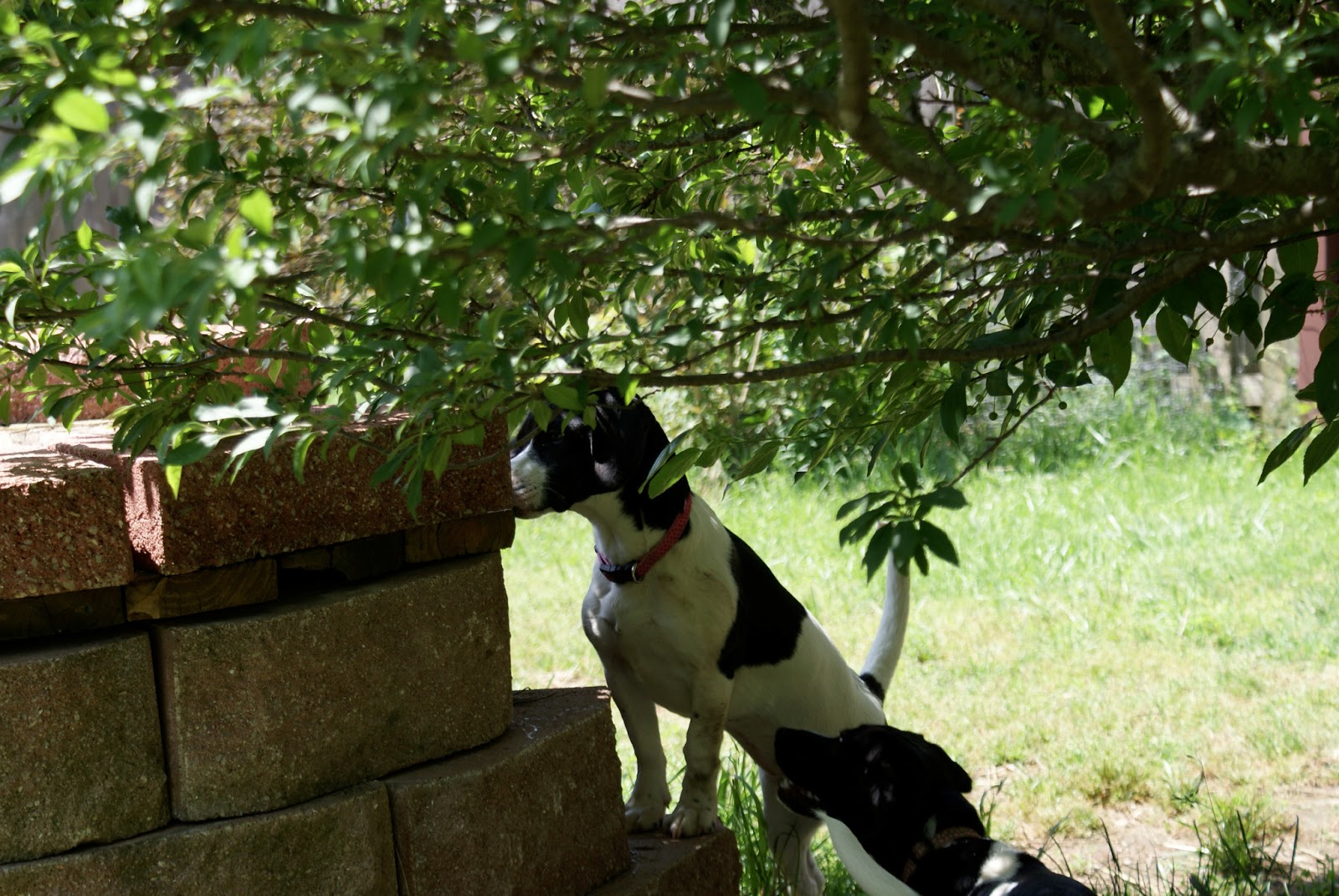 Because of the surgery they were escorted outside on leash until today when they were finally allowed to run. 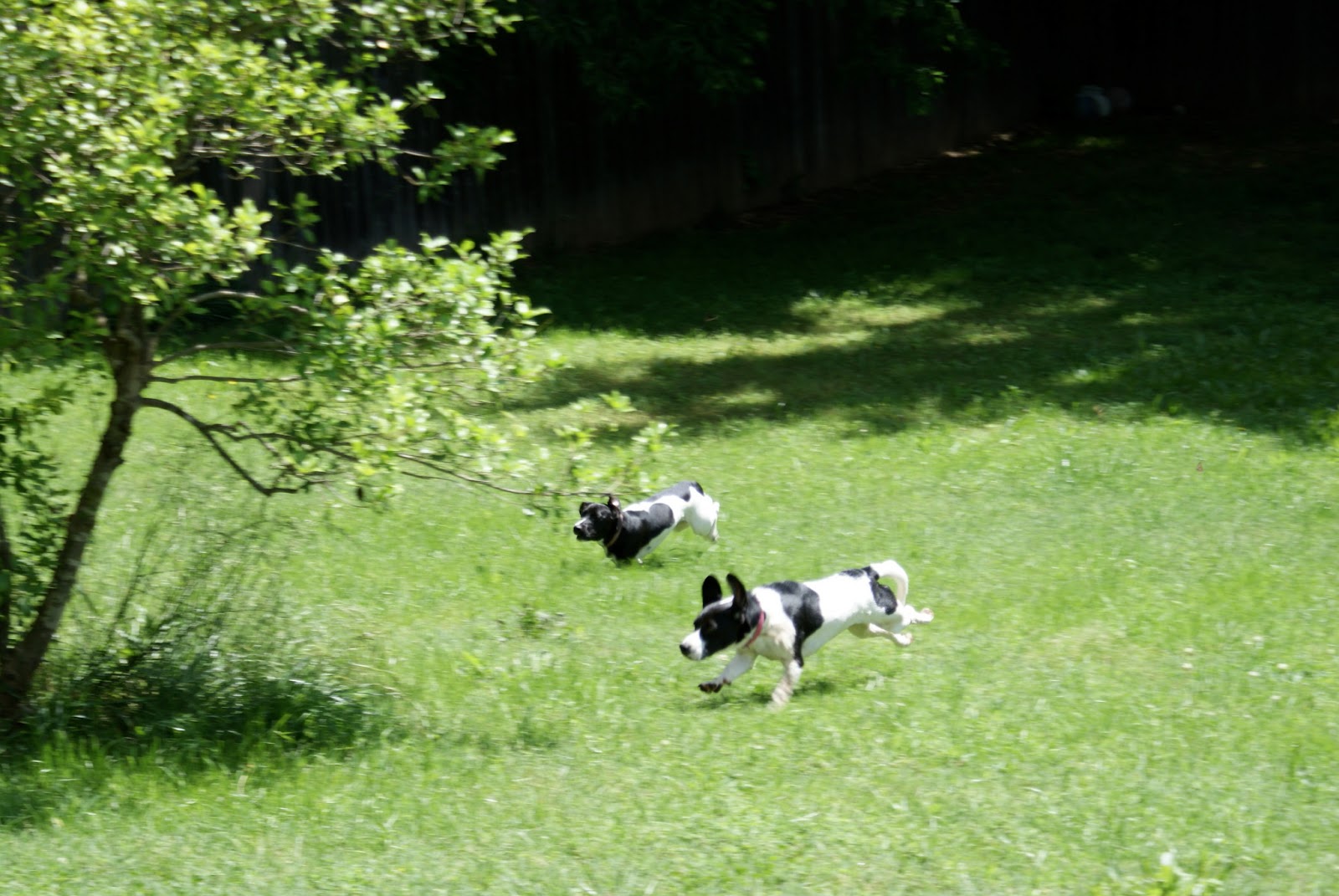 Wednesday Rob and I were having dinner and Mac was starting to get too wound up, so I tied her leash to my chair. She had no choice but to sit quietly and wait for us to finish eating. At one point I got up to get something and forgot that she was attached to the chair. She saw that as her chance to race into the living room and attack her sister who was quietly playing with a toy. The chair fell over and went bouncing across the floor behind her. She ran faster and so did the chair. Rob jumped up and grabbed the chair and released Mac. When I got to the doorway both pups were sitting very straight and very quietly on the couch. They stayed there without making a sound for several hours. They have a new respect for the chairs. 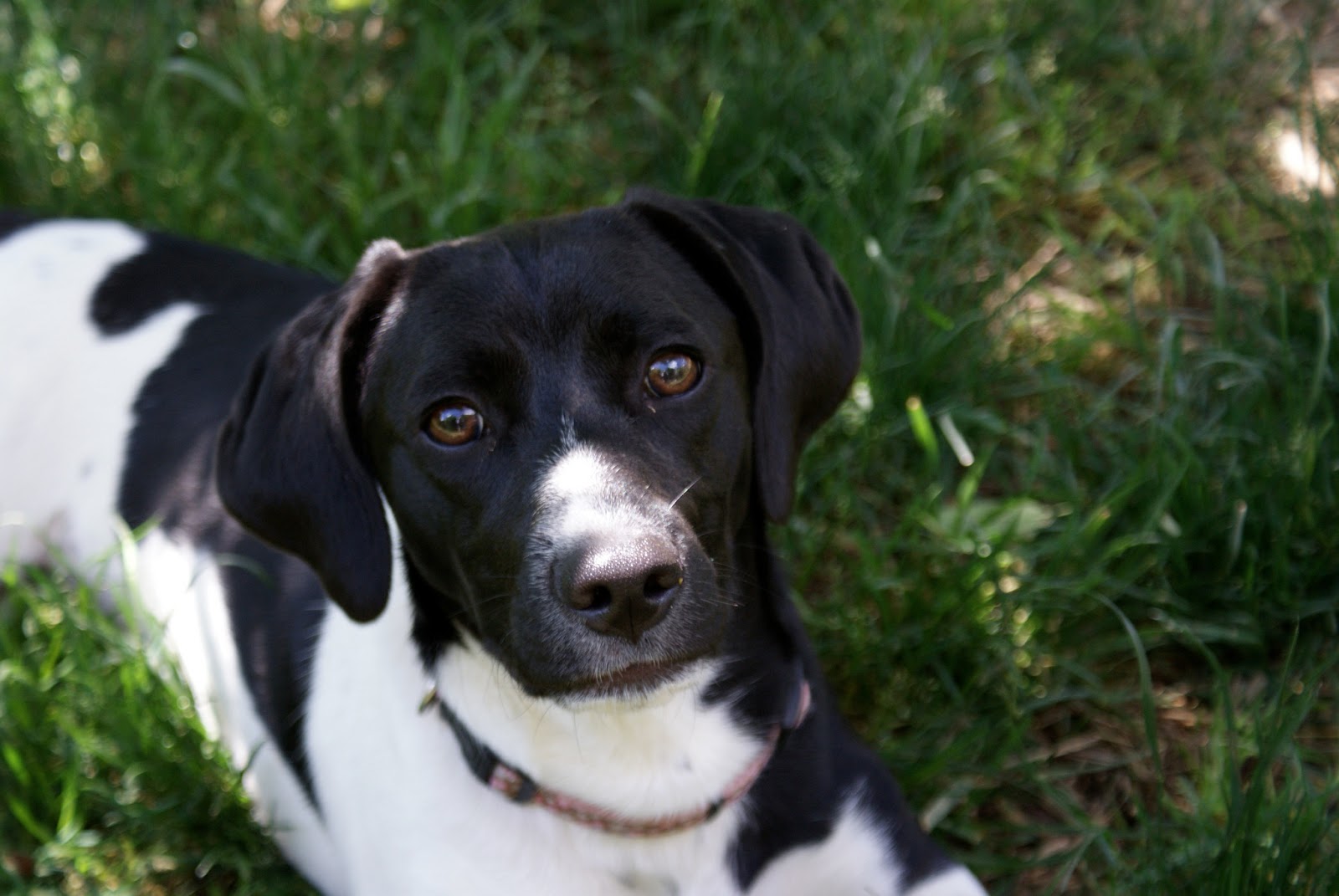 At bedtime Mac goes into her crate in the laundry room with a cookie but Syd is now allowed to sleep in the bedroom with us. She claimed the easy chair and as soon as she receives her cookie curls up in her chair. We don't hear a sound from her till morning. We hope that someday Mac will be able to join us, but for now there's no shame in sleeping in a crate. 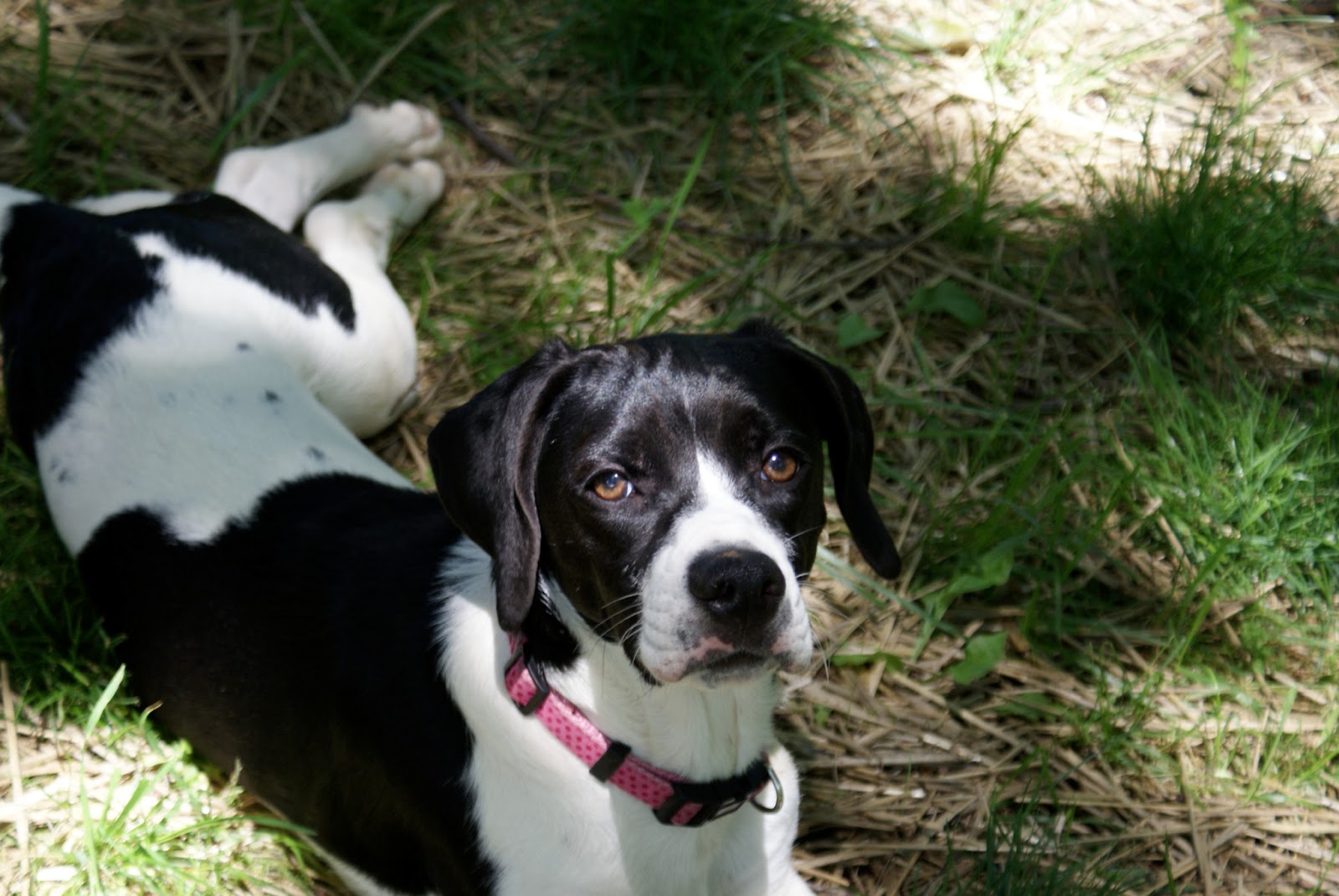 Being a puppy is hard work. There's so much to learn and being bad can be so much fun, but we're getting there. There's another new puppy in Blogville who will be facing some of these issues soon. Go visit Brutus. He's a very big, very cute boy. 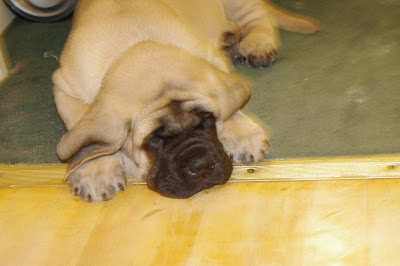 OMD! Growing up is the pits. Especially when you can't wrestle with your sister as much as you want!

We're sure your efforts will pay off and they'll become little angels.

Aww! We love hearing all about the puppy antics!! xoxo Chloe and LadyBug (we will go over and visit your new friend!)

How we wish you had captured the chair incident on video - too funny! Lightning probably would never set foot in the kitchen again if that happened to him.

Hope you have been having some of the delightful weather we have had for a couple of days. We know that heat is coming, but it has been nice.

I feel for you! Sounds like the boom has been lowered and it's time to grow up. Sometimes I'm still exasperated with the 'puppies' here, but oh my those first six months they wouldn't listen to ANYthing and everything was a contest. Hopefully Mac will mellow out some soon.

Take care--at least the weather has been glorious!

So Syd is the better kid? I would have loved seeing the Chair experience too,

After their surgeries, they will probably shape up much faster with just a little mischief now and then.

I had a table follow me too closely once, Mac, and it frightened me for a long time! I so feel for you!

What?! No biting of the sister?! My girls need to visit Camp Sue. Gg still nips and the Knight and Sis allow it. UGH.

Mac, we're sending calm, composed thoughts your way. Sissy says fake it 'til you make it is still working for her.

That chair incident must have been quite startling for everyone! I know they are still babies, but Syd and Mac are sure starting to look like grown-up dogs. Good luck with your training.

Thanks for introducing Brutus around! We tried tethering him to us, and he was utterly terrorized by the leash. I thought the poor fella was going to have a stroke trying to escape it. He is very well behaved, though, and won't wander away from us by more than 20 feet. And potty training is going all right - not perfect, but not awful. He does sleep in a little room by himself, but he will sleep for several hours, so that's a big help. Brutus will send calm thoughts Mac's way - I guess the calm disposition goes with being a giant puppy!

That's great training job! Piappies Mom is also trying to figure out how Wai-Pai and Forgie can get along better here. Do stay safe, Syd and Mac.