When I was thinking about breeding Samba, the owner of the stud I planned to use contacted me and said she had a promising puppy. She asked if I'd consider taking him and waiting till he was old enough, then using him as the sire of my pups. In the picture she sent, he didn't look all that promising, but then he was only four weeks old. He had another strike against him too. He was brown and I really preferred black Porties. 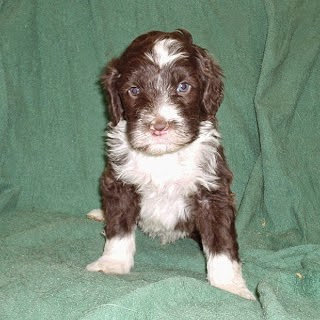 She told me that the pup had a sterling pedigree and when she sent a copy I saw that she was right. His sires and grandsires were the three dogs I had considered as possible mates for Samba. She also pointed out that his maternal grandmother was a littler mate of one of the top dogs at that time, Primo. His full name was MBIS, MBISS CH Del Sur's Makin All The Right Moves AOM. He was called Primo and he was a beauty. He was ranked in the top ten for three years and he won honors at two PWDCA National Specialties. Primo was a beauty. It was the reason I agreed to take the funny looking pup. 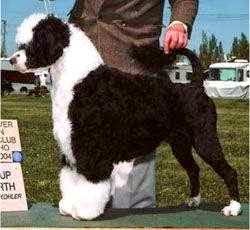 Today we received word that Primo has gone to the bridge. He  ruptured a disc in his back and became paralyzed. At his age, letting him go was the kindest act.

Yes, as you guessed, that funny looking pup was our very own Fudge, who we think turned out to be a very handsome dude. He's the father of all our other Porties, so he did a great job.

We are happy that you were our Uncle Primo and sorry that you have left us. You will never be forgotten. Rest in peace Uncle Primo.

Sorry Uncle Primo had to cross the bridge. Now that Fudge guy sure was a cutie little guy....and he may be something else , but he is still a cutie, we loves our FUDGE!

A beautiful dog. We are so sorry. Praying for his family

We are so sorry to hear about Uncle Primo. He sure was a handsome boy and so are you, Fudge. GodSpeed, Uncle Primo ♥

He was handsome. I'm so sorry to hear of his passing.

I thought that pup looked like Fudge! Uncle Primo was a handsome dude. Having had a dachsund who was paralyzed at the age of 5, that was the best decision for Primo, but still heartbreaking.

Sorry for your loss.

RIP Uncle Primo. He looked a beauty. Fudge, you looked adorable as a little pup. So fluffy and cute. Take care mates. No worries, and love, Stella and Rory

We feel bad that Uncle Primo is gone.