These Boots Are Made For Walking and Chasing Squirrels

As you saw in his little video yesterday, Fudge is doing great. He can do almost everything he wants except scratch that left ear. His foot has feeling and he can support his weight on it.  This morning he accompanied Sebastian to the vet's office to show Dr B how well he can walk and he even stood up on his back legs to greet the doctor. Dr B says he'll improve even more over the next four weeks and he may even get to scratch his ear. 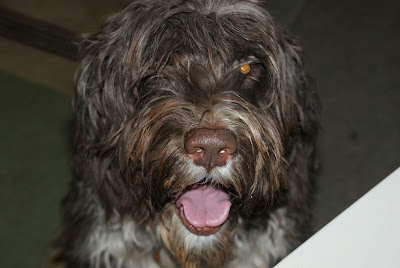 When Fudge first had the stroke, he dragged his left leg and it had no feeling. We needed to protect the foot from abrasions so I grabbed a pair of boots that I had for Samba. These were designed for protecting a wound, she'd had surgery to remove her dewclaws. They were really nice little boots that worked to keep her incisions safe and clean. I was worried about her walking out of them but they fasten so well that it was never a problem. They have a zipper plus a band with velcro strips to keep them secure. 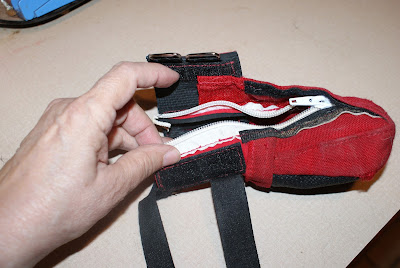 These worked for Fudge long enough for me to order him a pair of boots designed especially for dogs that drag their feet from injury or stroke. These are nice strong boots. They are long to fasten high on the leg and keep them secure. They also have double sided leather foot pads to protect the skin on top of the foot when it's dragged across pavement. 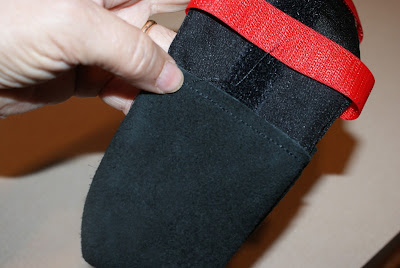 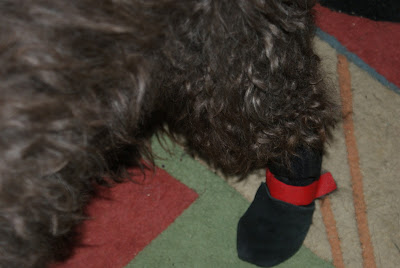 Both of these specialty boots came from a company called Pro-Active Paws. They make all sorts of specialty boots for dogs. They have boots for pets who don't want to get salt or ice between their pads, boots for sled dogs, boots for wound protection and more. They also have leg protectors for athletic dogs who slide and injure their legs or dew claws. They will even make custom boots for whatever your dog needs. They are wonderful to work with and answer any questions, make helpful suggestions and try to make your experience a good one. I can't recommend them enough.

Fudge is able to go without his boot most of the time now. If he's tired, he may drag his foot a little so we keep his fancy boots nearby. We're just so relieved that he has improved so much in such a short time. It was a scary experience for him and us.

That is one fancy looking boot! And your spin video from yesterday is great; it's nice to see you getting control of your bum foot so soon - much better than Dr. B predicted!

With loving people around, he will always have an ear scratcher! That is a neat boot, I have never thought much about dog boots I admit.

We're glad he's improved so much and so quickly. Good to know that there are products out there that can help.

We are so glad that Fudge is doing better. The way that you took care of Fudge's paws in ingenious

Fudge is an amazing boy!!! And we already know how amazing his mom is!!! That is one very nice boot.

These boots are made for walking . . .

Fudge, this is fabo news. So glad the boots are a hit. Keep on walking mate. Have a wonderful weekend.
No worries and love Stella and Rory

What fancy boots! Yours even has zipper, Fudge!

Thanks for the info, Sue - and Fudge, keep up the good work!!

That's pawesome! I had no idea they made such specialty doggy boots!

It's great to know there are some awesome products like that out there when we need them. It's even greater to know that Fudge is going without his boot now! :)

Wow. I'm almost speechless. I've not been checking blogs for awhile and I drop in just to catch up and see that you have had a horrendous time lately. I have never heard of that kind of stroke, but I am so glad Fudge is strong willed and not willing to settle for 'less' in his active life. Bless his heart anyway. So happy he is improving so much. Love his little spins. :-)

Take care of yourself, it sounds like you are running ragged with the gang right now.

Im thrilled he is doing so well. WOW. I think Porti's have so much spirit. His had to have helped him recover! Hooray

Hi Fudge, we're sorry that we're a little late in responding. My peeps were busy getting ready to list the house for sale and the open house. Well we've sold it and will be moving soon. We're very glad that you've made so much progress. I can't scratch my ears at all and so I rub them against my mattress pad. And my peeps help with that too. Best wishes ahead Fudge.

We are delighted Fudge is so thoroughly improved. I've pondered boots for the girls for winter, but thus far, we've managed without them.