It's here. This election campaign seemed to last forever, but today is the day. Go vote!!

I try to avoid politics on this blog, but today I'm making an exception. My Grandmother was born in 1902. Growing up she probably didn't expect to ever have the opportunity to vote. Women in this country finally got the vote in 1920 and my Grandmother got to cast her ballot as an adult. She and my Grandfather didn't agree on politics, but they did both agree that it was their responsibility to vote. They instilled that belief in their children and grandchildren, too. Very early every election day morning, my Grandfather would phone me and remind me to vote. I got in the habit of getting up and voting early so I could tell him that I'd already voted when he called. 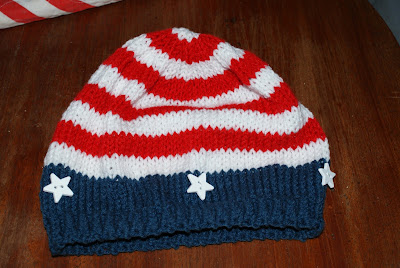 I've voted in every election since I've been eligible and this morning Rob and I voted. I have to admit that it was an emotional experience casting my vote for the first woman to run for President. I felt I was casting a vote for my Grandmother and Mother at the same time. 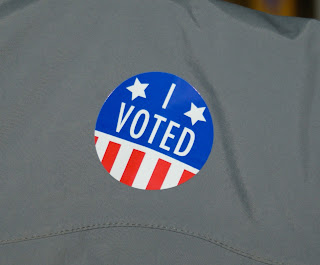 My Grandparents would be proud today, as their surviving daughter, two daughters-in-law and five granddaughters as well as a number of great children all got to make history by voting for a woman for the first time.

Today I wish I lived in Rochester, New York. That's the burial place of Susan B. Anthony. This is what her grave looked like last week. 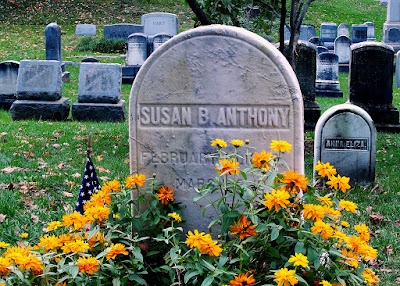 This is what it looks like today. I would love to be able to paste my voter sticker on her tomb. It's been a very long road to get here, but we won't go back. 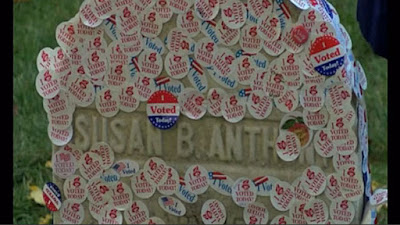 So many women fought for your right to vote, be sure to make them proud and vote today.
Posted by Sue at 2:18 PM

That is very cool

We came from a voting family, too! We usually forget all those brave women who fought for Women's rights.

#IVoted... I understand as a black woman American I Must #VOTE even absentee ballot when I'm overseas (too many Fought & Died for this right)! Did you make the Hat? Thanks for sharing the picture of Susan B Anthony headstone with all the I voted stickers WoW!

Mum votes too, but not in your elections. WISH SHE COULD... although bad enough in her own country as she can never ever over the last few years decide who to vote for because they all promise yet never deliver. Big HUM... Promise mum made years ago, never to get involved in poll e ticks on the net. Besides De Ark and I have special stuff for ticks.
Luvs yer guys and missed yer.
Luvs Freya Rose Blossom and De Ark XX