Sydney is a strange dog. You all know that she has some pretty severe mental problems that we've been dealing with for most of her life. She takes Prozac daily and since we cut her dose from 30 to 20mg, she's doing much better. She's found her appetite again and is getting along better with the other dogs, though they mostly avoid her. 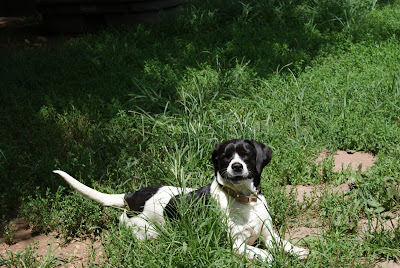 She just turned four years old, but still isn't reliably housetrained. She lives in the garage when she isn't outside or sleeping in her crate. The garage is easier to clean if she has an accident. It may sound mean to you, but Syd is actually much happier in the garage. She has a nest of blankets and her alligator toy. Being in close proximity to the other dogs in the house is too stressful for her and she attacks any that get too close. In the garage, she has her own place and nobody bothers her. The garage is heated and air conditioned, so she isn't cooking or freezing and it works for her.

Syd is part Beagle and part Dachshund and has become quite a good little hunter. She's gotten a couple squirrels, a mouse, a rabbit, a bird and about a dozen moles. Unfortunately, hunting moles means digging lots of holes, so that keeps Rob busy filling them in again. At Christmas last year we went to the thrift store and bought a bag of small stuffed toys for the dogs. There were a couple dozen toys, some bears and dogs and bunnies and some I didn't recognize. I think they may have been Pokeman characters. I've been doling them out gradually. As one gets chewed up, I'll put out another. Most of the dogs like carrying them around and it's really only Mackey who destroys them.

One of the toys was an alligator and Syd has carried it around for months. The other day I reached in the bag and pulled out a small brown fuzzy toy that I guess is supposed to be a dog or something. It doesn't have much shape and isn't very appealing, but the minute Syd saw it, it was love at first sight.

It's the same size as a mole and the first time I saw her carrying it, I thought she had a mole. I guess it must feel like a mole to her because she carries it everywhere, inside and out. We call it Holy Moley. 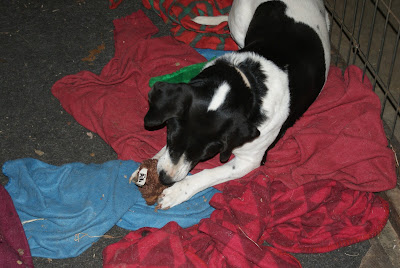 Sydney loves her Mole and whenever I walk into the garage to see her, she does a little happy dance with him in her mouth. I wonder if she'll continue to hunt moles if her best friend is one. Sure she will.
Posted by Sue at 2:16 PM

She definitely lives life to the beat of a different drum. It is great that she is allowed to, and be safe and loved.

We are sorry Sydney has those problems, but you have a very big heart to find a way to let her live and be happy in her own way. Wish we had a mole:)

Holy Moley, BOL!!! We're so glad that Syd found someone who will work with her challenges and accepts her for who she is.

We think we want to live in your garage. She is lucky to have you guys
Lily & Edward

Syd kind of reminds me of my brother Owen. Owen is usually okay but there's that 1% when he reacts to what the other kids are doing. Maybe it's a funny look that one of the kids shoots him or he senses something and reacts. We're glad that Syd has his own spot to call his own and it sounds just perfect. Heat and a/c and a big nest to burrow in. Toss in lots of love, stuffed mole creatures and a few Milk Bones and he's a happy pup.

Syd, you're lucky that your family is so accommodating! I'm driving my new family crazy!!

Sydney is a very lucky girl to have such a loving family!

It doesn't seem like 4 years already since Rob brought Syd and Mackey home. I'm glad that you've finally found a way to make her life happy. And with Holy Moley as her new best friend? Well, that looks like a pretty happy hound to me!

Glad to hear Miss Sydney is doing well on her meds... and loving her little alligator! It sure doesn't seem like it's been 4 years! Wow!