Fudge came home this afternoon. He's groggy and wobbly from the pain meds, but he's sleeping comfortably in the living room where I can keep an eye on him.

The great news is that there are no masses on his vital organs. Yeah!! That was my worst fear.

The less great news is that he has a disc problem in his back. It looks from the xrays as if we caught it pretty early and Dr B thinks he should make a good recovery. He's taking anti-inflammatory meds and pain pills and if he isn't feeling better in a couple days he'll get some muscle relaxants. We're hoping he won't need those. He'll need strict bed rest for a week. 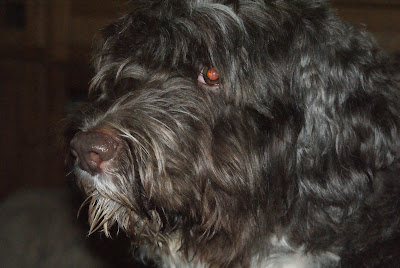 The boy has gained about 10 pounds in the last six months and as soon as he's feeling better, we'll do a thyroid test. The extra weight may be putting too much stress on his weak leg and his spine. It also may be putting pressure on his bladder as he's experiencing some leakage issues. If weight loss doesn't help, he'll need to take some hormones to fix the embarrassing problem.

It may sound like a lot of bad stuff is going on, but they're probably all related and controllable.

His birthday party has been delayed for a couple days till he feels more like himself. He should sleep better tonight. I know I'll wake up dozens of times to check on him, but that's what moms do.
Posted by Sue at 10:27 PM

Thank goodness there are no masses! We are sending you lots of positive vibes and AireZen, Fudge. We want you to enjoy your birthday pawty soon!

Beautiful sweet Fudge. I have fallen a little bit in love with you and your furry siblings over the last 4 years. Happy 12th birthday. Hope you are feeling better and back to the fun stuff soon. Love from Mel and Bronson xx

Well, that's not a lot of fun, is it? We know your Mom is going to work very hard to get everything under control - she does that very well. All paws crossed for you to be feeling much better soon, Fudge.

Glad it isn't drastic and can be maintained. But we want the diet to start AFTER the Sprinkles.

So happy there are no masses. I had to have surgery because of a disc problem Sending lots of positive vibes
Lily(& Edward)

Hooray for Fudge. Those pesky 10 extra pounds are probably part of his back problems. Well, I hope he's feeling up to birthday party cupcakes soon!