It was two years ago last month that Noah's eyes were a problem. He had a reaction to an antibiotic that left him squinting and rubbing his very goopy left eye. When Dr B tested it for dryness  we were hoping for a result of 12, but got only a six. That meant he needed treatment. 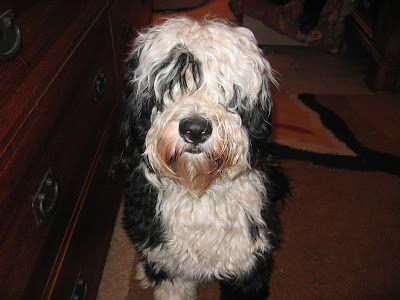 We tried several different drops, but he couldn't tolerate any of them. I was really worried that the boy would lose his vision in that eye. Finally we tried Optimune which is the canine version of Restasis. It worked for him. He tolerated it very well and his eye started to heal.

At first he needed the ointment twice a day in his eye. After about a year I carefully started cutting back to once a day. Then when he was still doing well, I cut back on the amount I was using. Still no problem. Then a couple months ago I started skipping Saturdays. Still no problem.

Then suddenly on Monday I noticed that his right eye was goopy. Oh no! On Tuesday when it was even worse, we went to visit Dr B. We were both afraid that the dry eye condition was now in both eyes. 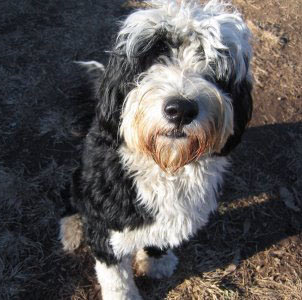 First he did a dryness test on the left eye. We were amazed at the reading...16!!! Twelve is considered normal. Noah's is perfect. With the help of the Optimune, he's producing tears. He'll need to continue the drug for his lifetime, but we know that it's working. The right eye only tested at 11, which isn't really bad. Dr B felt pretty sure that it was a minor infection and sent us home with some antibiotic drops to use for a week.

It hasn't been a week yet, but Noah has two happy looking eyes now. No goop, no squinting and no rubbing. I am so relieved that the dryness isn't a problem. Noah, Norma Jean, Tess and Sebastian all love to roll in the dirt in the back yard and I'm sure they occasionally get some in their eyes. Each has been treated for an eye infection at one time or another. We'll just watch them closely. 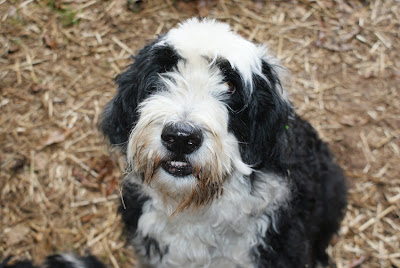 I know you're going to say, but you can't even see Noah's eyes. Well, Mom sees everything.
Posted by Sue at 2:46 PM

Oh my gosh, poor pup! I'm so glad you found something that works!

So glad you found a drop that will help. A drop a day to keep vision seems like a very small commitment!

Yay, Noah! We are so happy to hear that this medicine worked for you!

WooooHooooo!!!!!! I am soooooo happy that it isn't something serious! Ma knows abouts, 'you can't even SEE their eyes!' thing ~ Ma's Old English Sheepdog used to gets her eyes checked all the time, precisely BECAUSE you couldn't see her eyes! Moms can be sooooo 'pokey',huh? BOL I'm glads that she caught it and it is just some drops.
Sendin' healin' vibes and some margaritas ~ those always help! ☺
Kisses,
Ruby ♥

So glad he's back to happy eyes! Even if you have to keep up the drops, they WORK!

Noah! I has to get ointments and drops in my eye, too, but I has to wear a muzzle. I don't like getting mom-handled like that!!

Kids eh. Got to keep an eye on all of them. Hope that all is well down your way.