Did you ever have one of those weeks that started off so badly that by Wednesday you didn't want to even get out of bed? That's the week I'm having.

Yesterday we had to deal with the Cat problem. This morning we took Samba in to see Dr B. She seems to be feeling better after taking her meds for her tonsils, but she is still not letting me open her mouth and she chews on the left side only. There seems to be pain on the right. 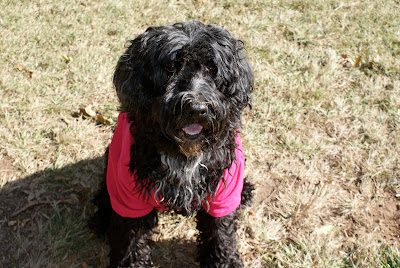 After an exam he suggested an x-ray of her jaw and a biopsy of the muscle. His feeling is that she may have Masticatory Muscle Myositis.

The x-ray showed no dislocation or abnormalities of the jaw. Good news.

Now the bad news. Inflamed, swollen tonsils are one of the symptoms of MMM. She had that. A week ago they could open her mouth fully, now only two thirds of the way. The natural progression of the disease would make her unable to open her mouth at all. 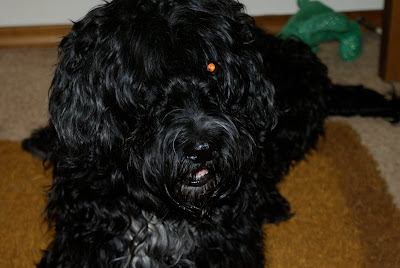 While we wait for the lab results, we're starting her on treatment. Large doses of Prednisone daily tapering off over a six month period, soft food and until the pain is under control, no chewing. After the pain is managed, we'll start her on physical therapy, holding a soft toy and eventually chewing a soft toy with supervision.

The disease is not necessarily life threatening as long as she has treatment. It could progress to where she can only eat liquids, but we're hoping for remission and that she can lead a fairly normal life.
Posted by Sue at 5:50 PM

Tell Samba that at least Dr. B and I got to learn something today from her. Neither of us knew inflammed tonsils could be a sign of this. And tell her I can't open my mouth all the way yet either so we're in this together for a bit. Hope she feels better soon.

We're sending our best miracle whippet wishes your way. And thoughts of comfort and warmth, too.

wags from the whippets

OMG! Sue, when it rains it pours!
I've never heard if MMM. Is it something common to Porties?
We will share our healing karma that our friends are sending us.
{{{{HUGS}}}}}

I am so sorry for this awful news. Hoping the lab tests come back negative and this whole thing disappears soon. If not, Samba's in the best possible hands with you to care for her.

I thought of you today while hanging out with the Portis in my agility class. They are so lovable in their own way.

omg i am so sad for her and for you. and praying for a full recovery.

We are sending you lots of AireZen, Samba! We hope you feel better soon!

I am so sorry to hear about Samba. Milo and I send all our good thoughts to you all.

Sissy slings healing drool, and Gretchen would volunteer to come lick Samba senseless, but you already have a licker in your pack... The Knight and I will just hold you in our thoughts and send healing vibes!

May the rest of the week be kinder to you.

This has been a hard week for you - we're sending lots of love and healing vibes your way.

I missed this somehow, but you know another little dog has been diagnosed with Eosinophilic Myositis. This is Eduardo the Snuggle Puggle at http://eduardothesnugglepuggle.blogspot.com/

This sounds very similar but you should take a look at his blog. I am hoping Samba's diagnosis is not so serious, but my thoughts and prayers are with you all.

Cheers and hugs,
Stella and her Mom

I hope the vets can quickly figure out what exactly is the problem so that they can get Samba on the road to recovery. Samba will be in my thoughts and prayers.

Every critter here (two-legged AND four-legged) is sending healing vibes your way. Samba is so lucky to have you.

Hugs to you and Samba... keep us posted on the diagnosis and treatment... sending loads of good, healing vibes your way!

Stella beat us to it - we were going to tell you to go visit Eduardo's blog - http://eduardothesnugglepuggle.blogspot.com/2009/11/disease-and-my-snuggle-puggle.html- sounds like the same thing. We sure hope you can get this under control for Samba, sounds very painful.