Sometimes being an adult and making responsible decisions stinks. Today was one of those days. 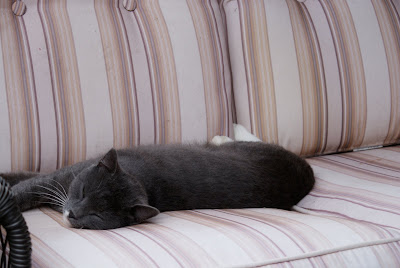 This guy has roamed our neighborhood for years. No one has claimed him and no one seems to know where he came from. The best guess is a family that moved away a number of years ago and had lots of cats. They probably left him behind.

He has terrorized the neighborhood cats for years, fighting with them and stealing their food whenever possible. He's killed birds and squirrels and other small creatures. Whenever anyone gets near him, he runs. If he can't run, he hisses and swipes at people and dogs. My dogs have learned to stay far away from him.

In the last couple weeks Cat, as we call him, has adopted our porch as his major residence. We knew he'd been spending nights here for some time, but lately he's been staying all day and doesn't run when we approach him. Last week he didn't run from Samba or Morgan. He didn't hiss at them or try to claw them. It worried me.

This morning we trapped Cat and took him to see Dr B. Because of the personality change, I was afraid he might be sick. I was right. He tested positive for Feline Immunodeficiency Virus. He was a very sick kitty and was highly contagious to all the other cats in the neighborhood.

Rob and I made the decision to have him put down and cremated. It's a terrible decision. We shouldn't have had to make it, but whoever was responsible for Cat didn't live up to their responsibility and someone had to. We're sorry, Cat.
Posted by Sue at 3:51 PM

That's terrible that it was you that had to make that decision. Do you think he was a stray or was he actually owned by an irresponsible person?

I think you made the right decision to put him down, from what I've read many cats don't survive FIV.

I hope he didn't spread it to the other neighborhood cats!

Sue, don't be sorry. Even though cats can live with FIV, it would have eventually taken a toll on his health. you spared him and the neighborhood cats potential suffering, and kept your family safe.

It is so sad that he had no humans who could have prevented it. You did more than most would have.

What a hard choice, but one done with so much heart. Not the easiest, but thank you for caring so much to help poor Cat. No animal should be abandoned or suffer alone. I'm glad you were chosen, as cat's choose there people, people don't choose their cats they say!

What a tough decision for you and what a shame that his hoomans abandoned him! Poor Cat.

Poor Cat, y'all did the best thing for him. Now the neighborhood kitties are safer, and he is not suffering. Well, he knew where to go for help.
Sally Ann

a terrible decision to have to make, but a blessing for this poor cat. don't be sad, you did the best you could for him.

Sue this was such a good thing that you and Rob did. You were very perceptive to see that he was sick and I like the idea others have expressed that Cat knew you would help him.

All around a good thing.

I'm so sorry you had to make this very tough decision, but you really didn't have a choice. It was the best thing for Cat, and I firmly believe he chose your house because he knew you would care for him, even to the point of allowing him to leave this earth with dignity and no suffering.

Hell am I sorry to hear that you were forced in to that situation. You should be proud of yourselves for taking him out of his misery and preventing others from experiencing the same.

YOu did a wonderful thing. Sorry you had to be the protector. This poor suffering kitty seemed to come to YOU to help him.

Don't beat yourself up, you did what was right by the cat and by all the other cats. It hurts, but at least you cared enough to have him checked out.

RILEY AND STAR MY MALTESEKIDS said...

We think it was very kind of you to take Cat to the Vet. And the kindest thing, was what you had to do so he wouldn't have to suffer anymore or cause other cats to get sick as well.

Thanks for caring when others don't.

Oh Sue, I'm sorry you had to make that decision for Cat. But cat is lucky to have found you and a nice place to spend the end of his days. Doesn't make it any easier - though, does it?

thanks you for being responsible when others aren't. g

So sorry you were placed in that awful position, but you certainly did the right thing. Both for cat and the neighborhood. I have never understood how some people can be so callous regarding their pets. Hardest thing I do in life is live in a world where there is cruelty and neglect to animals. You did the right thing.

You did the right thing and have saved all the other neighborhood cats in the process. Cat was very sick and putting him down was for the best. Whenever my mom gets sad about hearing sick pets get put down she reminds herself that cats and dogs don't understand death, they only understand the end of pain and suffering.

It's terrible that this all could have been prevented if Cat's previous owners had cared enough to not abandon him to the hard life of a stray.

I'm so sorry you had to make that decision, but Cat obviously knew where he'd be able to rest in peace, in every sense of the words. Thank you for your kind, tender hearts, and for protecting the other cats in the neighborhood too.

It is not good is it Sue when some of us are left with decisions like this. It was the best thing to do, this was someone elses doing. Julie.C

Poor Cat. I thought for sure he would become friends with Tsar.

You made the right decision even if it was hard.

Sue, I'm sorry you had to accept the guilt of having to put Cat down. We always feel guilty for such decisions even when it's the right thing to do.
You did provide a bit of a safe haven for him and tried to provide something of a home; far less than his irresponsible owners.
In the end you had to do what was best for your pack and for Cat, too. CIV is a bad disease with an ugly death. You did Cat a favor.
{{{{HUGGS}}}} to you and Rob.

So sorry you had to make that decision and take on the responsiblity... but it is more than clear that Cat knew what he was doing when he picked YOU... he knew he could get the comfort he needed and be able to rest in peace... Thank you.

He was a nice boy and seemed so healthy other than the FIV. It was pretty sad but unfortunately the right thing.

Sue - this story really touched me. It is clear that you are not only an animal lover - but such a responsible caring animal lover at that. Bravo for making a very hard decision. I'm sure Cat really appreciated that you cared enough to notice him.