For the last several years of her life, Rob's mother lived in a nursing home. He visited her several times a week and he sometimes took Lucy along with him. Lucy was glad to go and visit with the
residents and the nursing staff, and most of them were happy to see her.

There were several residents who would come wheeling themselves out into the corridor in their wheelchairs as soon as they realized that Lucy was there.

Lucy was a small dog and sometimes Rob would lift her onto a bed so she could visit with her fans. She would cuddle next to them or lick a hand. She would stand up beside a wheelchair for petting. She brought smiles to lots of faces and we heard stories about their dogs, some of which had to be given up when they moved to the nursing home. 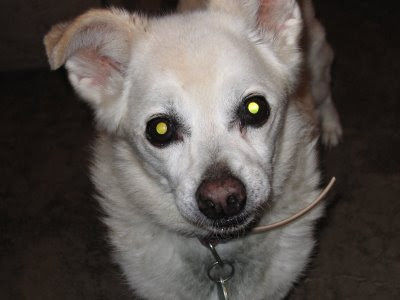 Lucy was not a therapy dog or a service dog. She was simply a visitor. She went to say hello to her friends and bring them some happiness.

Rob has continued to make several trips a year to visit the nursing home. He likes to chat with the staff and although few of the residents are the same, he likes to walk down the hall and chat with whoever wants to chat. Lucy went with him until her death in August of 2008. Since then he's gone alone. 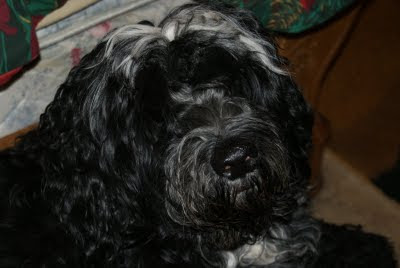 Last night Rob wanted to wish those at the nursing home a happy Thanksgiving and he selected Sky to go with him. Sky is quiet and gentle, doesn't jump on people and obeys pretty well. This was his first nursing home visit and I was a little worried about how he would react.

Again, Sky is not a therapy dog, he is a visitor.

Although he was a little shy at first, Sky was not afraid of wheelchairs or walkers and was willing to sit and let people talk to him and eventually to pet him. He did very well on his first trip and will probably visit often. The best part for him was the kind nurse who gave him a whole piece of apple cake. That's enough to make this big boy think well of the experience.
Posted by Sue at 2:02 PM

Go Sky!! That's awesome. I'm sure he brought some joy to those who met him.

We have a lot of dogs visit us in our nursing home. None of the are trained therapy dogs but all help residents by their visits. It is lovely to see them, many of them know their way round and we get to know their personalities.

What a great story. Dogs can bring such joy to those people who don't have much in their lives.

Hello All This comment is being posted on Sue"s computer by her better half. Please excuse the typing. I don{t have my glasses on and cannot find the apostrophe.

Several time in the past year and some that Sue has been at this, she has made a grown man cry. I saw the picture of Lucy and thought about our visits to the nursing home and broke down before the next sentence. We have had our Thanks Giving dinner and the triptophan has moderated my emotions so I could finish reading the entry. Sue makes me very proud that I have such a sensitive and talented wife. Not everyone can capture a sense of feeling in words and make them live.

We have had our ups and downs and although she is very sick today she still soldiered through a Thanks Giving diner for me when I am sure she felt like being under the covers with her eyes closed. Thank you Sue for all you do and for all that you mean to me. You are my heart and my love. You have been my sanity when I go off the deep end, my comfort when I have been bruised, and my light through all kinds of adventures. I only wish I had met you sooner. Love Robert

This is Robert One More Time.

Please look at Dogs and More. Sue is doing a great job of getting people in the spirit of Dogie Holiday Time.

I rescued Lucy from an abusive situation and she repaid me every day of her little life.

So wonderful Lucy and Sky giving some joy to those people.
Happy Thanksgiving guys!
xoxo
Thor

What a wonderful thing you do for the residents. (I also loved your story about Bessie. I hope her new home fits).

Yea Sky! Good for you for being such a good boy! Hope you get to go back soon. g

Their is a wonderful bond between dogs and humans.
I have seen humans respond to a dog with warmth and kindness who have been unresponsive to humans!
Sky is picking up an important piece of work there - he will never know how much good he is doing.
As you say it doesn't have to be a therapy dog - a warm furry cold nosed dog brings out something in people that gets lost sometimes.
You go Sky - spread some doggy wagginess right round that nursing home.
xxxxx

Good boy, Sky, that was a wonderful thing to do! We hope you get to go for many more visits - we bet you put smiles on a lot of those faces.

We had to come back after reading Rob's comments. We sure hope Sue is feeling better and you two make one awesome couple.

What a sweet story. I hope Sky gets to go back and visit his new friends.

What a nice story. Rob is a wonderful man.

Zodiac does pet therapy at the peds floor at Cox once a month. We love it.

You got a whole piece of cake all to yourself, Sky? Good for you and we just know you made a lot of seniors smile!

We think it is so very admirable that you do this. Most everyone loves to see a friendly dog