I used to love to bake. I made cakes and brownies from scratch. I made pies and bread and my favorites were fussy Danish pastries and bear claws. Then I developed carpal tunnel syndrome in both hands , followed by a couple of wrist fractures and tendonitis. That put an end to kneading dough. 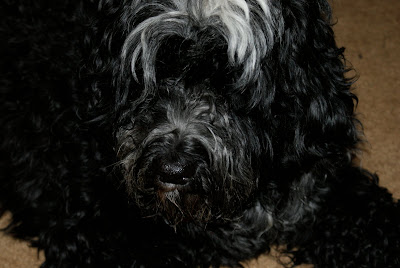 My solution was to buy a bread machine. It does the hard work for me, but I can still be creative. When we were first married I made all our bread. Once we moved here I guess I got lazy. Rob's schedule was rough for many years. He was gone for days at a time and I was here with just the dogs for company. I stopped baking.

Yesterday I woke up with the urge to bake. Sky was my constant companion during my time in the kitchen, though the others weren't far away. 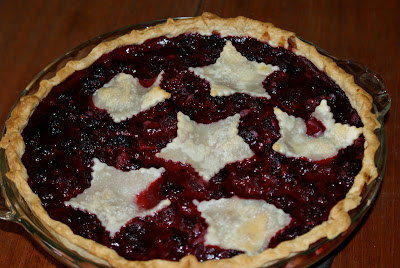 I've been so very hungry for raspberry pie lately. We used to buy baskets of raspberries when I lived in New York. We could bake with them and still have plenty to eat as is. Here we can only find tiny boxes, 1/8 of a pint and they are extremely expensive. Last week I actually called several restaurants in the area to see if any of them had raspberry pie on the menu. None did. I finally resorted to using frozen berries. They didn't smell as nice, but I'm sure they'll taste just as good. 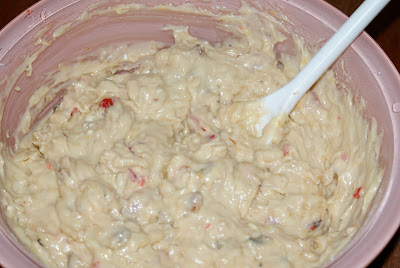 While the pie was in the oven I started making some bread. This is a quick bread, no yeast involved. I wanted something fruity and light, so I made what I call Hawaiian bread. I used a basic recipe and made additions as I went along. 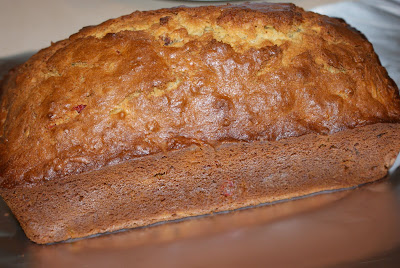 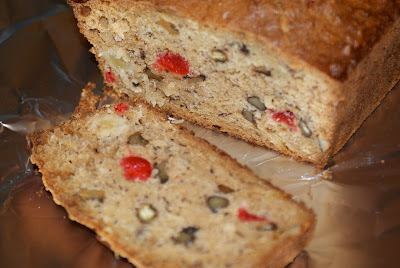 It has bananas, pineapple, cherries, coconut and walnuts. I would have used macadamia nuts, but I didn't have any in the house. The smell while it was cooking was heavenly and the smell when sliced is almost too good to eat. It tastes just as good as it looks. 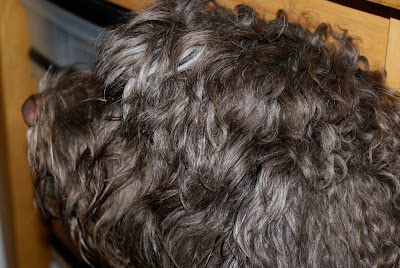 Fudge watched the bread for me, but when I had to leave the house for an appointment, both the bread and the pie went up on a high shelf. No sense putting too much temptation in their way.

If anyone would like the bread recipe, e-mail me and I'll send it to you.
Posted by Sue at 11:04 AM

that looks lovely. There were flats of raspberries and loganberries available at our local farmers market. I can't believe you can't get them.

That looks like a pretty delicious pie :) Just lookit Fudge's face.. hehhehee.. temptations :p i am sure he is still watching the bread :) Have a wonderful Wednesday Sue.

Now you have made me very hungry! I would love to have the recipe Sue. It looks so delicious.
x

mmmmmmmmm I could almost smell it through the computer...might of stirred my baking mojo!

I would LOVE the bread recipe, even though I'll likely leave the cherries out...

The pie is pretty! I love making shapes to decorate the top.

A bread machine is something the Momster has on her wish list - one of these days. Your Hawaiian bread looks wonderful. And she says she understands about the small quantity and high price on raspberries.

Hope you pups score a piece of the crust at least.

Beautiful bread; I'm glad you found a way to make raspberry pie. I'll be posting a super-simple cake for you soon, so you don't have to knead or stir.

Blog Mom says she would love the bread recipe. This is kind of amazing because she barely even cooks dinner anymore, but she thinks that looks like the best thing ever and she never saw anything like it before. Thanks so much for offering.

OMD--your baked goods look most delish~!!!! :D
ahhhhh that darn temptation does get the best of me sometimes and i don't know what to do--if only i were great dane. heeeee. :P

The bread looks delish and I would love the recipe too. Don't know when I would make it, but a holiday would be a lovely time. Or even make mini loaves for little gifts.

Can I just say yum? And nice helpers!

Looks delicious! SHE doesn't bake much, because she'll eat it! That's the point, isn't it? So She takes it to other people. WE never get any. Hope the pups got something.

That looks so delicious!! I used to bake years ago but don't anymore. Mostly because of the same problems you have...it sure makes it hard. A bread machine sounds like a great idea! I've looked at the grocery store at the blackberries and rasberries...the cost is so high. I also heard a man at my mechanic's office talking about how the heat and no rain had killed all of his. Fudge looks like he would love some too!! Lots of love, Debbie and Holly

They look delicious!
My mom used to bake pies, cookies, cakes and all kind of desserts but nowadays all my family is on a diet... a never ending diet!
Happy Wednesday to all of you!
Kisses and hugs
Lorenza

now we are starving!!
Benny & Lily

i want the pie! i love raspberries and that pie looks ultra yummy!!!!!

You have mom drooling all over the keyboard! We need you at the barn raising, Miss Sue!
Mom would love to have your bread recipe!

So delicious! We just want to bite our screen!

Your pie and bread look delicious! Sydney likes to be close by when we're in the kitchen. She's always available for a taste test.

We have a bread maker, but have never gotten good bread from it. I used to get all the raspberries I wanted from my grandpa's garden. When I found out how much they cost in the store is when I decided to grow my own. I now know why they cost so much-slow to grow and produce! Blackberries were much easier, but less tasty.