My dogs and I have a daily routine. There are certain times when they eat and each knows exactly where to stand to eat. I feed them in the same order and the same  place every day. We go outside at set times each day. Some trips outside are quick outings for them to relieve themselves and come right back to the house. Other times are play times when they can either find things to do on their own or Rob and I organize games for them. The have bedtime routines, too. First they have their yogurt, then they go out, then they get their cookies and go to bed.

I think routines are good for them. They know what to expect and what's expected of them. 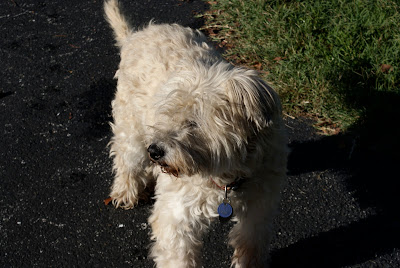 Morgan is now in a situation because of her knee injury,where her regular routines are disrupted and she must learn new ones, and Morgan is angry.

The first two days went along pretty smoothly because Morgan was in pain and scared and so she just did whatever we told her to do. But, on Sunday morning Morgan woke up angry and let me know right away. Because she can't do stairs, I fed her in the living room while Rob took the others to the garage for their usual morning routine. I offered Morgan her bowl of kibble, but instead of eating it, she pushed the pieces around in the bowl, then just looked at me defiantly. When I told her to stop pushing the pieces around and eat them, she flipped the bowl over with her nose sending kibble all over the place. 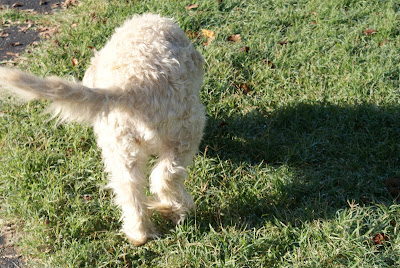 Next I told her to come to the front door so I could help her into the yard. Instead, she made a quick three legged run for the stairs to go to the garage with the others. I grabbed her and carried her into the front yard. All day she tried to get around the new rules and go along with the rest of the pack. Rob finally  got her to eat using the power of cheese as an incentive.

Today has been much the same. Morgan must now unlearn her old routines and accept new ones. Eventually she will accept the inevitable, but for now she's angry and wants everyone to know it. 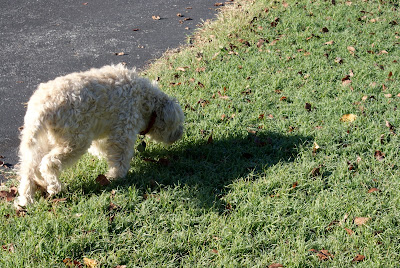 Morgan and I are old dogs. Neither of us like change. We like our old safe, comfortable routines. Change is stressful and makes us irritable. We're both fighting this change and we'll both have to accept it. 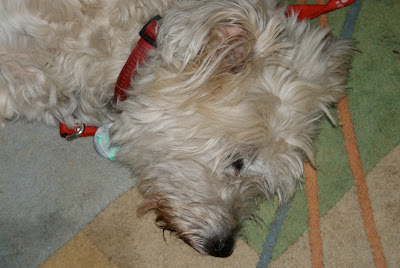 Its not always illness that does it either. Stella always goes pee out the back door. So last winter our back door was snowed shut and we could only go out the side door. But, no, she didn't go that way, we have to go the back door, lets try it again. We finally got her ready to go the side way and she went, but she wasn't one bit happy about it!

There is something to be said for Old Dogs!!!! Hope Morgan feels better soon!! xoxo Chloe and LadyBug

Cheese--the miracle cure. We are all in routines and we don't like to change either; so we understand Morgan.

Not an easy thing to change habits forged over years. I love the flipping over of the bowl. Is that a statement or what?

Heh. Both boy dogs and Sissy did/do the tantrum thing with food. I hope she comes to understand this is all being done with love, for her benefit!

We feel the same way that you do, Morgan - routine is a very good thing and we don't roll with change that easily either, especially me, Miss Maggie!

Oh Mowgan
We undewstand you. My Mommi hates change too
it can be so scawy, but you'we wif youw loving family and I know this will become a new wootine pwetty soon and you won't have to be angwy anymowe
smoochie kisses
ASTA

Oh Morgan - I'm sorry you're angry. I know how upsetting change can be. I hope you learn to adapt soon. g

Morgan and I are old dogs. Neither of us like change. We like our old safe, comfortable routines. Change is stressful and makes us irritable. We're both fighting this change and we'll both have to accept it.

Sigh0 that's how I feel too Morgan and Sue!!!