What a difference a week can make. Last Friday I was considering taking Tsar on his last ride to the vet's office. Saturday he started on Prednisone and we saw some immediate improvement. Each day this week has been better than the one before, but he still has some serious problems. His front legs, especially the left, are weak and don't always go where he wants them to go. But the thing that has been driving me crazy this week is trying to get him to eat.

Tsar has never been a good, eager eater, but I really think he needs to get some nourishment into his body and it's been a struggle. As I've mentioned before, he refuses to put his head into a bowl of any kind. Many of you suggested a clear baking dish and I thought that was a great idea, but Tsar didn't. I presented his dinner in a clear pan on Wednesday and he walked over to look at it, then walked away.

Yesterday morning while I fed the Water Dogs in the garage, Rob prepared Morgan and Tsar's breakfast. Morgan gets her prescription ID in her bowl with a little Mighty Dog pulled chicken on top. The ID is for her joints, specifically her injured knee and the chicken is because she likes it. So there! 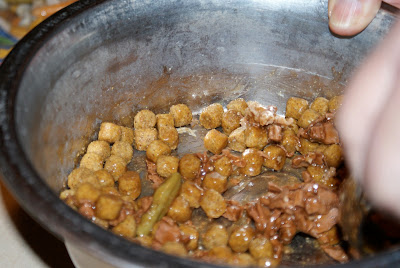 Rob put Tsar's kibble on a plate and covered it with soup. Then he put the whole mess in the microwave for a minute. Tsar doesn't like cold food. The kibble soaked up enough of the soup so it didn't pour off the edge of the plate. 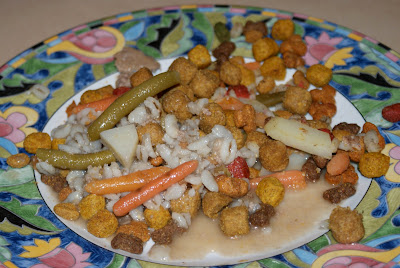 He set it on the floor without a word. 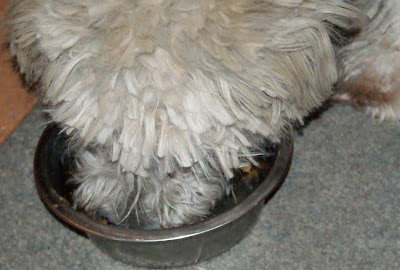 Tsar came over to look at it and ate the entire thing and licked the plate clean. 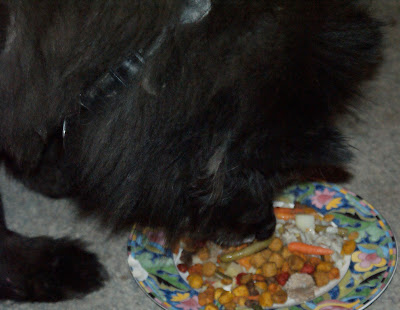 We repeated this in the afternoon with the same results. Once more in the evening and again he ate it.

This morning after finishing his breakfast, served on a plate, he went into the back yard and barked at squirrels. When he came in, he asked for and ate a dog biscuit. He's feeling better and now that he's eating, I'm feeling better. 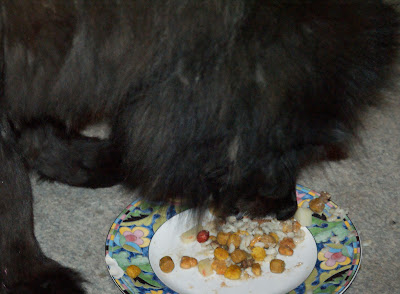 I have no idea why he won't eat out of anything with sides, but I suspect that his illness has left him with a vision problem of some sort. We'll mention it to Dr B next week and give him something to ponder.
Posted by Sue at 2:31 PM

We are so pleased to read that Tsar has got his appetite back.

Whatever it takes, right!! So glad the boy is eating :-)

Yay!!! That makes me so very happy. Keep up the good eating, Tsar.

Mugsy wouldn't eat not-warm food in his advanced years. They're such distinct individuals, aren't they?

Who cares what kind of dish he demands, as long as Tsar eats! Good boy!

My Maggie wanted fancy dishes to eat out of too! Whatever it takes to get you to eat, right, Tsar!

Oh, wonderful news to hear that Tsar is heading in the right direction Sue!
Hope you all have a great weekend,
Susan x

This sure makes us smile the biggest smile we can.

Yah, whatever it takes....fancy plate, warm food, gravy! Stanzie gets fussy sometimes...we sprinkle cheese on top and meat and make a big presentation. That dog knows how to work it :D

Hooray for our boy, Tsar, and for Rob too, for figuring out the combination!

Let everyday be better than the previous and all those Powerful Paws at work!

Big snowstorm supposed to be coming our way tomorrow and/or Sunday. We may get some serious snow yet!

Happy to see Tsar is moving in the right direction, eating and engaging in his favorite activities. Hope he continues to improve more every day.

Wonderful progress! Tsar is back on squirrel patrol! You must be so happy.

I agree with you and the others, whatever it takes, and I'm so glad that you found that much needed solution!! I've thought of Tsar through the week, and am glad that he's doing well--I hope you are too!

Parmesan cheese does lure a lot of my pet sitting clients to their food but it may not work with Tsar.
I love that you tried so many ways to get Tsar to eat! It does take a lot of research and time but the results are so worthwhile!
I hope Tsar feels better soon!

We are going thru a phase with Monty not wanting to eat - and our boys is pretty slim to start with. I will try a plate tonight - thanks for the idea.

That is great news about Tsar and his eating. Like Rottrover says, whatever it takes, that's ok. Good boy Tsar. Hugs to you buddy. No worries, and love, Stella and Rory

The things we do for our old dogs, eh? Charlie lost his appetite after his bout with vestibular disease, so I've been giving him anything he wants (within reason). Glad to hear that Tsar is eating, and that you've hit on the right formula and the right presentation!

so glad Tsar is eating...gosh, it so worrisome when our 'kids' aren't up to par!