Hi Everybody.
I'm trying to respond to everyone who has emailed us about Tsar, but it may take some time to get to everyone. We've gotten lots of messages and I've been spending most of my time with him, so I know you'll all understand. He's my top priority just now. I do want to keep you up to date on his condition, so here's what's happening. 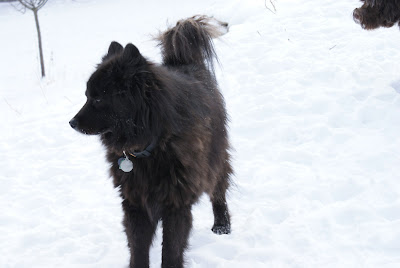 Thursday was not a good day. He ate a little chicken in the morning, but it was clear that he was getting sicker and weaker as the day went on. On Friday he refused to eat at all and couldn't stand up without help. He barely lifted his head and his eyes were obviously not focusing. When he did manage to get up, he was wobbly and lost his balance easily. By mid day he had developed diarrhia and had a couple accidents in the house. He was very upset about that. Tsar being part cat likes to be clean and never messes in the house. We were at the point where I would ordinarily have him put down, but I wanted to give him a chance with the steroids, so we waited. I did call the vet and ask if I could start him on the steroids a day early, but he advised me to wait till today.

This morning Rob took him out at 7AM and as soon as they came in I gave him his first prednisone tablet, 20 mg. At 9AM I offered him some chicken and he ate a whole breast. Rob and I had to go out (to buy more chicken) and when we came back about noon, Tsar met us at the door. He was standing and holding his head normally. Rob offered him some chicken and he ate another whole breast. Then he accepted and ate a dog biscuit. He's still wobbly, partly because it's been so long since he's eaten normally, but he's moving around and his eyes look much more clear.

I called the vet to be sure I'm not just seeing what I want to see and he assured me that it can work that fast. We discussed the fact that if it's a tumor in the brain, we'll see temporary improvement, then he'll crash again, but if it's something else, it can respond well to the prednisone. He was pleased with the progress.

Tsar will get another 20mg tablet this evening and we'll continue to encourage him to eat. For now things are better, but we're not out of the woods. Thanks to all of you for your encouragement and caring. You can't begin to know how much it means to us.
Posted by Sue at 2:17 PM

Thanks for such a good letter about our boy. My hope is that it is something curable (or like Samba, fixable) and just that he is able to walk, eat and get around for the now makes me feel better. I know you will keep Tsar's Fan Club up to date and we are grateful for that.

Awesome news. We hope it is a long term fix. Is there any chance that some of the problem was a reaction to some of the meds he was on?

This is great news! We will continue to keep our paws crossed for Tsar!

Great news! Keep us posted and we will keep all of you in our prayers!

My paws remain crossed for you, Tsar! Keep eating, buddy!

You must have been overjoyed to see him greet you so happy and alert. I know it was hard to get through those days of him getting sicker. Glad the drugs are helping. Go Tsar.

All our feets are crossed for you Tsar
Benny & Lily

I was thinking about Tsar today and am glad to read the positive news! He is certainly showing the inner strength that he has, and his determination! We're keeping you all in our prayers that this continues!!

Tears of joy right now. Sissy and Gretchen can't eat chicken, so Tsar can have ALL of theirs. I'm not much on it either...

Sissy has been slinging drool and Gretchen is sleeping with her paws crossed. I'm praying and sending good vibes.

We're getting snow tonight and tomorrow, so the Knight says that's a sign that things are going Tsar's way.

I'm so glad that you're seeing Tsar bounce back so quickly. We will keep sending Tsar healing thoughts.

So happy to hear that Tsar is doing better. Prednisone is a wonderful thing! It's helped a couple of our cats through difficult times!

Best wishes or Tsar and of course you as well; I know how hard it is.
Glad he is doing better and hope it continues.

Paws and hands in prayers for Tsar to continue on the road of recovery.

He is so very special.

Glad he had a good day. Kendra was like that. Every day we asked is today the day. She'd be very sick then rally and sick again.

As long as the boy is greeting you at the door and eating chicken..it's good news.

Still have our paws crossed.

We are so relieved to hear this news and hope that the good news continues. Hope that the prednisone continues to work well and that Tsar improves. Our prayers are with you all.

As long as he's eating.. its great news. Prednisone did help Dom when he was really sick last year. Everyday that i have with him is a blessing for me. I hope Tsar gets better soon. We'll keep him tightly in our thoughts and prayers.
*HUGS*

This is a very hard time for you. I remember the roller coaster in August. I love Tsar and have fingers and toes crossed for the best.

We're so happy to read that Tsar is doing better. We're keeping our paws tightly crossed and saying our prayers for his recovery. Thanks so much for taking the time to update us.

Tsar, keep on getting better buddy. We hope this medication works for him for ever and ever. Sending smoochies and hugs to Tsar and everyone else in the family too. No worries (especially for Tsar) and love, Stella and Rory

I am so glad to hear that Tsar is responding well to Prednisone. All brits and people here are keeping him (and the rest of you, too, of course!) in our prayers and sending healing thoughts. Hugs to all from all of us.