It's been an interesting  couple of weeks. When Sebastian turned up at our door, he was much too thin, covered in burrs, tired and confused. First we tried to find his family, but had no success. Next we left him with Dr B to have a checkup, vaccines, be neutered and have a microchip implanted. When we brought him home on Monday afternoon he walked into his crate in the garage, curled up and slept. For the next four days he ate, walked outside on leash and slept. We introduced him to the other dogs, keeping him leashed at all times. 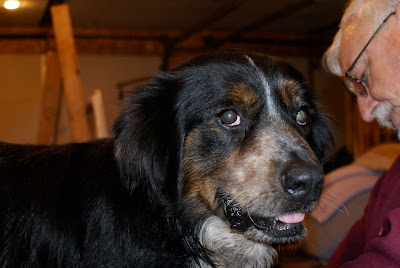 Saturday morning things changed. I took him outside around 6 AM but he refused to go back into his crate. I tried to coax him, but his answer was "NO". He and I sat together on the porch for an hour till the rest of the household woke up, then Rob and I discussed our plan. We fed him with Morgan, who he already knew, then walked them together. Then we took him into the house. All day Saturday he stayed in the house on leash. Either Rob or I always held his leash so he couldn't make any sudden moves. 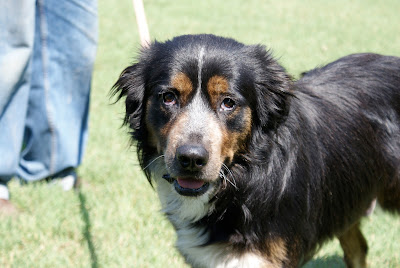 We learned that Sebastian has a couple phobias. He's afraid of certain noises such as fireworks, thunder and any snapping sound. He also was afraid to walk on the tile floors because his feet slipped. Saturday night we left him alone in the living room when we and the other dogs went to bed. The living room is carpeted, but the rooms around it are tiled so he was stuck in the one room. I got up a couple times to check on him and he was asleep in the same spot in front of my chair. 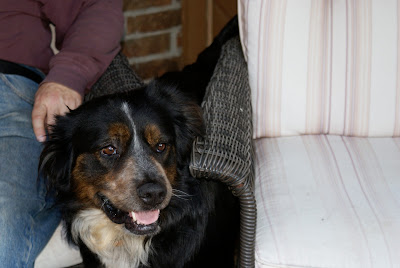 Sunday we took him into the back yard and let him off leash. He wandered around a little, but mainly watched the other dogs. We kept him leashed in the house again till the afternoon, then unleashed him. He stayed close to Rob and me. There were two little growly events between him and Fudge, but they were both reprimanded quickly and leashed again for a few minutes. Sunday night he again slept by himself in the living room. 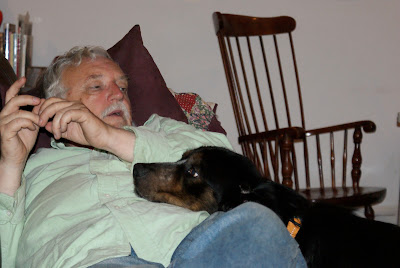 Monday we rubbed Paw Wax on his foot pads. It's a substance used with show dogs to keep them from slipping in the show ring. I had some because Bentley had also been afraid of slippery floors.  He started testing the tile floors and discovered that he didn't slip. He came into the kitchen at breakfast and got a piece of peanut butter toast. What a neat surprise that was. I guess he'd never tasted peanut butter before. Monday night at bedtime Sebastian carefully walked up the stairs to the bedroom and I showed him an unused dog bed. He slept there all night. 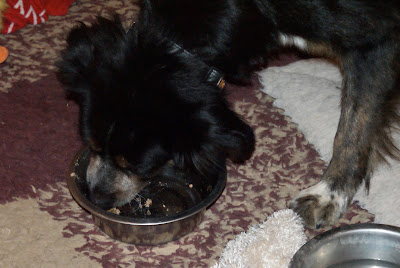 Tuesday after he and Morgan ate breakfast together, he joined the others in the back yard. Then he sat by my chair waiting for his toast. At dinner time he decided that he would join the other dogs in the garage. This was the first time he'd attempted the stairs and he ran right along with the others. That night he again slept on his bed in our room. 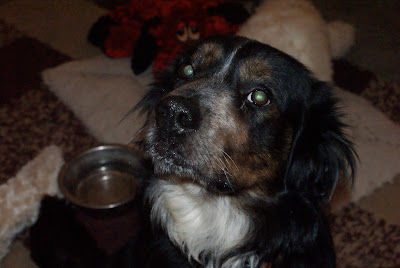 Wednesday he watched and tried whatever the others were doing. At the 7PM outing he and the four girls ran zoomies together around the yard. At bedtime he chose to go to the garage with the others for yogurt leaving Morgan to eat hers upstairs with Rob. At bedtime he charged up to the bedroom and instead of sleeping on the dog bed, he claimed the easy chair. 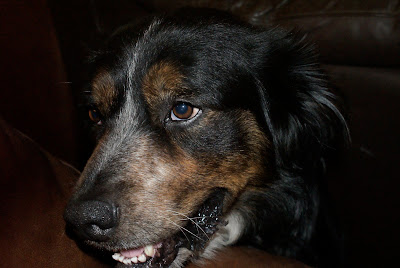 There have been no aggression issues, he watches the others, then tries whatever he sees them doing and he's very smart. Show him something once and he's got it. He already recognizes his new name and has learned 'sit'. We're working on 'down' now. He walks nicely on leash with no pulling and there hasn't been a single accident in the house. 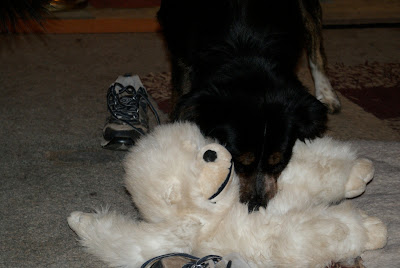 When he first came he seemed very sad. He watched the street as if looking for his family, but now he seems happy being part of the pack and is fitting right in. It's amazing what some rest, good food and  love can do for a dog. 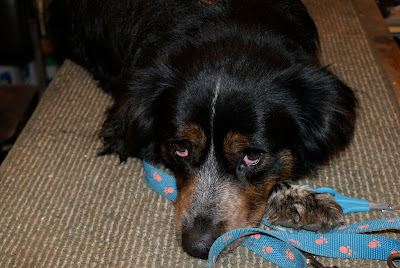 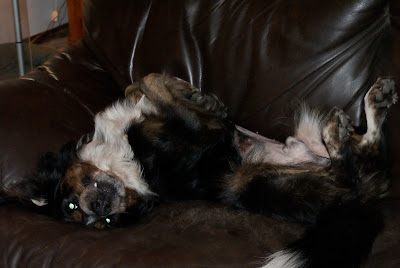 He's a wonderful boy who loves being part of a family. Whoever lost him and didn't bother to look for him should be ashamed. 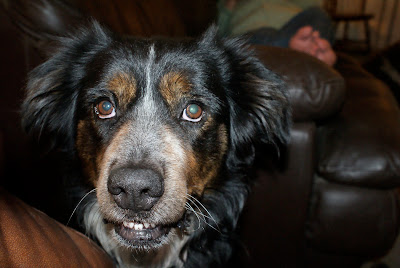 He must love being part of a pack. We live in an area where people dump unwanted dogs. I wonder if that happened to him...Pretty spectacular timing, though:-)

I loved this story you wrote and read it twice. Its just heart warming, lesson giving, and charming. Now that he watches the dogs to learn the ropes is just excellent.

Sebastian is gorgeous! What breed/s is he? Setter and ?

Thanks for another happy ending and Tsar, thanks for sending him.

This is a wonderful story! I'm so happy that Sebastian found you. He must be really smart to be finding a way to fit in with the others.

Who ever lost him has done him a very big favor. Well done guys, I think most of all he needed love :-)
luvs Freya Rose Blossom X

What a wonderful report on the welcoming of Sebastian by the pack. Maybe we are imagining things but there is something about that last photo with his brown eyes and his cute teeth that makes us think Tsar:)

Now THAT is a heart-warming story. I'm so glad he acclimated so well, so quickly.

What a grreat story! I'm so glad to hear that he's settled in and become part of your pack.

Oh this post makes us so happy. Sebastian, keep on relaxing little man. Your new family are amazing and we are so glad they decided to make you a part of their family. Hurray, hurray, hurray! No worries, and love, Stella and Rory (and Carol)

So glad he found a family!

We are so happy for Sebastian! He has found his forever home!

We're glad he found you.

Pei In The Life

Yay, Sebastian! He sure is a smart doggie, to have found your neighborhood and his new home. No surprise that he's feeling like a beloved member of the pack. But don't tear up Bailey's monkey!

I love reading about Sebastian and how he's coming out of his shell, and finding the confidence and place in your pack--I'm glad its been 'without incident' (!!) for me, it always reconfirms that it was just meant to be!

I didn't know Sebastian's background partly b/c I haven't been able to keep up with commenting on blogs lately but I did read a post about him a few weeks ago and wondered how/when you got him. I see that you did a huge favor by giving him a home he deserved! What a lot of patience and love you gave him while adjusting to your home! He is lucky to have you and vice versa!

He found the right house to go to... and i am sure he would not want to go back to his old family now that he has found a better one. Yours and Rob's patience are wonderful.

This is a most heartwarming tale Sue.. thank you for sharing it with us.

I still think Tsar sent him over to you :D

such a sweet transformation. he sounds like a lovely dog and thank you so much for taking him in. he's going to have a good life now.

We think he is MUCH better off for having found your household..... at least he will never be lonely ever again!!

I love the "before" and "after" and most especially, that very last photo. What a beautiful boy... and I can't help but smile as I read the post. :)

He's a beautiful boy and I'm glad he's learning to get along with your pack. Also very glad that Fudge isn't being a goob. g

Slowly but surely he will find his way. How could he not in such a wonderful home?

That story is identical to Cooper's! I am so glad that Sebastian found you. The before and after pictures tell the whole story!!!