Warning, this is a post about poop. We'll understand if you choose to skip it.

As most of you know, we had an awful time last year with sickness. All ten dogs had a bout with Cryptosperidium and Samba and Sky both lost their lives to the infection. This all started back in August and the first symptom of the disease is diarrhea. Most of the dogs had the diarrhea for a week or two, then it gradually went away. We never did get it under control with Samba and Sky.

Very soon after Samba and Sky died, Fudge and Noah got sick again and once again they had nasty diarrhea. After testing, we learned that the two boys had Corona Virus, a puppy disease that adult dogs don't usually get. We started treating them right away, but the diarrhea continued for weeks. 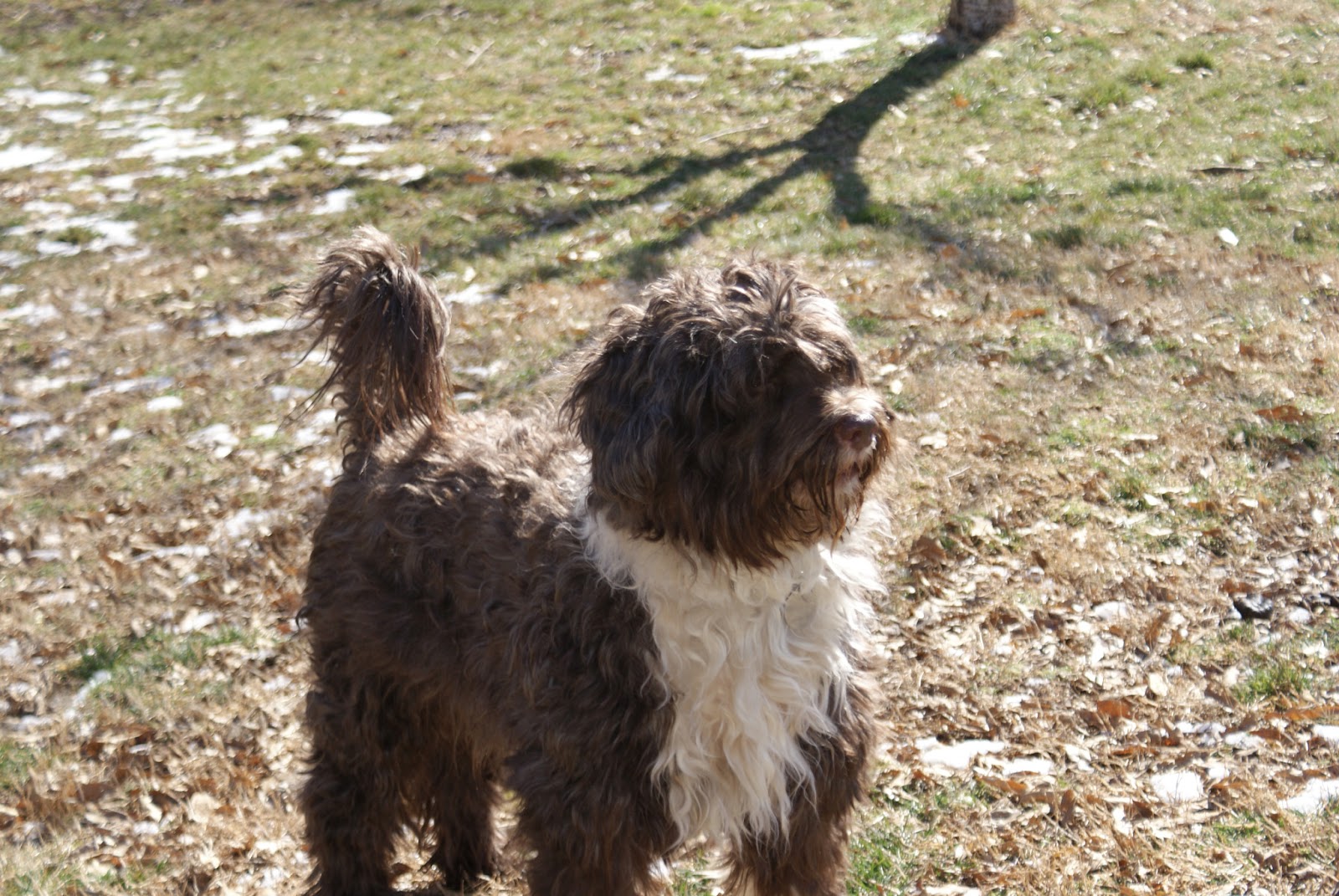 It's been eight months now that Rob and I have been dealing with doggy diarrhea, treating it with medicines, special diets and cleaning up after them. Last month when I talked with Dr B about it, I complained that Fudge and Noah seemed better but their stool was still soft. The doctor said we might have to settle for soft stool and we might not see perfect again.

Well everybody, on Monday Fudge produced a perfect poop. It was firm and formed and the right color. I know it sounds crazy to be so excited about a pile of dog poop, but consider eight months of diarrhea. 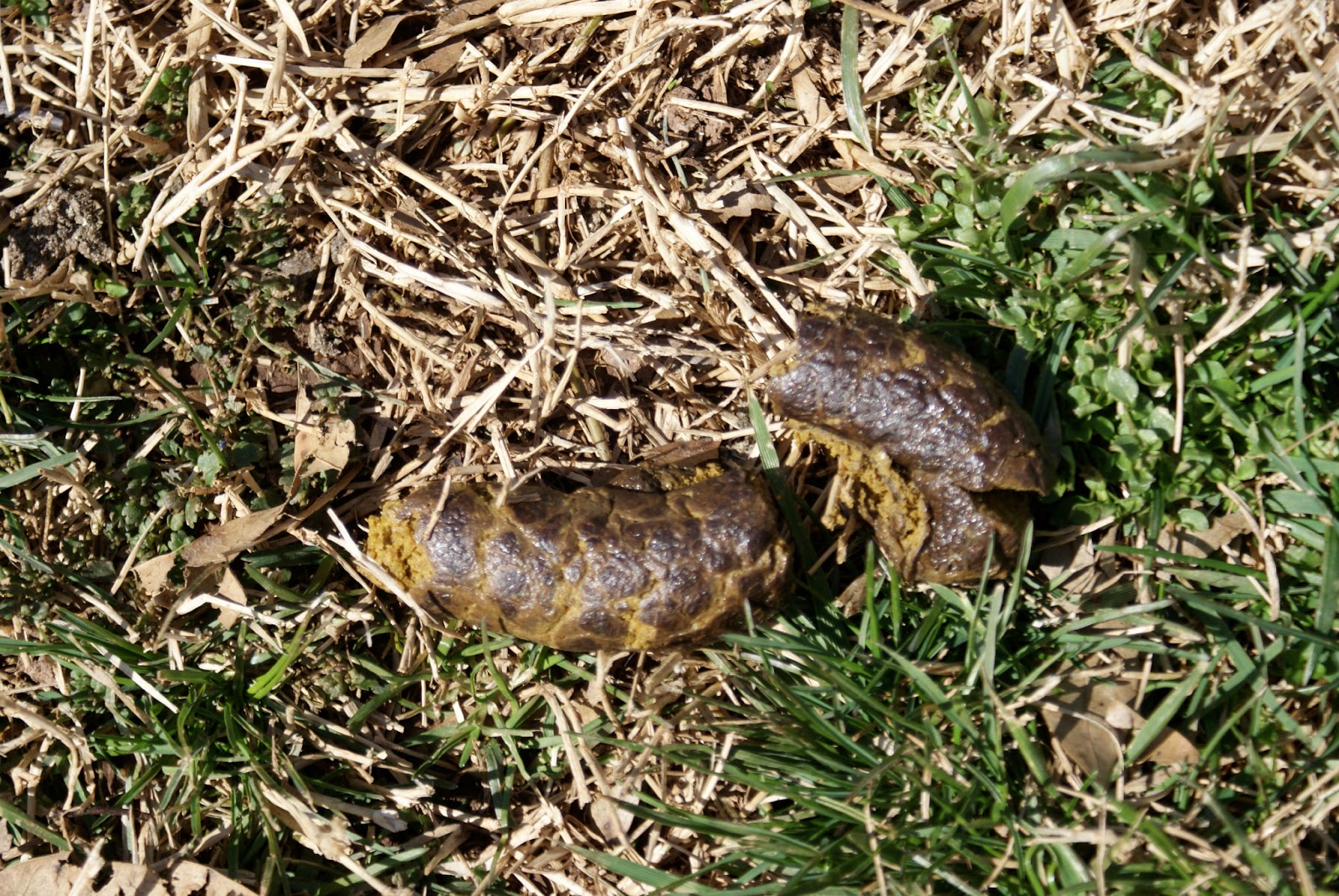 When I told the doctor on Tuesday about Fudge's perfect poop, he said he'd like to see it and he'd hang a picture of it on the wall. So this morning Fudge and I went outside and he did it again. Perfection! I took a picture, printed it and put it in an appropriately ornate frame worthy of the subject matter. Next I'll present it to Dr B to hang on his wall. 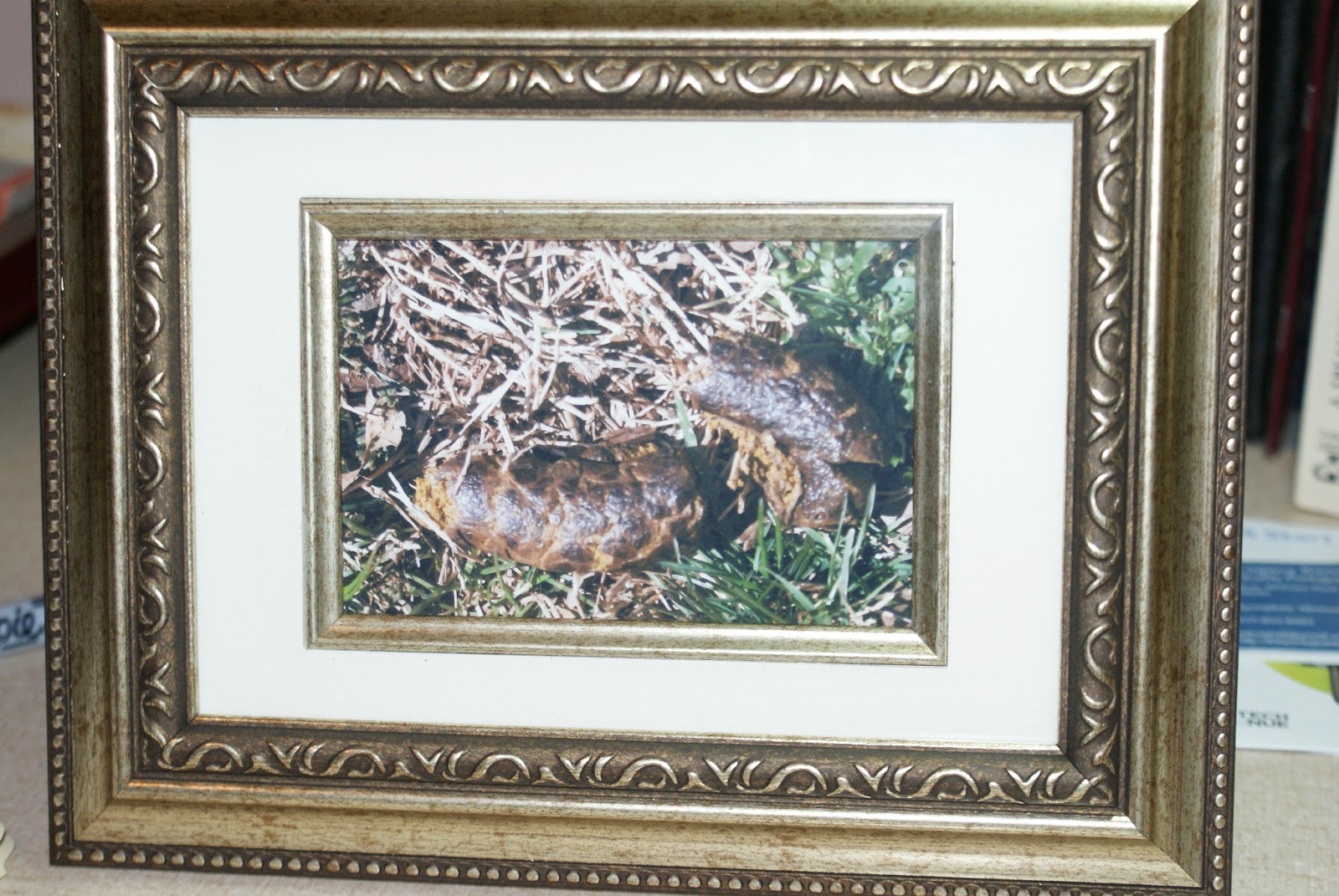 Remember it's been eight very long months to get to this point.
Posted by Sue at 8:30 AM

Mom has never framed a picture of our poop - yet! Well done, Fudge! Keep it firm, buddy!

Oh honey! That is so funny! I know exactly how thrilled you and the good Doc are about the perfect poo! It's a lovely composition and the frame is just the right amount of ornate. g

Anyone who has dealt with digestive issues in their dogs can totally appreciate this post! Congratulations to Fudge on attaining picture-perfect poop! Can't wait to see if Dr. B actually hangs that picture. :-)

It's the little things in life...;-) One never realizes how much you appreciate 'normal' until you have to go through what you all have been through the last few months. Do you guys have any idea where or what this originated from? I'm just very curious. My girls went through a spell between Thanksgiving and Christmas where they needed to go out during the night--every night--but it never seemed to escalate to full out diarrhea. Being in the general same area as you, I just wondered if it was an issue I needed to worry about as well.

Keep up the good work Fudge!

Oh, we totally understand. Sissy is 5.5 years old and we STILL celebrate the perfect poo. Sadly, we don't celebrate daily too often. So, congrats!!

BOLBOL!!! Love it!! Perfect frame, and truly a reason to celebrate! Can't wait to hear Dr. B's reaction to his "gift!"

Perfect is perfect and aren't we happy for you! I can't imagine dealing with diarrhea for 8 months x 2 dogs. You must have been ready to snap! I'd like to award you with the silver turd keychain, that is if I had one!

Mom always comments on our poops... it's kinda embarrassing sometimes!

This is great and, yes, we can also relate to this excitement!

You are such a riot Sue.. to print it out and actually put it in a very nice frame for your vet. But its a good day... i am glad Fudge is finally on the mend.

don't call me crazy...but i go thru my dog's poop every other day too.

Those poops are definitely deserving of an ornate frame.

BOL!!! We talk a lot about poop in rescue, but we haven't seen anyone frame it. That's pawsome.

Oh congratulations!!! We're sure the good Dr will be overjoyed with his thoughtful gift. Bwahaahaa!

I'm sure you will have the biggest smile on your face when you give your vet the framed photo.

Oh, I think everyone with dogs (and kids too) can relate to poo stories especially when you have been through so much. Wonder if your Vet will hang the frame up hehe. Hope your weekend is a great one. No worries, and love, Stella and Rory

Amen and LOL also the other half Robert I was there, no fun through the mess but a happy extrusion at last Amen Amen

You are hilarious! Mine is just as nice
Benny & Lily

You're as bad as us nurses when one of our patients has a good 'poo' when they've been constipated!