As many of you may remember, about a month ago we treated Sebastian for a possible ulcer. He was having vomiting and refusing his food. After a week of antibiotics and soft food, he was feeling good again and we thought he was going to be OK. 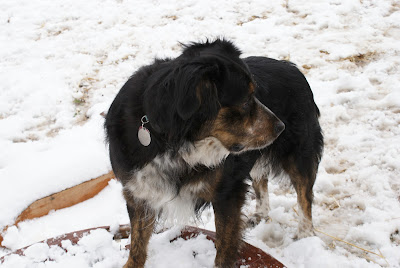 Sunday he vomited and though he ate with a little coaxing, he wasn't enthusiastic about eating. In the evening he was acting really mopey. He didn't want to get up to go outside with the others and he just wanted to curl up and stay put. Monday morning I looked at his gums and they were almost white. That sent us to the vet clinic immediately.

By the time we got to the clinic, he was dancing around and feeling like himself. His gums were also nice and pink. Fortunately our vet trusts us and understands that entering the clinic doors magically makes everything better. He did a checkup and nothing looked wrong so we drew blood for a senior panel. 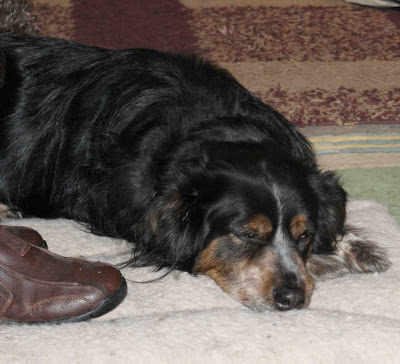 The next morning we were at the clinic with the puppies for their lyme and lepto boosters when the lab repost came in. We were all surprised at the results. Though his white count was perfect, his amylase and lipase counts were both double what they should be. This was a little confusing, but we decided to treat for pancreatitis and redo the blood tests in ten days.

He's now eating prescription I/D food coated with pig pancreas powder and taking an antibiotic. We're cutting out as much fat from his diet as possible. Yesterday he was obviously not feeling well, but today he's feeling much better. he was even up for a walk around the park this morning. 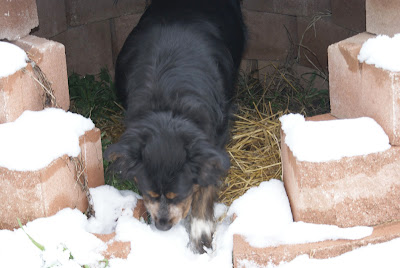 Meanwhile, the little girls had their boosters, then Dr B took his life in his hands by checking out their teeth. They're four months old and ready to exchange their sharp puppy rippers for grown up teeth. Sydney already has four big teeth and when the doctor wiggled one of her baby teeth, it popped out, so she has a couple of spaces in the front of her mouth. 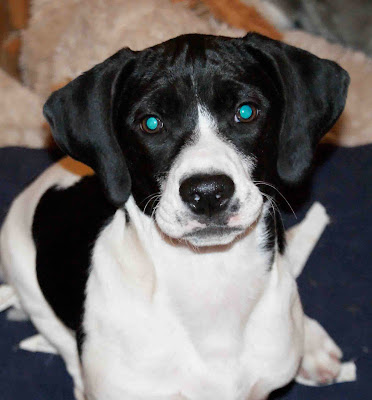 Mackenzie is a little behind her sister and still has all her baby teeth. 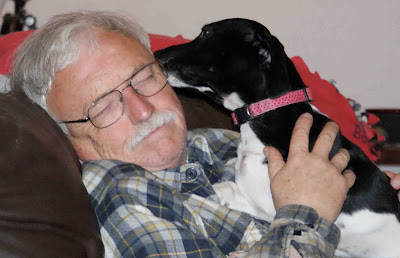 The girls had a good checkup and it erased the memories of the last time when they had microchips inserted. This time there was lots of petting and lots of treats.

Sounds like you are all right on top of this boy's trouble. I just want to see Sebastian feeling good and looking after the two little girlies!

Jo and the girls

So glad Sebastian is doing better, we will still over POTP, OK Boddy.

Your pals
The Mad Scots

Keeping paws crossed and sending healing thoughts to Sebastian. The girls are really growing and so cute,
Wags
Ernie

Sebastian's symptoms do sound a lot like Phantom's. His counts on those factors are off too. We hope Sebastian will do well on his I/D food and the antibiotics should help to reset his system too.

Keep getting better, Sebastian...you're little sisters need you to show them the ropes.

We got all our paws crossed for Sebastian. Please get well soon, pal. Good to see you able to be more active now. Please keep it up.

We hope you are feeling even better today, Sebastian!
Your sissies are just too cute!

All our paws are crossed for Sebastian. Bet the girls are happy that VET visit was better than last time
Snorts,
Benny & Lily

I'm sorry that Sebastian isn't feeling well--But am glad that he's perked up some, and I hope it continues so you can stop worrying... Or do you ever stop worrying? I know I don't!! :-)

PS: THANKS for the good thoughts on our new girl--We are hoping that she's not in chronic liver failure.

Oh good, a condition that can be treated with a diet change.

In the past year you've spent so much time with vets that pretty soon you'll qualify for your own DVM.

The picture of Mac snuggling with Rob is precious, but the one of Syd is beautiful! I'm glad Sebastian seems to be improving. Happy Easter to all of you; I hope the Bunny's good to you.

Hi! First time stopping by for me. Hope Sebastian is feeling better soon! Nice to meet you!

Your baby girls are growing up beautifully. Crossed paws for Sebastian.

Glad the girls got a good check up - they are just precious!