The Weather Outside Is Frightful

We're having cold miserable weather along with a good portion of the country. We don't have much snow, just a dusting on the ground, but it's very cold and the winds are terrible. Last night something crunchy was falling from the sky and this morning Rob's school was closed. The pups run around in the yard for a few minutes, then congregate by the door wanting to come in and warm up.

Last night I finished wrapping and packing the out of town gifts and they went to Fedex this morning. Next the Christmas cards were taken to the post office. Now I have a few local gifts to wrap and one project to put together. Tomorrow I want to start baking so the good holiday smells hang around the house. I'll have to block off the doorway to the kitchen or I'll have so much help I won't be able to move.

Nicki tagged me. This one is about the dogs, so I'll play along. I have to name six thing the dogs like. That's pretty easy.
1. Cookies
2. Dinner
3. Playing in water
4. Chasing each other
5. Spinning
6. Riding in the car
I tag Dianne and her gang of Brittany Spaniels.

Every night before bed I give my dogs yogurt. It started years ago when one of them was on medication and needed something on his stomach before taking his pill. It's a popular routine in our household, newcomers catch on quickly and it signals that it's time to settle down for the night.

After trying many styles and flavors we settled on Yoplait Kids in the strawberry flavor. I chose it because the kids style is thicker than the others and the dogs don't make so much of a mess. I feed them from a spoon and everyone waits for their turn. Samba does try to run from one end of the line to the other to trick me, but I caught on to that trick. I change the order sometimes so nobody feels like they're always last. I just say the name and they are ready. 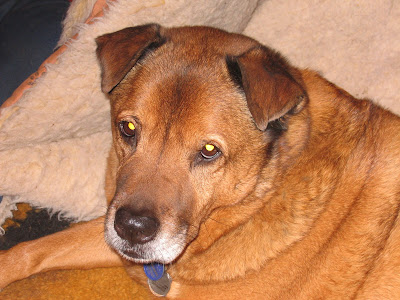 Monty needs routine in his life. He has never dealt well with change. About six weeks ago I was out of yogurt so we went to the store. They were out of kids style, so I bought some regular Yoplait strawberry. When I opened it I noticed it was a lot more runny than the other so I made a note to feed them smaller amounts. We usually feed in the garage so if they do spill some, it doesn't really matter. This yogurt had tiny little pieces of strawberry in it, which I'm sure is appealing to most customers. Not to Monty!!!

The next day I went to a different store and found the kids yogurt. That night I opened it and started serving it. When I came to Monty, he turned his head and refused to try it. 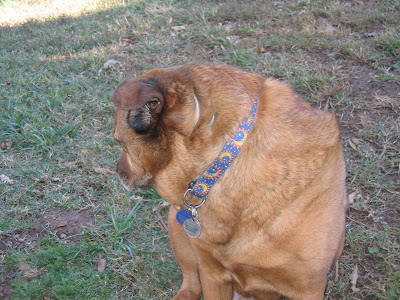 I tried to convince him that this was the kind he liked. No, he was not going to be fooled again. Every night for six weeks I've tried to get Monty to eat his yogurt, but he absolutely refuses to even smell it.

Friday night Rob decided to help me with the nightly routine. When Monty turned his head away, Rob took the spoon and assuring him that this was the kind he liked, he showed it to him and actually got Monty to try it. He had four spoonfuls, then went outside happily. Saturday and Sunday Monty joined the others for yogurt. I guess he's forgiven me for trying to trick him into eating that terrible stuff with pieces in it. Believe me, I will never buy that again. 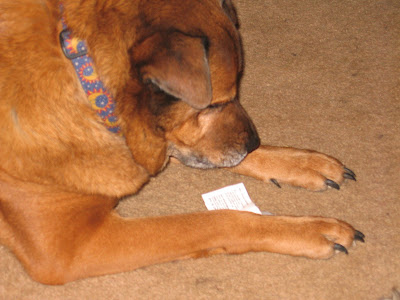 Here's Monty guarding a business card that he stole off the desk. This is his very favorite activity. With any luck Fudge will approach and he can give chase, growling and barking.
Posted by Sue at 3:16 PM

I love it. My hubby tells me all the time dogs can't spit - but we know different. I'm glad he's not mad at you any more. g

Oh, dogs spit, hold grudges and do all sorts of things some say they can't...

Poor Monty. Glad he reconnected with the yogurt of choice.

Wow, you are really organized - I'm so far behind in Christmas stuff it isn't funny. Love Monty's way of punishing you for buying the wrong yogurt. He is hilarious. Thanks for tagging me. Next time I post, I'll play along.

tell monty I don't like yogurt with pieces either!