As you all know, Samba is fighting a miserable disease called Masticatory Muscle Myositis. In easy non-technical terms, her immune system is attacking her jaw muscles.

Until two weeks ago I had never heard of this disease, so I thought I'd share our battle with you as we go thru the treatment.

The muscles of the jaw and temple are made of different matter than any of the other muscles in the body. For some reason, no one knows why, her immune system has decided that these muscles are foreign invaders and need to be wiped out, so it has started destroying them.

The treatment is high doses of steroids over a long period of time. Samba started off at 60 mg of Prednisone a day for two weeks. That's a high dose and we're seeing some nasty side effects. She has been having highly explosive diarrhea for several days and we're having trouble getting it under control. We're giving her special food and some drugs and hoping that when we start tapering her dosage, we can get it under control.

Samba's voice has changed. She used to snore loudly and growl frequently. Now she does neither of those. She had a deep bark, but her bark is now quite high pitched. These are a result of the steroid use.

The muscles in her jaw and temple have deteriorated to the point where she has deep indentations in her skull. Those will probably remain even after treatment. The muscle is destroyed and the surrounding muscles must pick up the slack.

At first Samba was unable to open her mouth and when she tried was in severe pain. With the treatment so far, she has regained some ability to use her mouth. She may never have full range of motion back, but seems to be pain free at this time. 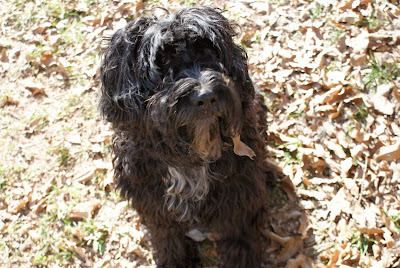 I'm sure we'll go thru a lot more changes during the next six months as we continue treatment, but we'll face them as they come along.
Posted by Sue at 10:29 AM

I have not been by in a while and was so saddened to read this. I just caught up with another dog suffering from the same condition a few weeks ago. The good news - that pooch also seems to be on the mend.

Be strong and know that there are many of us pulling for you...

Please give Samba some extra scratchies from us!

Milo and I send our best wishes for Samba. Poor dear! Our hearts go out to her and you.

We hope that Samba gets some relief and is off the steroids soon.

We're sending you lots of AireZen, Samba! This disease sure doesn't sound like any fun at all.

You're doing everything you can, and I'm sure Samba thanks for your it. That really sounds like a terrible thing to suffer from. Poor girl! How old is she again?

This sounds like a very tough time for poor Samba and Mom too. We hope she continues to show some improvement and that the side effects start to go away too.

oh no.. samba baby this does not sound like much fun at all.. we 3 blue dogs send much healing zen to you -- so that your jaws will get loosey goosey ...a dog's gotta use the mouth... it's like america and apple pie... dogs and jaws and barking... oucheez go away...
many butt bopps to you.
theBUSTER, Ms.Persephone & Ms.Blue

Sorry my get well wishes are late. What a horrible disease for Samba to have, I am sure Samba is getting lots of love and care. best wishes Julie.C

Thank you for educating us. I'm glad Samba is feeling better, but I'm so sorry you - plural - are going through this. Give her a hug from all of us, and then hugs and woofs all around for the rest of your pack.

Everyone here is sending healing vibes to Samba!