I've never lived with a Husky or part Husky before we adopted Tsar. I didn't realize that I was going to have to negotiate everything with this dog. I didn't expect a dog that acted more like a cat than a dog. 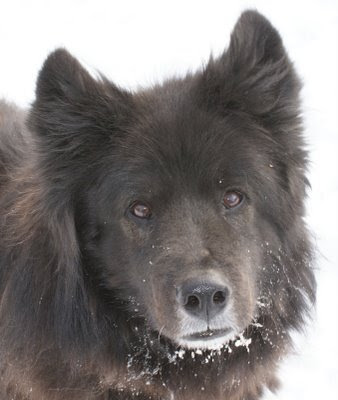 This is a dog that sets his own rules and is so stubborn that eveyone eventually learns to live by his rules, too. He certainly marches to a different drummer than the rest of our pack. 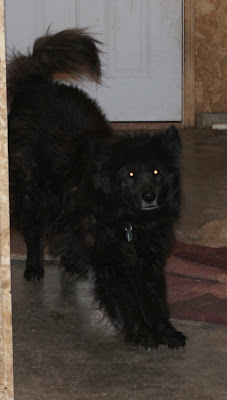 The rest of the pack gets up around 5:30 or 6 AM. Not Tsar, he likes to sleep in till about 10. Fortunately he has a remarkable bladder. 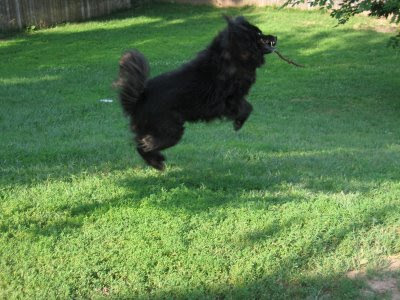 The rest of the pack likes to have us throw balls for them to chase. Not Tsar. He'll find his own ways of amusing himself and they usually don't include anyone else. 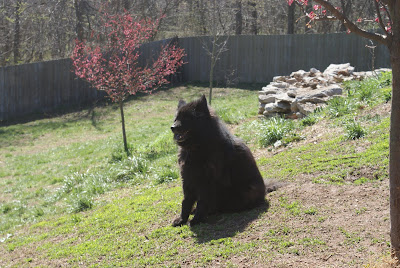 The others come running when I call them. Not Tsar, he decides when he's ready to come inside and would prefer to sit quietly on the hill watching the trees. 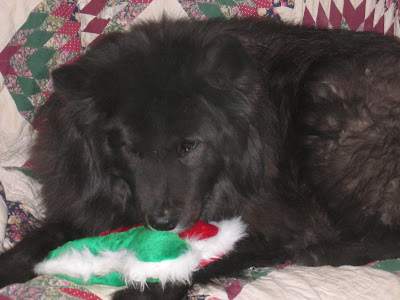 He likes his comfort, curling up on the couch with a blanket or sneaking into our bed when we're not looking. He plays with toys by himself, tossing them in the air, then pouncing on them. He hunts for mice and moles , kills them by pouncing on them, then plays with his kill, just like a cat. He brings us his kill and it never has a mark on it. 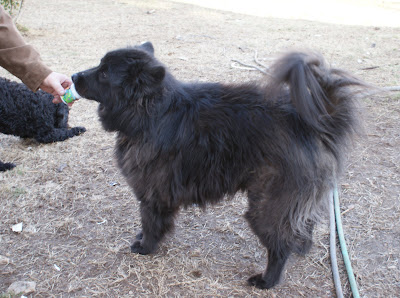 He's a fussy eater. His current favorite food is bagel with cream cheese, no jelly please. I 've fought with him for years about eating. 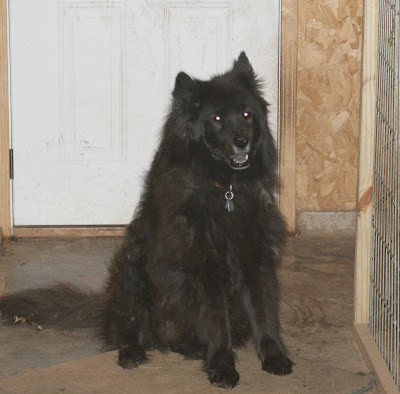 This is dinner time. He's waiting while I prepare his dinner. He likes to eat alone after all the other dogs have eaten and gone outside. He needs quiet in order to concentrate on his food. When he does eat, he picks up each piece of kibble separately and chews it about eighteen times while he either gazes out the window or watches television. 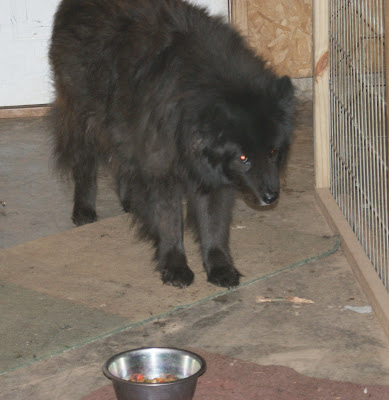 I put his bowl on the mat. It must be on the mat, never on the floor. He looks at it suspiciously. Am I trying to trick him? Is it safe to eat this? 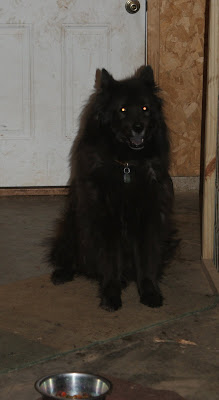 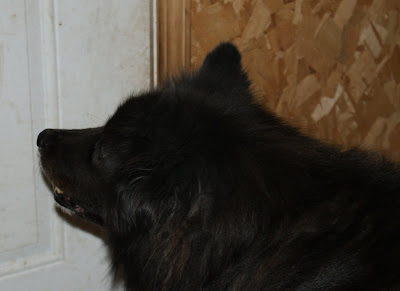 You can put that mess in the refrigerator, I want to go outside now.
He usually eats three or four days a week, yet his weight seldom changes. 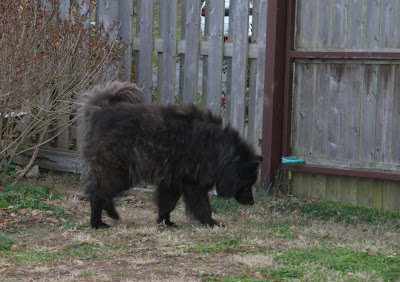 He'd rather eat grass and bugs than that dog food. It isn't just dog food, we've tried offering him all sorts of tasty treats and he refuses them all. He'll eat when he's ready and not before then. Does he sound like a cat? 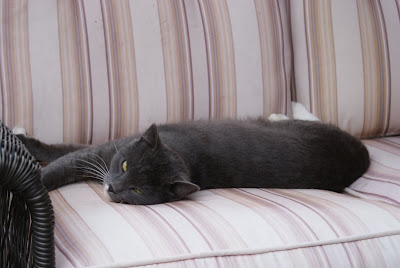 Just in case I don't have enough four legged creatures around here, this neighborhood cat has taken up residence on the porch. He sleeps on the furniture, but usually runs away when we walk onto the porch. Monday he decided he was too comfortable to bother running away and just gave me this evil look when I sat down. I had Samba with me, but he insulted her by rolling onto his back for a more comfortable nap. 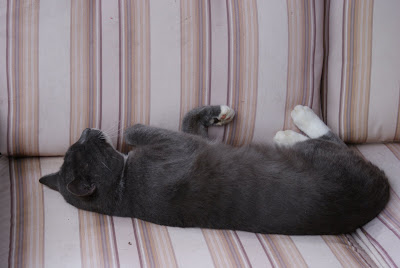 Just what I needed, more attitude.

If you're planning on making gifts for your pets for the holidays, check out Dogs-N-More. There are patterns for knitting, crocheting and sewing toys and blankets. You'll even find instructions for a no-sew fleece blanket that a dog or cat would love.
Posted by Sue at 4:04 PM

How funny - Tsar does sound exactly like a cat! And now the neighbor's cat - how silly coming into a yard with 10 dogs. What was he thinking? g

I think I am in love! Tsar, come and be my boy please, I love independent thinkers, especially canine ones! When I first read your blog, I loved Tsar just from his looks, now its the whole package!

Thanks for the link to DogsNMore.

Tsar sure is a totally different character than the rest of them. But he is so handsome, so I'm sure you forgive him for his stubbornness.

I love Tsar. What a great story.

That's very interesting. Tsar is quite a character! Thanks for more insight into his personality. He's certainly unlike any other dog I've heard of.

Hi Sue,
I just caught up on your blog. My grand daughter and I were wondering what type of dog Tsar is, and now I know. Love the post of the dog show. I had an afhgan hound for 3 weeks once till my ex let him out and he got hit by a car. I was devestated. Love the great danes too! I had one each a harlequin and fawn. Anyway, all your posts are fascinating!

I love that face! Tsar sounds like he thinks he's an only dog. Don't know what those other critters are doing around here! Do you think he and Cat will take up hanging around together?

Ha Rooo - Tsar sounds like a combination of my two boys and a lot like Miss Dakota. That's the beauty of a sibe - they are quite unpredictable and they don't know what it means to do things like everyone else.

Wow! That does sound exactly like a cat.
Huskies are very independent. Does he argue with you? We had one when I was growing us and she argued with us all the time about everything.

He's a funny dog. But cute!

Gosh, Tsar sounds so much like my Happy. Stubborn, strong willed and a mind of her own LOL. Oh yes, fussy eater too!

You do sound like a cat, Tsar!
We can't believe you don't eat 7 days a week! We would starve to death!

Tsar is hilarious! He is one big kitty!

OM DAWG, this is so funny. This is the EXACT same reacting I had when I first had my husky. I was like WT Hell? Is this a CAT? and if I didn't change MY behavior, she would have NEVER acted like a dog. I had to jump up and down and act like a clown when trying to play with her. she eventually did. same thing when "TRAINING" her... she still likes to go off on her own like a cat but hanging around my GSD mix, she actually LIKES being trained and LIKES doing pack oriented things. try taking him for a pack walk... that will really make him packed on to your dogs. Now she chases balls, plays tug and loves to train (well if there's food involved she's there). but it took a LOT of effort to get her to be a DOG! LOL.

Best of luck at the MM show. I see why you entereed him. i ALMOST entered juno, but didn't have the heart. besides she tries so hard to be a dog now!
wags-n-wiggles,
wild dingo (contestents of Juno, Loki and Mr. Wild Dingo)

I, too, have been wondering what kind of dog Tsar was. Hmm...Cat-dog wasn't what came to mind, but now I understand. My mom says we're part ca-dog, too, cause we don't eat all our food at once, and we like to sleep up on the back of the sofa. Barks and woofs, Sasha & Misty