It's cold and we have a little snow. 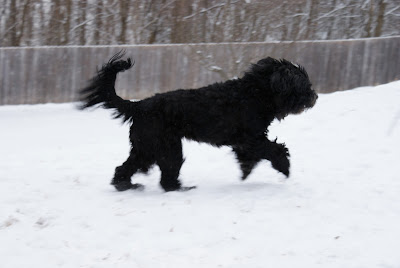 Although I'd like to stay inside on the couch, covered with a quilt and sipping hot tea, the dogs have other ideas. 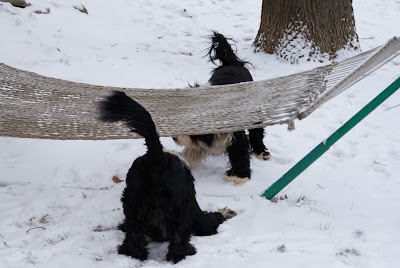 They love playing in the cold white stuff. 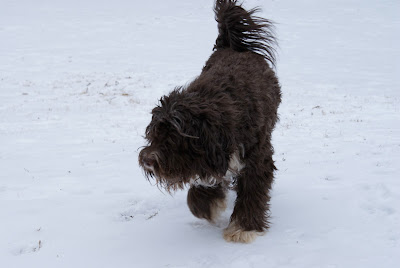 Last night when I took them for their last call, the temperature was 15 degrees. It was so cold. I had a hooded jacket on, but no boots. After running around for a while and a quick game of fetch the glow ball with Tess, we trooped inside for our bedtime cookies. 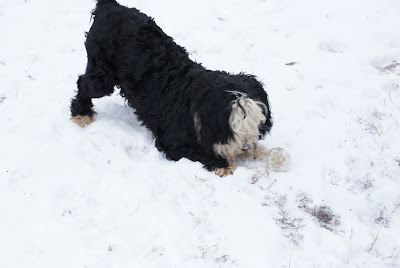 Sky was missing. I went back outside and there he was lying in the terribly cold snow under the holly bush playing with his glowball. I called and called, but he was having too much fun and he ignored me. I didn't want to go slipping and sliding down the hill in the dark, so I tried making strange noises to get his attention. Finally Rob came out to see what was taking so long. Seeing him, Sky decided we were serious and reluctantly got up and came toward us. He took his sweet time climbing the hill, but finally came inside. 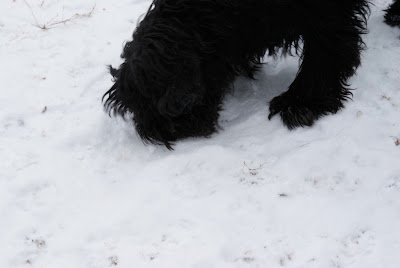 You humans just don't understand how much we LOVE the cold and the snow:) Plus there was a full moon.

Sue's question: Are these dogs crazy?

In a word, YES, they are. All of them except for the little snugglers who like to stay in where its warm.

You have created a monster at my house with your home made cookies.
Now Stella wants to go out about 87 times a day, because when she comes in, she will ask for a cookie. Now its very sub-zero here during the day, so perhaps she is using this as an exercise/treat run, I don't know, but when its 25 below zero I am not interested in opening the door that many times! Just too cold!

I guess if we had furry coats like they do maybe we wouldn't mind being outside either.
Have a great weekend Sue!
x

We usually come when we want to, but we DO respond to 'Do you want some cheese?'

It's nice the dogs are enjoying the cold so much.

Yes. In answer to your last question. Jed does that, too. Sheesh.

We love the snow and colder temps as much as you do, Sky, but thank goodness your mom and dad made you come inside for the night. It's too cold to stay outside for long when the temps are that cold! brrrrrr

We've missed the snow, but haven't missed the cold-bullet! But the dogs never do really seem to mind, do they? I had to chuckle at the glow-ball--We've had one for a long time and it has been mostly forgotten about, but this week it was also finally discovered!

Stay warm and I hope you have a good weekend!!

I just luvs to play in da snow too but mom is gonna keep me indoors more dis weekend cuz it is gonna gets really cold at my house! :( Have fun everybodys!

Too funny. No snow on the ground here, but the same bitter cold, and one big girl who doesn't rush in, not at all...

Oh no - the dogs aren't crazy. The cold and snow are invigorating. They love it. Even mine. g

I want cold and snow SO bad!!!! It's sunny here, again! My goodness when will winter start in Calfornia!?!?!

Crazy mom with no boots :-) No dogs are fine :-) x x x why come in when your having fun in the snow.

They are crazy! We had a high of 16 here today, and temps are scheduled to go negative for the next few days. I think Ryan is about to learn that by state law, there's a 2 hour delay if the temperature is below 6 degrees at 6AM. And I promise I won't gripe about an extra 2 hours sleep. Good luck with the pack, because dogs don't understand the "2 hour delay" concept!

Great pics... it was SO cold here last night that we had some sore paws to warm up when they came in... =( The bitter artic chill is on its way ...

We don't have any snow but it's cold here as usual. Holly's been sitting outside on the backporch for hours and finally came in. I was wondering if she was crazy! She has a great coat though unlike me! Lots of love, Debbie and Holly

BBBrrr, you guys sure look like youare enjoying your self in that cold stuff
Benny & Lily

What a lovely place you must live in ..I too adowe the snow, but since I live in an apawtment, I can only play in it if we go to the wun and my wimpy hoomans have been too cold lately(we live a block fwom the wivew and they claim the winds fweeze them) I just get enewgised. Just like all of you do.
Go play fow me and enjoy evewy minute
smoochie kisses
ASTA

A little snow it looks quite allot to me. Dogs just love it don't they, my Bonnie spends her time with her nose in the snow as we are walking trying not to miss a scent I guess. Julie.C