We had a little snow, just a trace, over Christmas. Many parts of the country have gotten heavy snowfalls so far this winter. We've seen pictures of a lot of you playing in the white stuff. 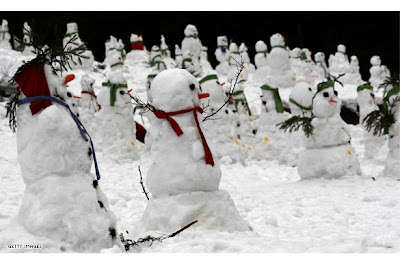 We haven't had enough snow to make a snowman, but I guess some places have. 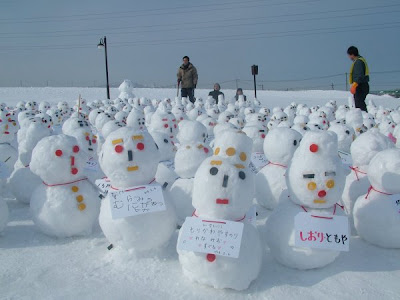 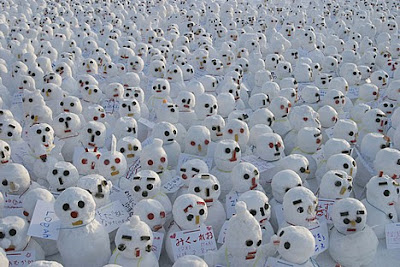 If you only have a very little snow, you could make some little snow birds. 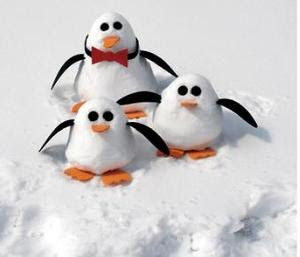 When we lived in Maryland we had a big snowfall and we got together with our neighbors to make this snow bunny. 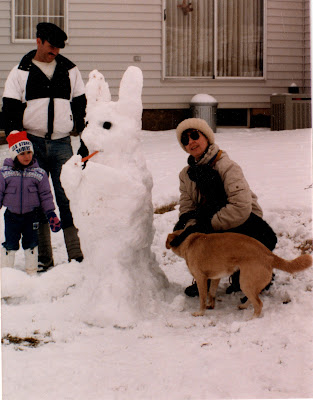 That's our neighbor with his little girl and me with Pylon and Bentley.

Portuguese Water Dogs seem to like snow. At least all the ones I've known have liked it. Somewhere I have a picture of Bentley taken the first time he saw snow. He's covered with snowballs. The snow gets stuck in their curls and snowballs form. Of course, I can't find the picture just now, but I did find some other dogs who will demonstrate what I'm talking about. 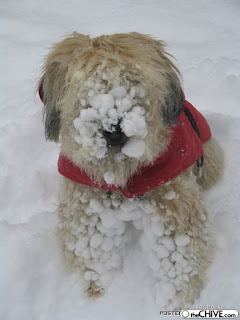 This one is just starting to form snowballs. 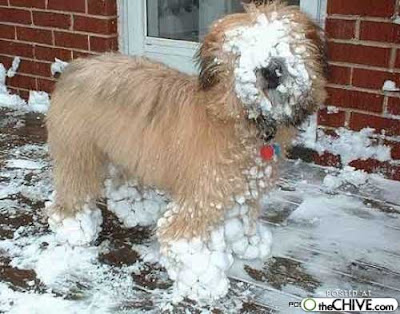 This one has a pretty good collection starting on his legs. 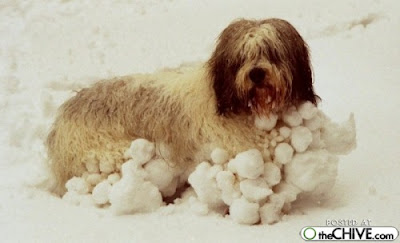 This one may need some help walking to the house. 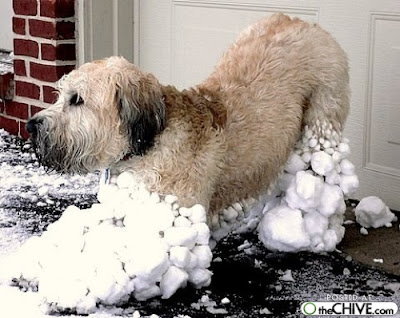 This one is ready to go inside and melt. 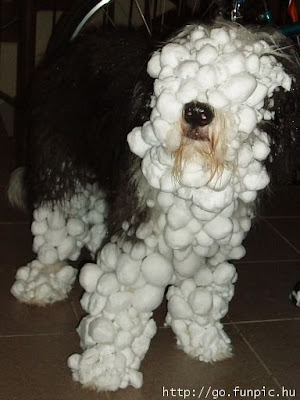 This one is my favorite. This guy had a great time playing in the snow. As soon as all that snow melts, I'll bet he goes out and does it again.

We hope all of you who have snow are having lots of fun with it. We hope we get some soon.
Posted by Sue at 8:07 PM

I love your pictures!! What a crack-up some of the snow-dogs are!! With all the snow we had last year we never built a single snowman--We were too busy trying to dig ourselves out. Maybe this year, but it has to snow first! :-)

Those pictures are hysterical. The ears on the one look familiar. Are mine really that big?
Benny & Lily

You are making all of us sibes drool at the sight of all those snowmen:) Bitter cold coming our way, wonder if any snow will accompany it.

We suppose it IS still water! Love the pictures.

We love those pictures!!! Last year we had a really big snowfall and Holly had little snowballs all over her body! It was the first time I'd ever seen that happen and it took forever to melt them off of her!!! Lots of love, Debbie and Holly

That is so funny! Rugby hates the snow balls that get on his legs and tummy. As soon as they get big enough to make him walk funny he begs to come inside and be melted! :-p

I bet you have LOTS of snow balls to melt at your house!

What a fabulous post! That last picture has us in stitches! He needs some serious defrosting! haha

Great pics... thanks for making me smile this morning! :)

Giggle... I love the attached, self-formed snowballs. We're to have snow today, but the sky sure is BLUE.

Aw what great pictures Sue they were fun, I like the snow birds.
best wishes Julie.C

I have never seen dogs covered in snowballs like that! Those are some riotously funny pictures. I sort of hope you get enough snow to show us Snowball Fudge, but at the same time...you won't mind avoiding the worst of it, now will you? We're getting snow today, but only about 3" in the past 12 hours. I can live with that, unless it continues for 120 hours, of course.

These are the funniest pictures. Thank you for a great end of week laugh!
x

What gweat snow men and doggies
I think I might be pawt powtoogese watew dog cause I looove to stuff my face in the snow and Mommi has to soak my foots in wawm watew when I come inside to get the snow balls off, but I must say I've nevew been as amazing as those guys.
Keep having fun
smoochie kisses
ASTA

Good grief! We had no idea PWD's turned into snowmen under the right conditions. Doesn't all that weight pull on the furs and hurt? We're just guessing here, because snow slips right off of us like water. Which is what one would think it would do to you. Funny, huh? Never see any photos of Bo Obama looking like a snowman.

What fun in the snow! The snowbirds are adorable :D

That was an awful lot of snow that one pup got stuck to him BOL!

Snowballs!! I don't get to bring the snow inside that way but Cali smuggles LOTS of snow in that way. BOL!

Just when I get the snow just right on my fur, my mom person tries to get it all off of me!

That was FUN! Loved all the snow-dogs. And your snow bunny is so original. We have no snow here (just rain), but it's not far away!

Hi Porties! Thanks for visiting us! Love the snow dogs, but Mom's sure glad she just has to dry us off with a towel!

those are funny photos!

when Brody was a pupster and he had that long beautiful puppy hair, it just happened to be a winter when got some meaningful snow. he would come inside with so many snowballs on his legs that the human had to put him in the warm water bathtub to thaw him out! over and over and over! it was funny! the human loved it.

Hi! We're here with the Saturday Pet Blog Hop! Wow, we get snow stuck in our fur a lot, but we've never gotten such great snowballs all over us! We wonder how it feels to those dogs... the snow must be pretty heavy!

Love the pictures.
Found your blog on the Saturday Blog Hop and I'm looking forward to following your adventures.
Love and licks, Winnie x

Great pics of the snowmen,snowbirds and the snowdogs!!
That is some collection of snow balls the pups are wearing!!
Ernie,Sasha,Chica

I love the snow birds! I'll have to keep those in mind when I visit in the grandchildren in the Midwest...where they get lots of snow!