We didn't get nearly as much snow this week as some of you did, but for two days the ground was white and the dogs had fun. 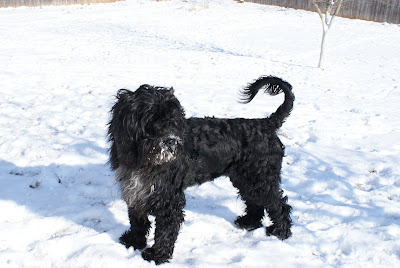 Lola looked around to see where the action was. 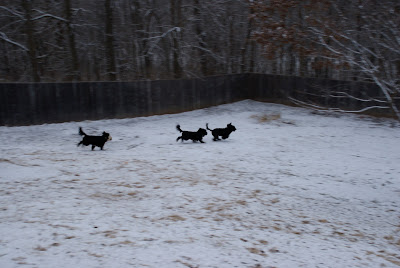 The other girls were zooming around the yard. 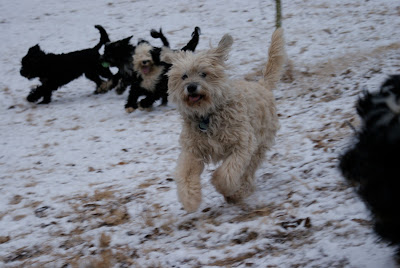 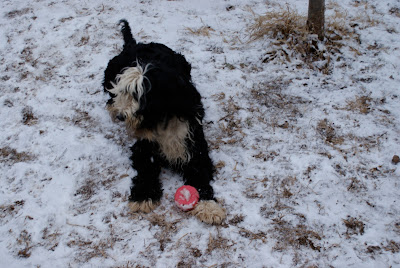 The temperatures were in single digits much of the time, yet they chose to lie on the ground to play with their toys. Norma Jean found a frozen glowball. 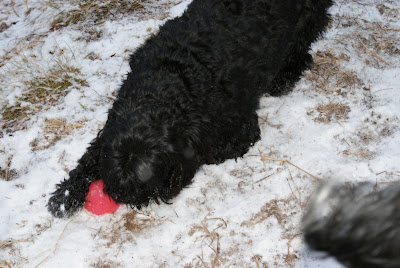 Bailey doesn't mind the cold, either. 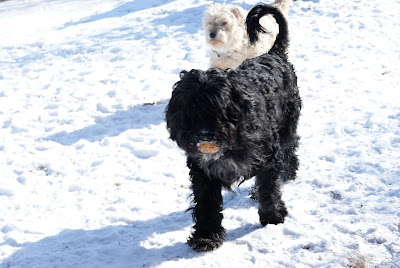 Lola wanted me to throw the ball for her to chase. 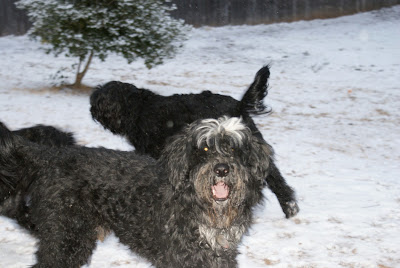 Sky looks happy to have some snow. 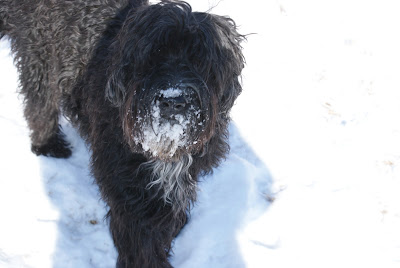 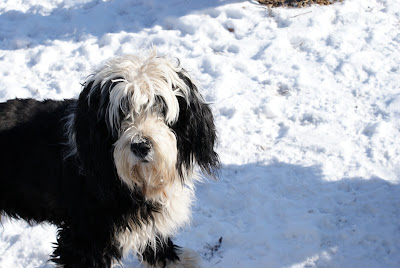 This shot of Noah was before he went off to roll in the snow. 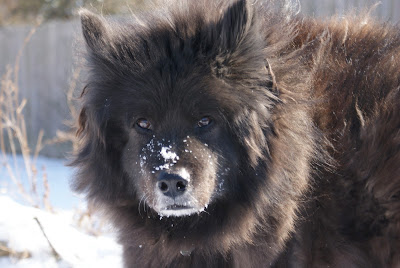 Tsar was probably the happiest of all the dogs. This is what he dreams of all year long. 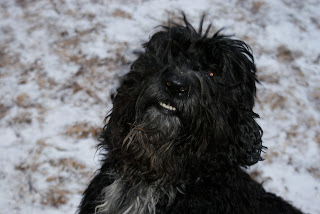 This is the picture that makes me happiest. For more than a year Samba has looked sad in her pictures. She wouldn't open her mouth or look up at the camera. It was as if she was embarrassed by her facial paralysis and her thin, spotty coat. Now look at her. Her coat has grown in, she can blink and move her face and she can open her mouth. Now she smiles for the camera. That's my girl!
Posted by Sue at 12:12 PM

We are jealous of that snow. It sure looks fun
Benny & Lily

I'm so happy to see theiw joy at womping in the snow and so vewy happy that Samba has wecovewed so much..she looks happy as can be and bootiful
It's only ouw hoomans who awe bothewed by the cold..we looove it
smoochie kisses
ASTA

Yes, they look so happy in the snow! And that picture of Samba made us a bit teary.

Awwwwwwwwwwwww - you are making us smile, Samba! It doesn't matter how much snow you get as long as it's white and cold and fun!

Don't they just love the snow? Meg loved whilst it was here.

Our crew made use of the smallest amounts of snow they could play in too! But your crew is certainly outfitted perfectly for it and you can see they are loving everything thing about it!!

Everyone looks like they are having the best time! That's so much fun to see!! We haven't had any snow...just flurries and very bitterly cold temperatures. Lots of love, Holly and mom

I do not like snow! But I live in the south! I digress.....yall look like you are having so much fun! Enjoy!

Oh they are having such a good time. Look at the smile! What a happy girl - I'm tickled for you both.

We're my boy? I didn't see him playing in the snow. g

Looks like you all had fun with that cold white stuff. Our momma was mean...she closed off the gate to the part of the yard with the green stuff all over it. She said Misty kept bringing in mud and green stuff...nice to see Samba smile again...
Woofs. Sasha and Misty

Don't you just love their antics in the snow? Gosh, what pleasure they derive from the white stuff!

Look at your beautiful girl! I want more snow now that my pretty girl can enjoy it.

those are some happy dogs. we love snow days! snow makes dogs go crazy. we love it!

Samba is smiling! And Tsar looks like he's having fun! You can bring them to enjoy the 8" in our yard.

Tsar, Fenris thinks he is a cat to. We bet U two doggies would be best pals if y'all could hang out together. We hardly ever have snow where we live so we aren't sure we would like it. But it looks as if all of you were having a good time.

Samba, we are glad you were having a good time. We are looking forward to getting to know all of you better. Does snow taste good? Mommy said when it snowed when she was little the humans made snow ice-cream and it was tasty.

Now what we really want to know is how do you get your humans outside when it is cold. Ours huddles under the covers and complains about it being too cold to go out and we suspect it is lots warmer here then it is where you live.