I have my own version of the alphabet song that we all learned as little tots. Here's mine. 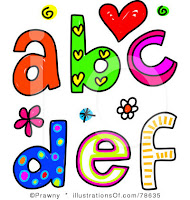 ACL and OCD,
MMM and GME.
We're half way thru the alphabet,
And that's as far as I want to get.

For those of you who are frequent readers, you know what I'm referring to here. For anyone new
dropping by, those are all conditions that my three oldest dogs are currently dealing with.

This afternoon we had an appointment with Dr B to assess Tsar's progress. Keep in mind that we don't really know what is causing Tsar's problem. It could be inflammation in the brain or it could be a tumor. I was understandably anxious going into this exam.

When Dr B entered the exam room he noticed immediately that Tsar's response to him was normal. Tsar usually looks at him suspiciously and backs away from him. He reacted just that way today and this is a good thing. Tsar was able to move his head all around and follow movement with his eyes.

Next Dr B picked up Tsar's back legs and made him walk across the exam room on his front legs. He was able to do it without collapsing or losing balance. Tsar did not like this game at all and shot the doctor a nasty look.

So, Tsar's front legs are stronger than they were, and the problem he's having seems to be a placement problem rather than a weakness. Once he gets moving, he's fine. The swaying we notice at times is just from tiring easily.

We're going to cut his prednisone back to alternate days, the same schedule that Samba is currently on. If this is inflammation we're hoping that his body will adjust and start picking up the slack on the off days. If we're dealing with a tumor, the symptoms will start creeping back and we'll have to change plans. I have to start observing weekly trends now instead of noticing each day and sometimes each hour. Dr B know me too well and knows that I observe the smallest change in behavior. He reminded me that we'll have good days and not as good days.

In the meantime, here is a picture of my miracle girl, Samba, playing over the weekend. She can catch her ball in the air and carry it to us. You'd never know she was sick to watch her at play. 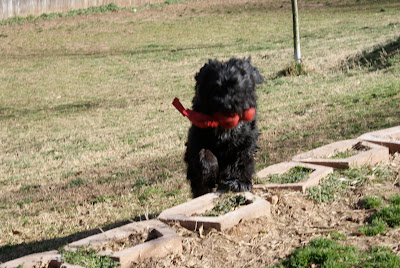 If only they could all do this well.
Posted by Sue at 3:54 PM

I bet Tsar didn't like the two-legged walk! Glad the news was pretty good. And happy to see Samba out playing in the sun.

MY Alphabet song is the one our Mom sings to us:

A,,you're adorable
B, you're so beautiful
C, you're a cutie full of charm
D, you're a darling and on and on and on! We pretend we don't like it but we do (me and Zkhat).

We think it would suit you guys too, especially my BFF Tsar! So we will send it to you one day!

Kisses, and good on Tsar for not taking a chunk out of the Vet's paw as he made him walk 2 legged!

I think maybe we should have a celebration of catch day or something. Sissy seems to know that the Knight and I both take SERIOUS delight in watching her play catch. She even caught something thrown from her blind side last weekend!

And yay Tsar! We're really proud of you, especially since the doctor was MEAN.

We don't think any of us would like to have the doctor make us walk like that either. Here's hoping Tsar continues to do OK with the cutback in the pred.

We're so happy to hear Tsar is improving and Samba is doing so well. Keeping our paws crossed Tsar will continue to improve every day.

Tsar you were a good boy to let the Doctor play wheelbarrow with you. Ha, I would like to see him try that with me. Bet he couldn't pick up my legs! Just let me know if you want me to take your place next time ok buddy? Paws crossed you all keep as well as possible. No worries, and slobber, Rory and Stella

I sure wouldn't like that wheelbarrow game either, Tsar! I hope the prednisone change will be a positive one.
Atta girl, Samba!