We've had lots of people asking about Tsar, so I'll post a little about his condition. 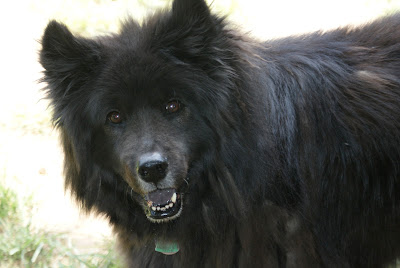 He's currently on 20 mg of prednisone daily and it's helping a lot. He is ravenous and cleans his plate of dog food twice a day and a saucer of yogurt at bedtime. He's never eaten this well for me and I enjoy watching him eat.

He seems pretty clear headed now and observant. He watches birds and squirrels and would like to chase them, but doesn't have the energy. He does take part in group activities with the pack. Most afternoons, weather permitting, I take him and Morgan into the back yard with the other dogs and he either wanders around sniffing or sits on the hill watching the others play. Occasionally he'll chase one of the girls a little. He does seem to tire easily. 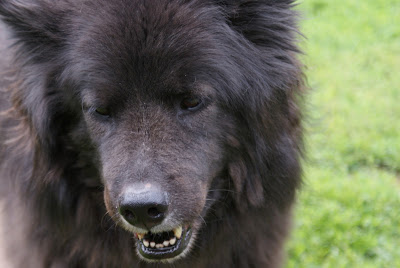 Our problem right now is his front legs. They're better than they were a couple weeks ago. He's no longer tripping over his own feet, but they're weak and don't always work they way we'd like. He has some trouble getting them under him when he tries to get up, but once he starts moving, they seem to work well enough. They're no longer collapsing under him.  In the evening when he's getting tired, he starts swaying a little, but not as much as he did at first. 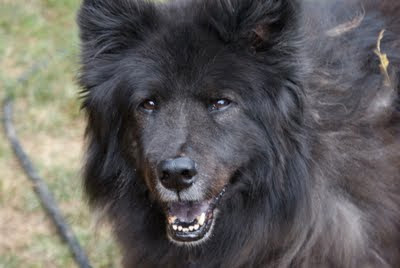 All in all, he's doing better, but he's still a pretty sick boy. His next doctor's visit is on Friday afternoon. It'll be interesting to see what Dr B has to say. We'll let you know.
Posted by Sue at 3:15 PM

I'm so glad to hear he's eating well and he looks brighter-eyed and happy. I hope Dr. B has another trick up his sleeve and more of the front leg strength and general stamina can return.

So glad to hear he's eating SO well! :) Hope his front legs can get stronger... and glad he is getting to enjoy some time with the pack, even if he does tire easily.

We're glad he's still enjoying life...eating...sitting outside...being with the pack. That's what it's all about.

I will be holding thumbs for him and coming by to see how he's doing really soon.

Tsar is my best, handsomest guy dog and I am so happy to hear he is doing better! Maybe he will just overcome his legs weakness and get back to normal.

Thats what we are hoping for!

Thank you for the update. I will continue to send you lots of AireZen, Tsar!

Tell Tsar I'm rooting for him!

His face looks better! I think he is enjoying watching all the action. Good luck at the vet.

We are so happy to hear Tsar is doing a little better and will keep him in our prayers for continued improvement.

If these are current pics, he looks quite alert and happy. Glad to hear he is eating well, now to get those legs working right. Keep us updated on the vet's thoughts.

I agree with the OP Pack, he looks AMAZING! I am glad he is eating and has more energy. I hope his front legs gain some strength back. Thanks for the update, I was wondering how he was doing.

Oh Tsar! We are so glad that you are doing better. Sometimes it's nice to just sit and watch. We're keeping you in our POTP thoughts.

You are such a loving doggie mamma. Tsar is so lucky to have you.

Thanks for the update. I'm glad he's doing better.