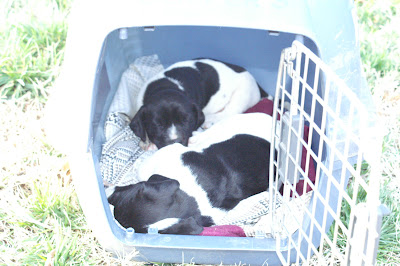 The little girls who remain nameless except for one rather unflattering name that Rob called the larger puppy and had Dr B laughing. We will not be calling one of them "Lard Ass".  The checkup went well yesterday. The larger pup is a full two pounds heavier than her sister and she showed us why. She inhales her food then offers to help her smaller sister. When we hold her to give the smaller pup a chance to finish eating in peace, she squeals and squirms and one would think we were torturing the girl. 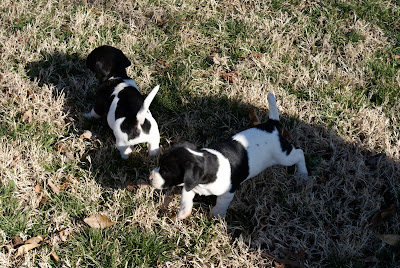 They were both wormed and given vaccines and looked nice and healthy. There were no fleas or ticks and just one scabby ear that showed a tooth hole. Seems the litter did some rather rough playing. It's well on the way to healing, so it's not a problem. 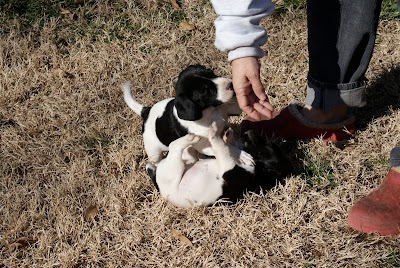 Dr B was rather charmed by the little ones and all the techs in the place came out to hold them. They are giving off some amazing puppy breath, so we all had a good fix.
There were no accidents in the house yesterday or last night, but we did have one this morning. It was a very early morning when big sis woke us all to let us know that she was hungry. After a trip outside and a hearty breakfast, the two fell asleep, but left the rest of us awake. Rob and I started working on their new temporary home. 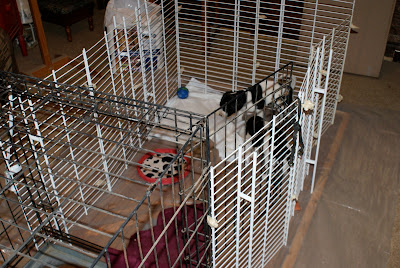 Until the pups have had another round of vaccines and the boys are well, they're being kept apart. Morgan is the only one who has met them, and she wasn't impressed. The pups are living in the library which is off limits to the big dogs. We set up a crate and attached a little run for them so they have room to play, but are confined to one area that's easy to maintain. They're in the room above me as I type this and it sounds as if they're moving the furniture. Their favorite activities are wrestling in the grass and tugging on pantlegs. The larger one is also quite a singer. 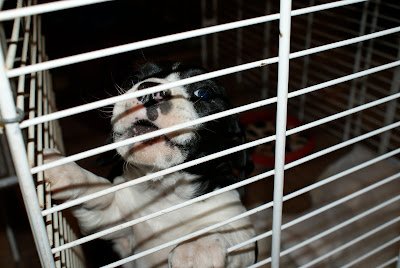 This morning Morgan had her stitches removed and she's all healed up and hair is growing back. Fudge and Noah went along and each had a coronavirus booster. Fudge is at the same weight as last Friday and Noah has gained another two pounds. It was obvious to Dr B that Fudge is feeling better. He greeted the doctor, jumped onto the exam table by himself and when he was finished, he requested a treat. Last time he just laid quietly on the floor and showed no interest in anything. 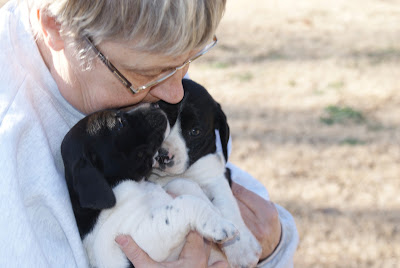 So, though it's been a very busy time, it's been good.

What a wonderful post and we are absolutely in love with that last picture!

I wondered about their little immune systems and the pack tummy troubles...Glad you found a solution without me!! B
oL!!

They are too cute

New puppies sure do breathe life back into a house, don't they! Brings back memories of when Amber and Max were pups. They were raised in an old baby crib. Now we have puppies Shelby and Pepper but they're older and don't need to be confined.

Oh, they are the CUTEST!!! Oh, puppy cuddles, and puppy stuffs...it IS a good busy.
I'm so glads everyone is doin' well. This is well deserved. {{{hugs}}}
Kisses,
Ruby

WOW!! Puppies! Rob sure is a prince among men. We're so happy for all your good news - new puppies, Morgan healing, and especially the boys getting better and not having a life-threatening illness! We're doing our happy dance, too - and not just because it's dinner time. We can't wait to see which of the big dogs adopts the puppies; we're sure someone will step up to mother them.

Glad every one is doing well, and the little ones are awesome, get some welders gloves for the sharp teeth.

Melt. That last photo is amazing. I do confess, I love the Lard Ass suggestion; Sissy is the Redneck *itch according to her Dadaw, and Gg is sometimes called "Fat Ass".

Its going to be so much fun watching these two little girls grown up!

Maybe Lardbuttz needs one of those dishes where you are forced to eat slowly!
http://pets.petsmart.com/brands/martha-stewart/how-to-articles/

Oooh, a singer! I'm quite the singer myself. Maybe I should give your little girls some tips.

They are so darn cute. You can always call her "L A"
BOL
Benny & Lily

Well just look at the lucky pups. ha ha, lard arse, I would be turning around all the time to see if it were me......
Looks like the new girls are going to give you so many smiles. Want me to send over Frankie de tabby to help you keep some order :-) ?
:-) x x x

I think you're right; "Lard Ass" is not an appropriate name. But they are adorable. I'm glad your big boys are continuing to heal, and I'm sure they'll all be ready to play together in no time. Love the last picture, with you snuggling your newest pack members.

Love the pics... and ooh, the puppy breath must be amazing! :)

Howdy Everybuddy. Sounds like life is good. New pups, everybuddy feeling and getting better. Yaahooo! It's funny cause our Dad called Rory 'lard arse' when he was little too hehehe. No worries, and love, Stella and Rory

We've been neglecting our blog (and neglecting visiting others), so trying to catch up on everyone's news. So glad the little tykes got a clean bill of health, and that Morgan, Fudge, and Noah are doing well! Those puppies are adorable--those look like little beagle tails. You are very brave to take on two puppies at once. :-)