This afternoon Fudge and Sebastian visited Dr B. Fudge has a nickel size lump on his chest and I wanted it checked out.

The doctor did a needle biopsy and we had good news. It's a fatty tumor and isn't a problem except that it's located over his breastbone where it can become tender when he lies on a hard surface. I'll make sure he has a soft bed to sleep on and that should resolve the problem. 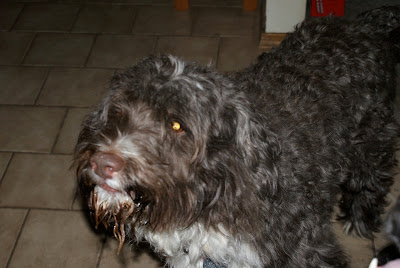 Next was Sebastian's turn and the news wasn't as good. When Sebastian had a cyst removed in November, the doctor found a large amount of scar tissue in the area. He felt that it looked like Sebastian had been bitten by a big dog when he was a puppy. The cyst was removed and some of the scar tissue was removed, but Sebastian has been bothered ever since. He won't leave the incision site alone. He rubs it on the furniture and rolls in the yard and if he gets the chance, he chews at it. We've been keeping him in a jacket and sometimes a cone of shame. Today I took him in for the doctor to look at it. 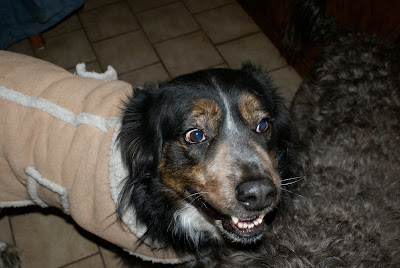 We discussed the problem and Dr B thought there might be a nerve in the area that was bothering him, but on examination he found an opening. It appears that there is some foreign matter in the area from the original injury. It may be to the side of the cyst that was removed or under it, but it's continuing to drain.

On Monday Sebastian will go back into surgery and the doctor will attempt to follow the path of the drainage and remove whatever is causing the area to bother Sebastian. We don't know what exactly we're looking for or where exactly it is, but we need to provide some relief to this poor dog.

Speaking of dog bites, please go visit our friend Gretchen who was attacked by another dog earlier this week. She had emergency surgery last night and isn't feeling great today. 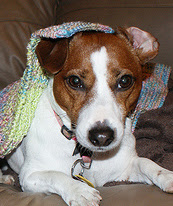 To reward myself for taking four dogs to the vet this week, I made a blackberry pie and I'm going to make a pot of coffee and after the dogs are fed, I'll pig out. 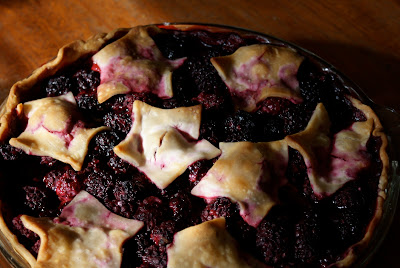 This weekend we'll start introducing the pups to the rest of the pack. This should be interesting! 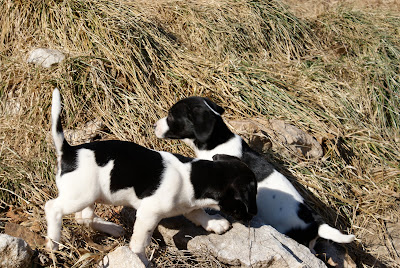 Oh my goodness, good news then not such good news. I will be holding thumbs for the surgery. And I cannot wait to read how the pups gte on when they meet the gang!

Misery doesn't REALLY love company. We're crossing paws and hope that Monday brings the drain removal for Gg and a successful, not too invasive surgery for Sebastian.

So happy for Fudge. Hope the Vet can find whatever you don't know you're looking for. Paws crossed.

Bet you've just about bought your vet a new car...or holiday by now. We helped our Vet put his kids through expensive private schools.

I can be there before the weekend is over - can you save me some pie and coffee?

I'm glad Fudge's lump is nothing and will cross paws that Sebastian can find some relief. g

Oh Sue, you really have a busy doggie life. I'm thrilled abouts Fudge, butts Sebastian, man, poor guy. I'll keep my paws crossed real tight for him! Your such a good Moms! (Just had to tell ya that)
Oh, the pups are so cute...I can't wait to see them in 'the pack'!!
Kisses,
Ruby

We're keeping our paws crossed for Gretchen and Sebastian!

This was good news--bad news. We'll be keeping our paws crossed for Sebastian for an easy surgery and quick recovery. We'll go visit Gretchen now.

Have a nice weekend.

Yikes, we are keeping our paws crossed
Benny & Lily

Oh Sebastian! We hope you can get yourself fixed so no more draining or itching.

We are very happy to hear the good news about Fudge, but feel so bad for poor Sebastian!! Sure hope that you can finally put this to rest once the doctor finds out what is causing the problem. The puppies are so cute!! xo Chloe and LadyBug

Our paws are crossed for you, Sebastian and we continue to send Gretchen lots and lots of AireZen!
Enjoy that blackberry pie. It looks delicious!

We hope that Sebastian's surgery will be ok. We got our paws crossed for him.

Great to know that Fudge is doing good.

We think you need a live-in veterinarian! So sorry Sebastian is still having problems and needs a second surgery! We sure hope this will resolve it once and for all. Good luck with the introductions! Your pie looks delicious! Enjoy!

Ah poor baby... just how it might have been worse for Seb if he hadn't have have your eagle eye's.. always things are as they are.. Lots and lost of love baby and if you need our paws over here, you have 'em.. ah.....
Fudge you know your also a very lucky guy :-) so much love...

Yep babes you piggy out.. pink piggy out and one day we will walk the beaches together to get all the weight back off........... hum... lots and lots and lots of love from us to you all x x x x x x

Excellent news for Mr. Fudge, and I'm hoping Dr. B can solve poor Sebastian's problem. He deserves it, finally having found a wonderful home like yours.

And your pie is beautiful! I'm too lazy to decorate mine so nicely. But at least I'm learning to make pies, or so I keep reminding the kids.

We're going to have to start nipping mama's butt to get her to check our online friends more often. We're sorry Sebastian had to have more surgery but we sure hope this finally solves his problems so he can heal up and get back to a normal, active, happy life. We have our paws crossed.

We're also stunned to read that Gg was attacked and are hastening to her blog.