We've been patiently waiting for over a week to get results from the university and finally the call came. Dr B called me with the results and they're good! 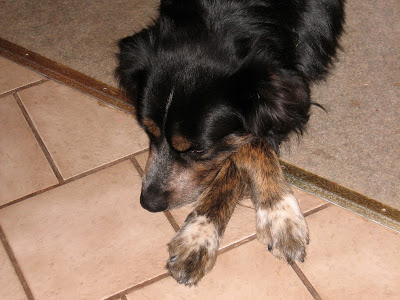 The boys do NOT have cryptosperidium or salmonella.  In fact the results were negative for all but one of the things they tested for. They were positive for corona virus. This was surprising because corona is usually a puppy disease and the boys were vaccinated as young pups. When older dogs get it, it generally runs it's course and doesn't present much of a problem. 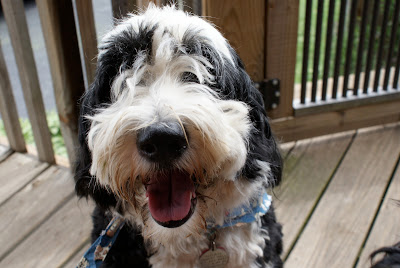 Dr B is a little perplexed as to why Noah and Fudge are so sick, but it could be due to their recent bouts of crypto and can also have something to do with stress. All the dogs were stressed by Samba and Sky's illness and eventual deaths. 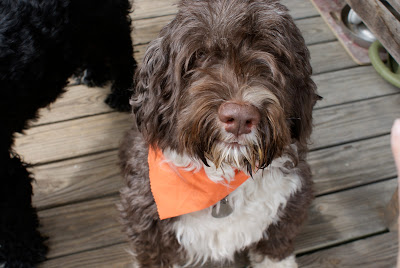 We're staying on top of this with special diet and probiotics. If it hangs on much longer, we'll look for other ways to fight it. But we are so relieved that the boys aren't facing a death sentence, that we're doing a happy dance and might even break out a bottle of champagne. Thanks for all those crossed paws, you are the greatest.
Posted by Sue at 11:21 AM

By Noah and fudges expressions, we think they are relieved also, we will join you in a happy dance.

Woot Woot! We're doing the happy dance for the pack up here in NH! AWESOME news!

We are happy to read your post. the Piappies join you in the dance of joy! We hope that Fudge and Noah feel better really soon.

Oh good! I can't wait to get home and dance with the fur-girls. They'll be so happy to hear the good news!

Freya and I will help you open that bottle. After all that's happened during the last months. GREAT NEWS.... :-) x x x

YEA!!!! Oh, that is indeed good news!!! So glads the boys are gonna be fine.
I'm doin' my happy dance over here, too!
Kisses,
Ruby

This is very GOOD news but we'll be keeping our paws crossed until they're all healthy again.

Glad it wasn't cryptosporidiosis! We hope they are 100% well very soon!