Kerry asked if the girls can be told apart easily. It's a great question because the Porties were very hard to tell apart as puppies. They had to wear different colored collars. Bailey and Lola are  difficult for most people to differentiate and they still sometimes fool me. I have a few tricks to tell which is which. The new pups are much easier and I'll show you how to tell which one you're looking at.

First Syd is noticeably larger than Kenzie, both taller and bigger overall. Most obvious are the faces. Syd has a lot of white on her face. Kenzie's face is mostly black. 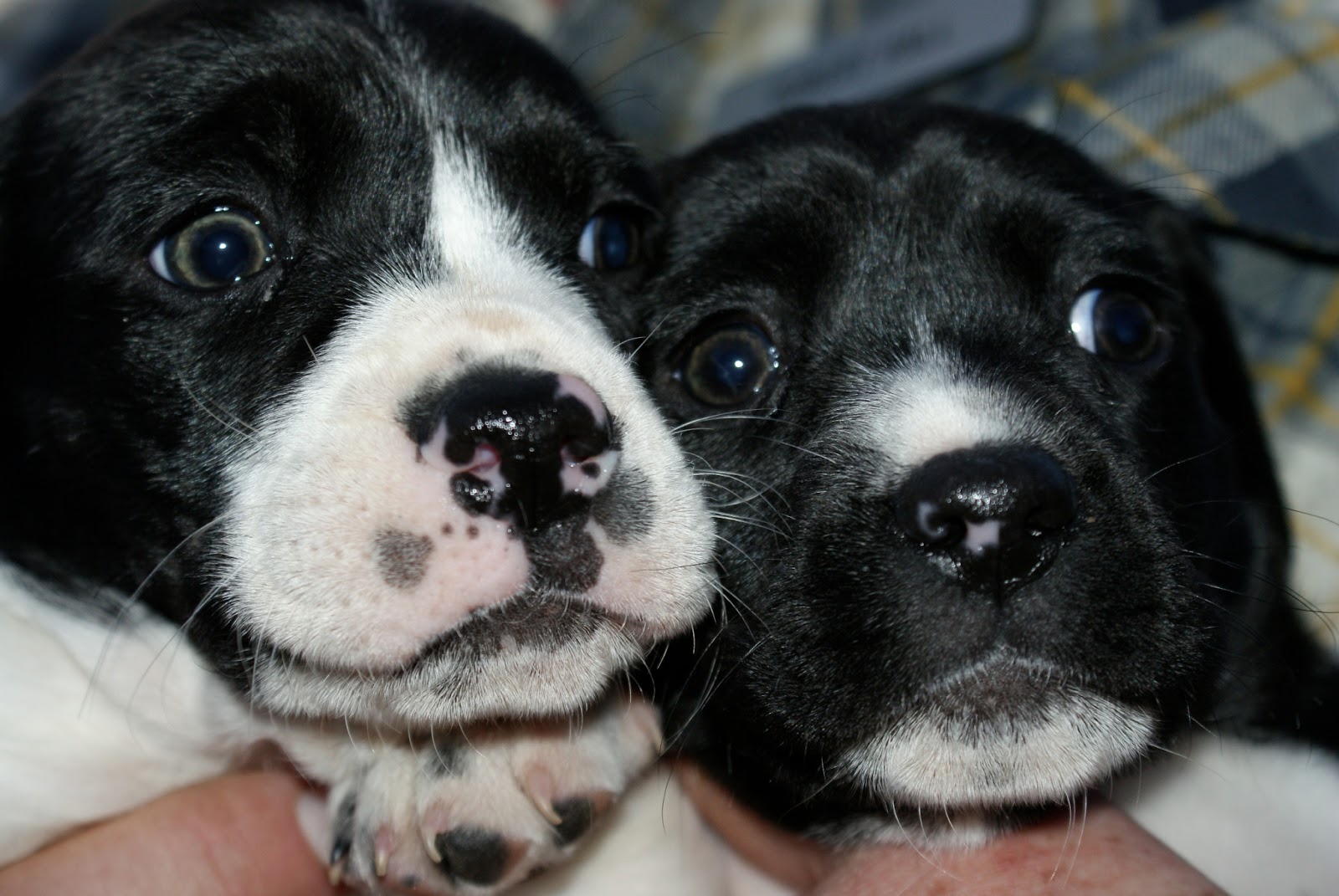 Syd has more white on her body and also has these three little "ladybug" spots on her side. 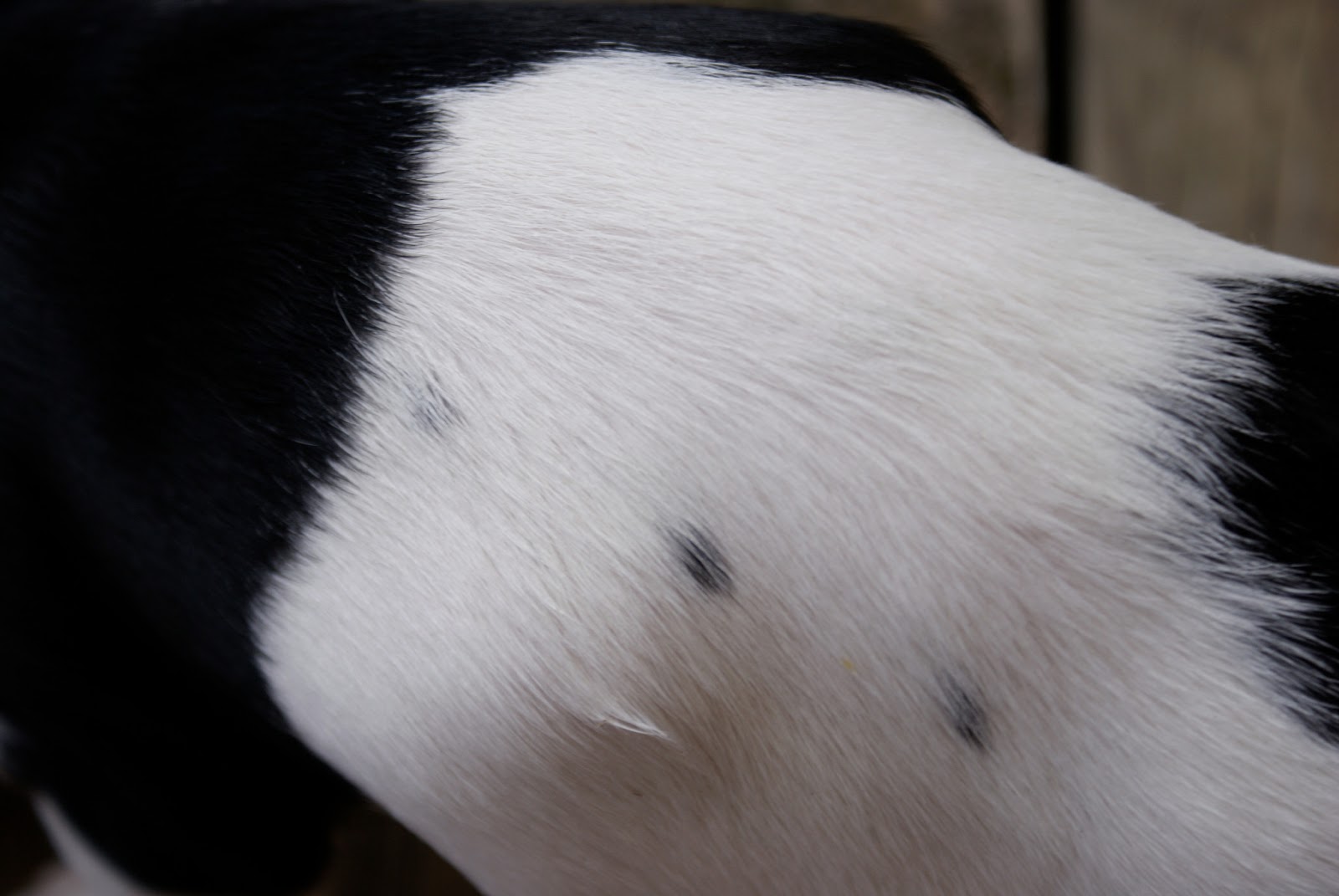 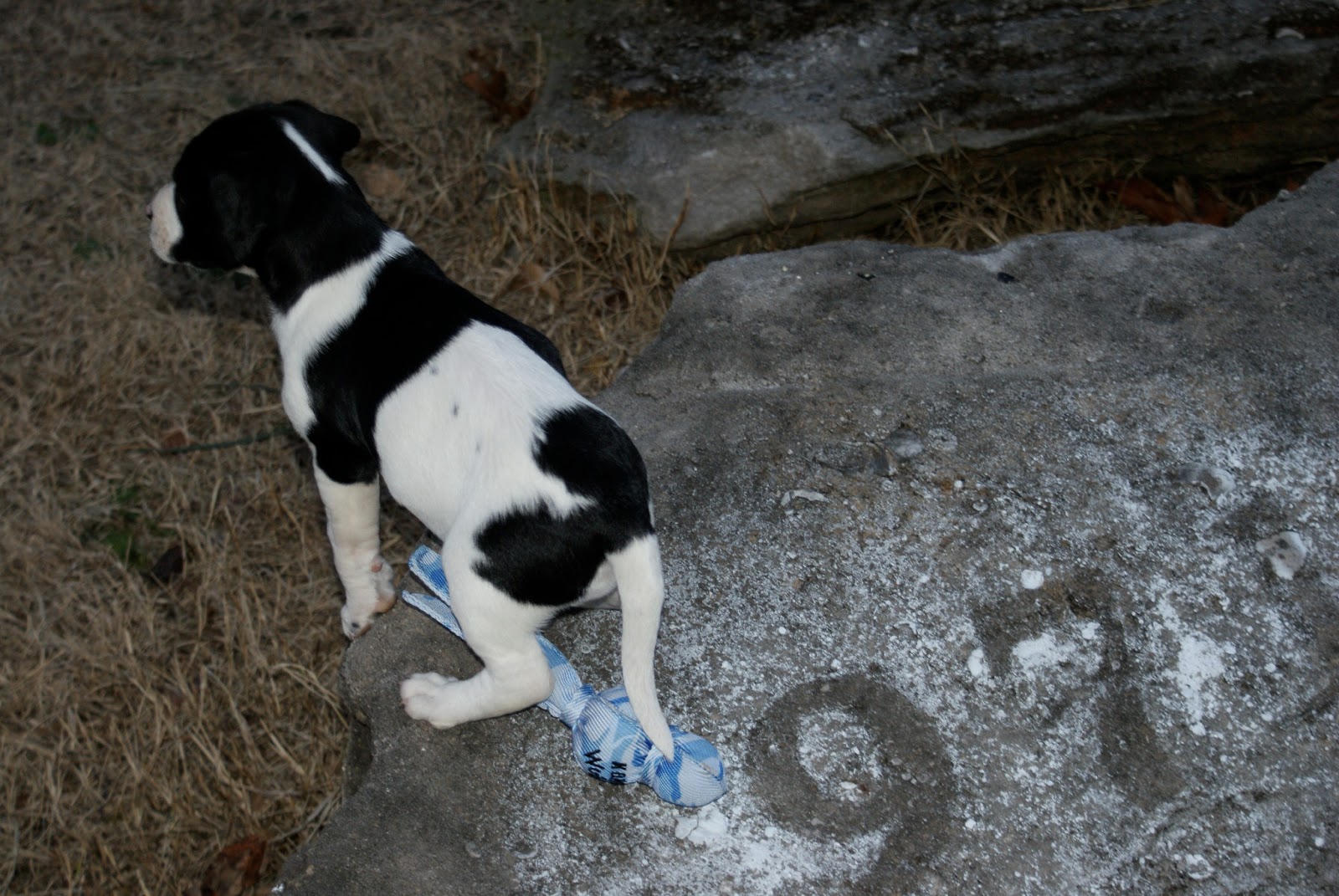 Kenzie's tail has a black stripe. 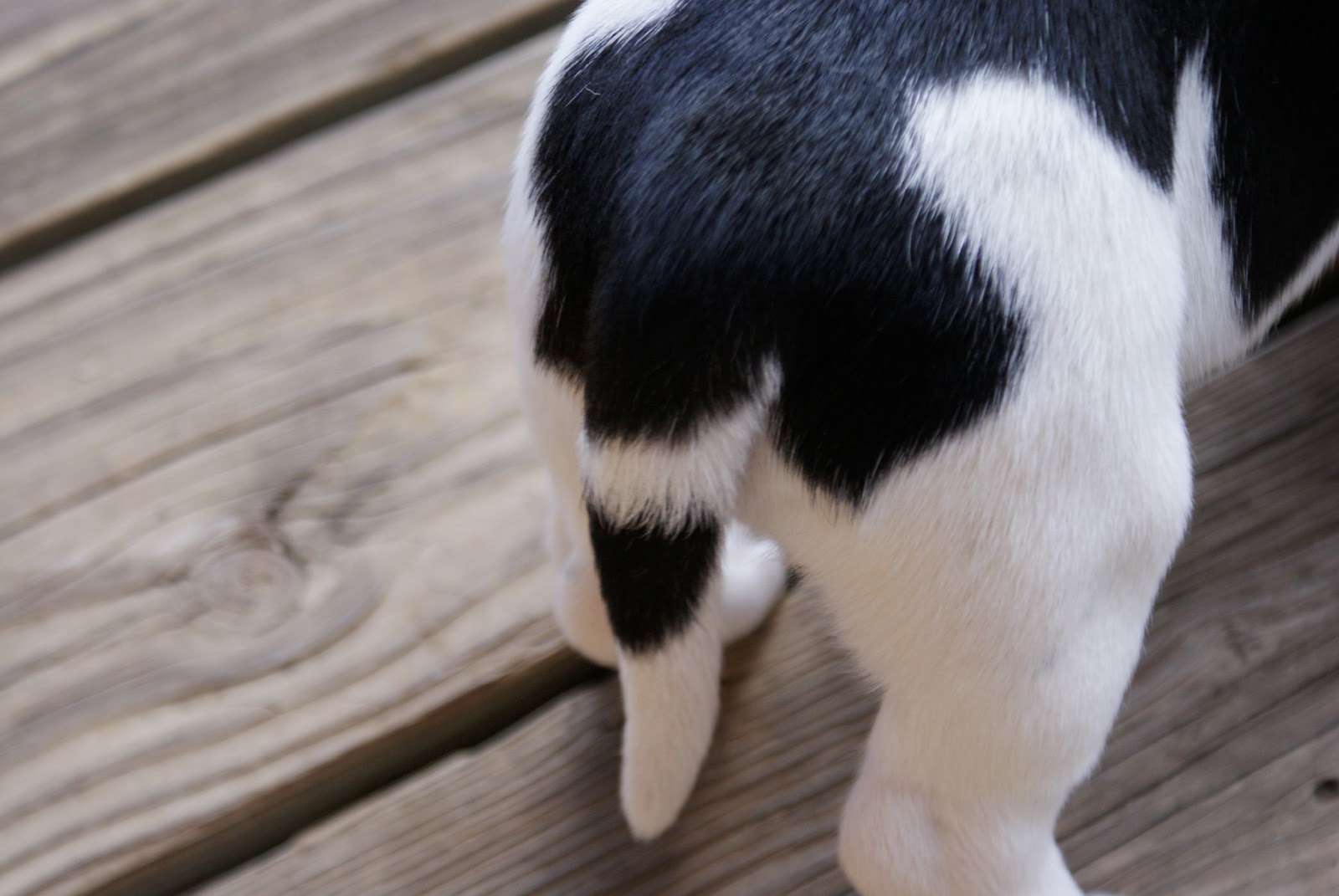 Syd also has a white rectangle on the back of her head. 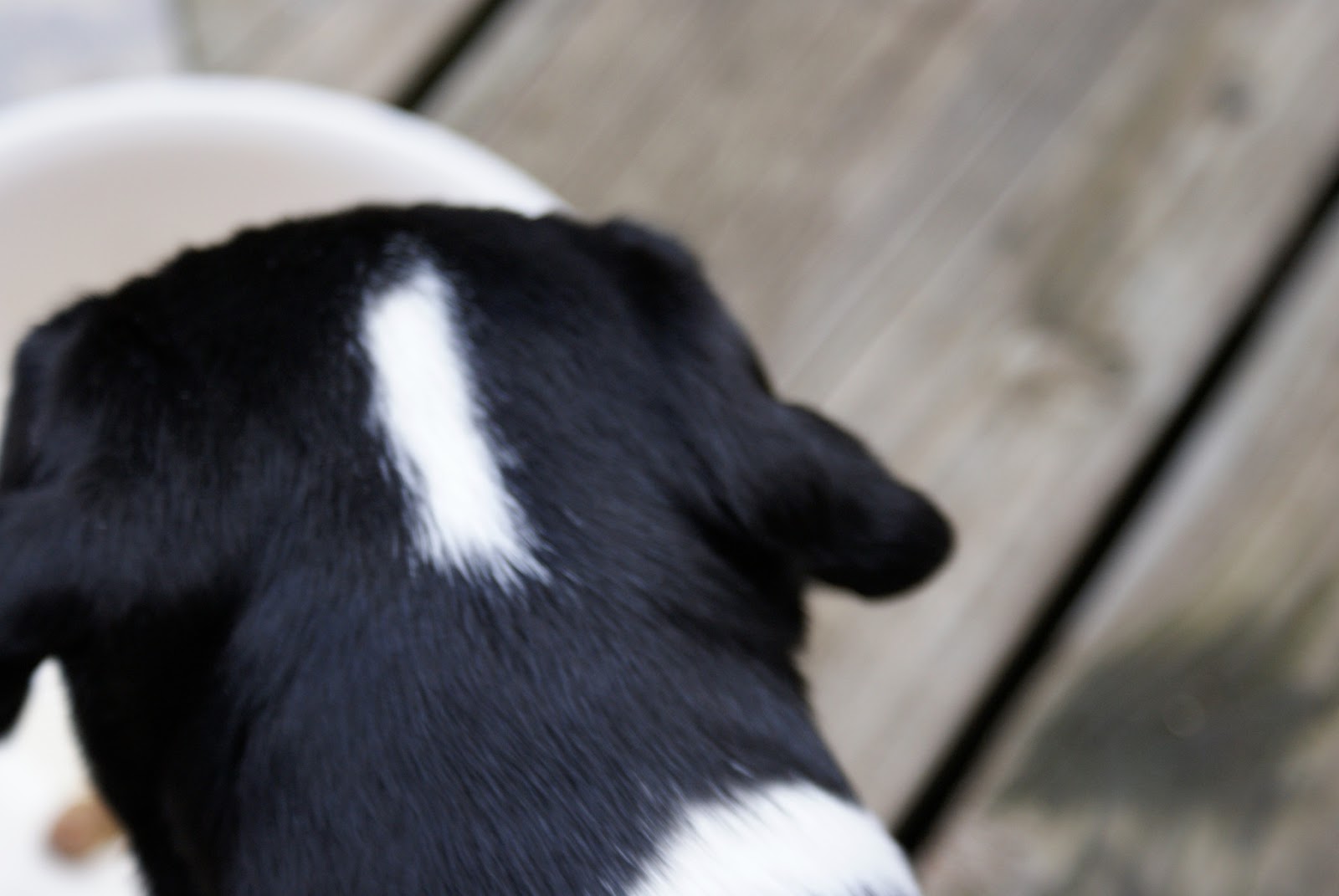 Their personalities so far are also different. Though Syd is very vocal, she's  seems gentler and likes to be held. In fact she begs to be held and settles right down when she's in our arms. Kenzie wants to run or rather hop and investigate everything. She squirms when she's held and clamps her razor blade teeth into hands, arms, clothing or anything else within reach.

We should have no trouble telling them apart.
Posted by Sue at 9:29 PM

Fun "closer look" at the new girls! How big is your newest cuddlebug likely to be when she's grown? And Kenzie? I presume she's apt to remain smaller?

Oh yeah, there are alot of differences, huh? From the front as well as the back, which will be good when your chasin' after them! BOL
Kisses,
Ruby

From front or back, you will know who is who with this pair. Cuter than cute!

They are very different in lots of ways and soooooooooo cute!

Like Wyatts response, Yep your going be chasing them, Ahhhh puppies, hope the rest of the pack gets along with them, and helps develop them into great poochies!

They are simply precious! :)

Oh Sue - I just love their names. Thanks for the indepth look at the girls and their personalities. I love that they already have nicknames - but my favorite has to be the ladybug spots and the striped tail! (I can't remember if they are the same girl or not.) g

Oh my goodness are they adorable
Snorts,
Benny & Lily

OH my oh my - I've been away so long I did not know you had new babies. I'm longing to have a snuggle with a little puppy now. How cute - I look forward to seeing how the rest of your pups welcomes them!