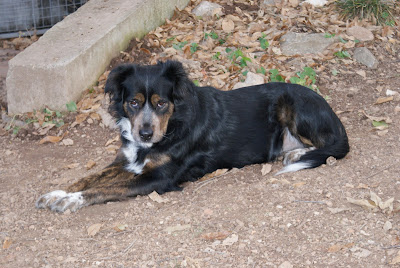 When Sebastian showed up on July 4th, Dr B determined that he was about 18 months old, so he counted backwards and declared January 4th, his new official birthday. So today we're celebrating Sebastian's second birthday. 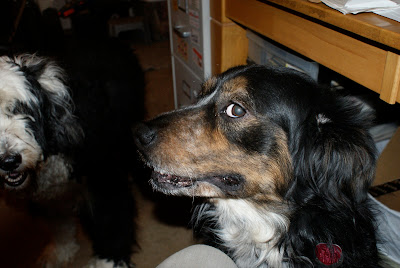 This is a very nice dog. He's gentle and will allow us to do anything with him from bathing to giving pills. He has a really even temperament. 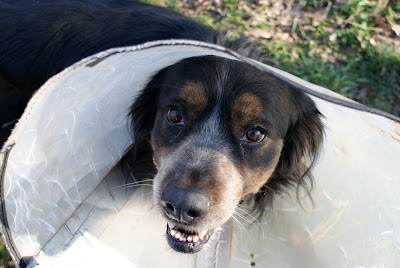 It would be interesting to know his history because he's been well cared for. He knows several commands and can catch and shake hands. He's great with strangers, though he seems to prefer men. He's been taught not to run thru an open door, but waits for us to go first, walks nicely on leash and waits for us going down steps. 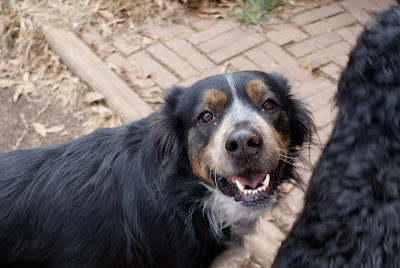 Though he likes to lounge on the furniture, he wouldn't go into the kitchen when he first came to us. Now he will come part way into the kitchen, but then backs out again. He's wearing a jacket and cone again because he won't leave his incision alone. As soon as it heals again, I'll put something bad tasting on it to discourage his attention. 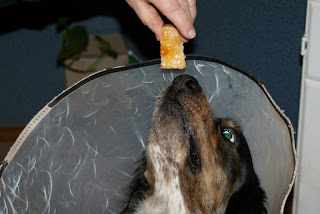 This morning he had marmalade on his toast and tonight he'll get sardines for dinner. Happy birthday, Sebastian.
Posted by Sue at 3:06 PM

Well, HAPPY, HAPPY BARKDAY Sebastian, may you have like 87 hundred more!

Sebastian is a really nice boy. He has gotten to look very happy in the 6 months you've had him. Happy Birthday, big boy, and many more! Enjoy your special dinner.

Happee Birthday, Sebastian!! You sure did score when it comes to 'forever homes'!!

Happy bday Seb. Is he a portie?

He is a gorgeous little guy and I really wonder about "why" he hit the streets. I can see a Mrs. who didn't care for him much and a Mr. who enjoyed training him . . .but thats just my imagination at work. We talked about Tsar helping him find his way to your home and it was a blessing on both sides, however it may have happened.

Happy Birthday, Sebastian! Your Cone looks a LOT like Jed's - bent, to increase flexibility. Sorry you're back in the Cone. Jed's legs have gotten much worse again. 2013 is not off to an auspicious start.

How is Morgan? And Noah & Fudge? Morgan's new flannel coat is lovely and warm looking, which we expect she needs if it's as cold there as it is here. Hope all her incisions are healing.

Happy birthday, Sebastian! You should leave that incision alone so you can stop wearing the evil cone! Enjoy your birthday sardines! You are a lucky guy to have strayed to this home! The fact that he showed up on July 4th makes me wonder--is he afraid of fireworks? Many dogs end up lost on the 4th when they run off in fear.

We've often wondered about Wrigs's background. He was listed as a stray at the shelter, but had obviously been well cared for. I couldn't believe no one went looking for him at the shelter. Another unsolved dog mystery...

Happy birthday, Sebastian! What a nice guy. I'm so glad he found you.

Oh, Happy Happy Brthday Sebastian!! You are such a beautiful boy. Looks like you hit the 'mother load' findin' your furever home!
Hopes you gets lots of sardines for dinner Sebastian ~ yummers!

Happy Birthday Sebastian! You sure did pick the right home to end up at! :)

Happy Birthdayf Sebastian - I'm glad you found the PWD home. I can't believe someone isn't looking for you and sad. :\ g